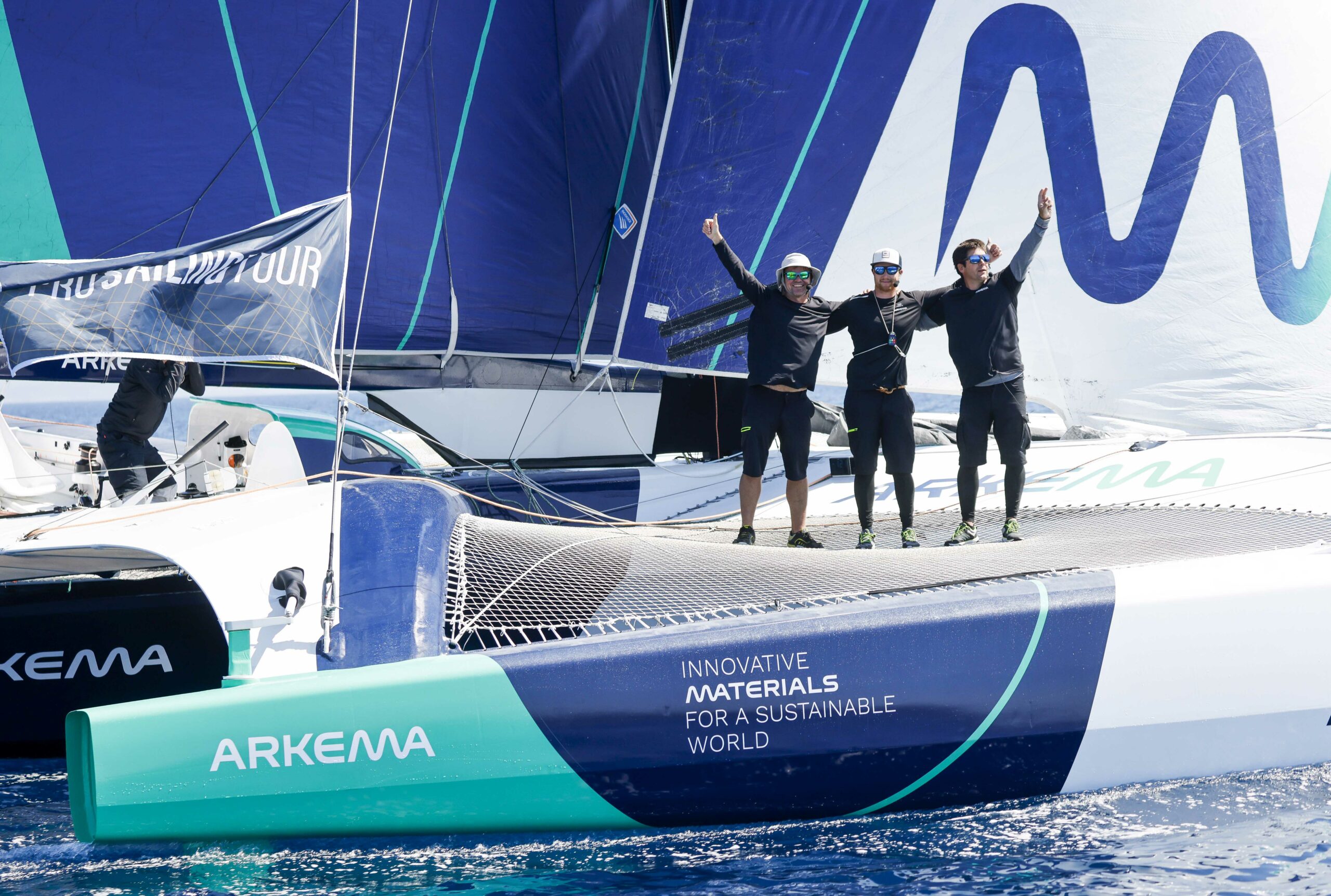 Quentin Vlamynck (FRA), the youngest skipper in the history of the Ocean Fifty class, along with his two crew, Alex Pella (ESP) and Antoine Gautier (FRA), won his first-ever Pro Sailing Tour Episode on Sunday afternoon in Bonifacio, Corsica.

He drove home his preliminary advantage after seven inshore races, by winning the 24-hour Challenge around Southern Corsica by a matter of minutes over close rivals Brit Sam Goodchild on Leyton and Erwan Le Roux (FRA) on Koesio.

This result is a great start to the Pro Sailing Tour season – offshore racing’s most exciting new circuit – for the 28-year-old from the Gironde in France and is sure to set the tone for a hotly contested Episode 2 in Brest from 22-26 June on the waters of Finisterre.

Focus on the 24-hour challenge

From Bonifacio to Ajaccio via the Lavezzi and the Vacca mark not far from the entrance to the bay of Porto-Vecchio, the ultra-demanding 164-mile course took almost 27 hours.

The five teams had to negotiate the vagaries of light winds throughout the night and variable thermals during the day making the race as much a test of nerves as a test of stamina with constant sail changes and regroupings with the rest of the fleet. On such a delicate playing field, never far from the rocks, with unpredictable geographical effects, clarity made the difference.

“I’ve done a lot of racing all over the world, and I don’t remember ever racing with so much intensity,” said Alex Pella, winner of the Route du Rhum, round the world record holder (crewed) and crew member on board Arkema with Quentin Vlamynck. At the foot of the Citadel of Bonifacio, Arkema, Leyton and Koesio arrived within less than nine minutes of one another, with a 72-second gap between Sam Goodchild’s trimaran and Erwan Le Roux.

A magical and epic first episode

The medieval city of Bonifacio rolled out the red carpet for offshore racing’s exciting new circuit and gave the Pro Sailing Tour a warm welcome for the first episode of their four-episode series.

With frenzied inshore races battled out under the hot Corsican sun, followed by a fiercely contested 24-hour Challenge, all against a breath-taking backdrop, this first round of the Pro Sailing Tour 2022 had all the ingredients to make it a huge success.

Groupe GCA – 1001 Sourires and Primonial, two of the seven teams racing in Bonifacio (the eighth Armel Tripon, will return for Episode 2) bowed out of the competition early on after a collision at the start of race four – it was clear from the outset that the level of the Ocean Fifty fleet is extremely high, and the skippers are not holding anything back.

Young skipper, Quentin Vlaminck (28 years old) on Arkema 4 launched in 2020, held the PST title holder, Sam Goodchild (winner of the 2021 edition) on board Leyton in check, while Erwan Le Roux on Koesio, the most recent addition to the fleet, made his rivals tremble on the start lines and throughout the 24-hour Challenge.

Le Roux is the most successful skipper on the Ocean Fifty, with three Transat Jacques Vabre titles and a Route du Rhum victory in 2014 on his scorecard, he is not to be messed with.

Eric Peron (FRA), a newcomer to the Ocean Fifty class, showed skill in steering Komilfo and good speed in light airs, and Thibaut Vauchel-Camus (FRA) aboard Solidaires En Peloton – ARSEP showed himself to be daring with what appeared to be clear-cut options, with his choices sometimes paying off.

Primonial, skippered by Sébastien Rogues (FRA) set the tone from the outset by winning race 2: it was clear that he was aiming for the final podium. With extremely well-prepared multihulls and experienced and talented crews from all disciplines, the skippers are stacking the odds in their favour, determined to dethrone Goodchild onboard Leyton, who was untouchable last year. The numbers talk louder than words: five different winners out of seven inshore races.

Quentin Vlamynck (Arkema) said, “We managed to do a lot of things, but we missed quite a few things too! Nothing was easy, but we managed to take the lead at the end during the 24-hour Challenge, after the Vacca mark. Overall, things went reallt well on board, everyone was on task, and I learned a lot from Alex (Pella) and Antoine (Gautier).

“We were all side by side overnight, it was often very tense. We didn’t give up; we had to manoeuvre a lot and stay very focused on this tricky stretch of water. It’s a first win for Arkema on the Pro Sailing Tour and it’s great for the whole team.”