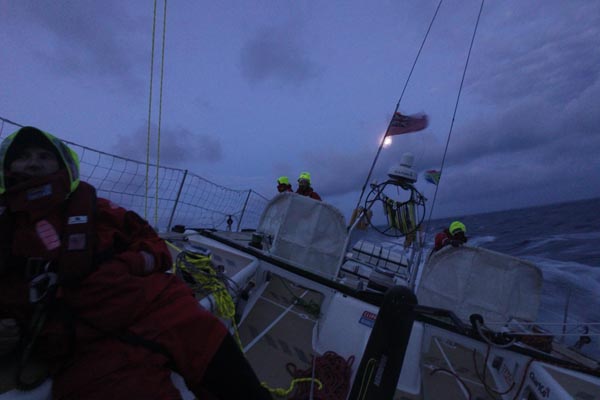 On board Greenings in the Clipper Race

After an intense and action-packed few days since leaving Punta del Este, Uruguay, a high-pressure system has affected many of the teams in the fleet, frustrating their progress in the Stormhoek Race to the Cape of Storms.

Dare To Lead continues to be in first place with a lead of around 20 nautical miles but progress has slowed having sailed just over 30nm over the last twelve hours. Skipper Dale Smyth reports: “We are currently sitting in a high-pressure wind hole, barely making progress. This has been forecast for a couple of days and we have tried to work our way down underneath it on the downwind side but have eventually succumbed to its grip.”

Garmin and Greenings are almost neck-and-neck in second and third place respectively and have also been experiencing light and shifting winds making helming difficult. Garmin Skipper Gaëtan Thomas explains: “You have to imagine that the swell is still here as it's takes some time to disappear but not much wind – it is difficult to see if you are on course or not as all instruments, due to the movements and the gravity of the boat, change and seem to be all over the place, including the windex.”

Further north, a race to the Scoring Gate continues with Liverpool 2018, Visit Seattle and Qingdao (in fourth, fifth and sixth position respectively) gunning to be the first team over the line to take three points, with two points for second and one point for third.

Liverpool 2018 Skipper Lance Shepherd has been frustrated by the shifting winds, saying: “We've been racing to catch Qingdao, who were slightly north of us to begin with, and to keep Visit Seattle behind us in the hopes of getting to the gate first.

“And then the wind changed! It's always the way isn't it. The wind has moved around in front of us and now…we're making very tactical decisions as to when and where to tack in order to hit that gate. By the time that everyone reads this…I hope it will all be over.”

Nikki Henderson, Skipper on board Visit Seattle, which is currently in fourth place, reports: “We are so close to the Scoring Gate, it is like someone is just dangling our favourite sweetie right in front of our eyes but not letting us have it… Reluctantly we have turned almost due north to keep moving, and hope the wind fills in soon from the north west as expected.”

While Qingdao is currently behind Liverpool 2018 and Visit Seattle in the race to Cape Town, the team is best placed for the Scoring Gate, with Skipper, Chris Kobusch, explaining: “The team has done a fantastic job fending Liverpool 2018 off so far, with very good helming in light and challenging conditions and everyone is looking forward to getting through the gate now to take at least a little bit of pressure off.”

The teams behind them appear to have given up on the Scoring Gate and are further south including GREAT Britain in seventh place, whose Skipper, Andy Burns, reports: “The day on deck has been peaceful and the sunset absolutely fantastic. There is a worrying calm around the boat and everyone is well rested for the next onslaught of Southern Atlantic weather as we head south to the rhumb line for more wind and a preferred angle into Cape Town.”

Sanya Serenity Coast is sticking close to the rhumb line in eighth while HotelPlanner.com and Nasdaq, in ninth and tenth respectively, have also tacked south towards the rhumb line.

It has been an eventful couple of days for Unicef back in eleventh place, which has been recovering from a major spinnaker wrap, which damaged its inner forestay, but the team is now making good progress towards Cape Town again. Skipper Bob Beggs explains: “Any events which bring your racing temporarily on hold are a disappointment.

“However, we now have resumed racing, our damaged inner forestay has been shortened, re-terminated and all looks good so we now chase the leading pack ahead. The Code 2 (mediumweight) spinnaker is awaiting a repair session today after its 18 hour wrap but we will repair and fly the kite in short time.”

The high-pressure system that the fleet has been experiencing is moving east and Clipper Race Meteorologist, Simon Rowell, explains that the team should get gradually backing and increasing winds with nothing really strong arriving until tomorrow.  It should be a good sailing day – the high is by its nature a stable system – so the massive gusts that the teams have had for the first 48 hours shouldn’t be there.

Back in Piriapolis, maintenance work on PSP Logistics is progressing well where the boat is being prepared to accept the repaired rudder.

For further updates about PSP Logistics, please keep an eye on the Clipper Race website, and follow the Race Viewer to stay up to date on the fleet’s progress.

All positions were correct at time of publishing.

For further updates about PSP Logistics, please keep an eye on the Clipper Race website.