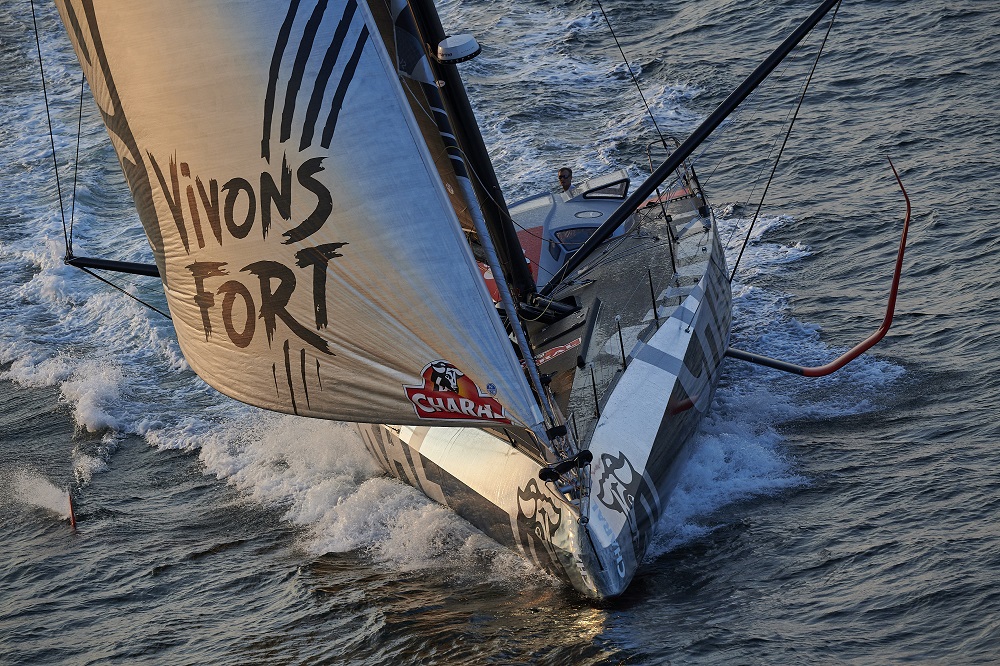 With 20 skippers at the start in St Malo on November 4, including 10 foiling boats, this edition of the Route du Rhum-Destination Guadeloupe in the IMOCA class promises to be competitive and exciting.

In the space of four years, the IMOCA class has been revolutionised with foil technology, which makes the boats even faster than before and more spectacular. But behind the front line contenders, the old generation boats are certainly not dull.
The best performers in this ‘vintage’ match can even hope to compete for podium places in Pointe-à-Pitre.

There were nine IMOCAs in the race in 2014, and there have never been more than 13 in the 40-year history of the solo transatlantic race. The fleet of 20 competitors this year – consisting of 17 men and three women and made up of five nationalities – says a lot about the good health of the class.

This time, the recent technical development in the class means the record for what many skippers regard as a ‘long sprint’ may well come down to 11 days.

Alongside the giant multihulls in the Ultime category, the IMOCA monohulls are the most complex machines of this 11th Route du Rhum-Destination Guadeloupe, with foils, ballast tanks, wingmasts, canting keels and lifting rudders.

In St Malo at the start, the spotlight will be on the triple winner of the Solitaire du Figaro, Jérémie Beyou of France, who is racing his new IMOCA, Charal. This boat – the very latest from the designers VPLP – represents the new generation in the class with its very large and angular foils.

Beyou has posted some spectacular video on social media of his new flying machine which looks exceptionally fast and a real handful to sail.

An interesting unknown will be Alex Thomson (GBR) on Hugo Boss, which he sailed brilliantly to second place in the last Vendee Globe.

Although Thomson is expecting a new boat next year, we do not know whether he has made modifications to the current Hugo Boss – it will be fascinating to see how he gets on against Beyou.

One thing is certain: this fleet will be fighting hard from the word go and it is likely to come right down to the wire off Point-à-Pitre.

On paper, at least, six skippers are capable of winning including Vincent Riou (PRB) and also Britain’s Samantha Davies (Initiatives-Heart) who has shown in recent months that she is right on top of her foiling flyer.

Apart from SMA, skippered by Paul Meilhat, it is difficult to see how the non-foilers will be able to keep pace with their more powerful sisters unless very tough weather in the opening stages plays a decisive hand.

But the battle between the older generation boats will be fascinating. There will be nine 60s originally launched for the 2008 Vendée Globe moored from October 24 in the Duguay-Trouin basin in St Malo. On board will be some very good sailors.

Some may compete for the top overall placings, as demonstrated by Yannick Bestaven (Master CoQ) last year when finishing fifth in the Transat Jacques Vabre on his 2008 Farr design.

In this group, it will be interesting to measure the performance impact of foils added to hulls this winter for example on La Mie Câline-Artipôle and La Fabrique.

New ambitions
In June 2018 the IMOCA class launched the Globe Series, a three-year solo and double-handed racing program. The Vendée Globe 2020 is the highlight and these races are part of the selection process for that event.

The highest points scorer on all eight events will be crowned World Champion in 2021. After the Monaco Globe Series held in June, the Route du Rhum-Destination Guadeloupe is the second race of the year.

However, the future of the IMOCA class is not just about solo and double-handed racing because the class has also been selected as the boats for the next race fully-crewed round-the-world race (the former-Volvo Ocean Race) in 2021-22.