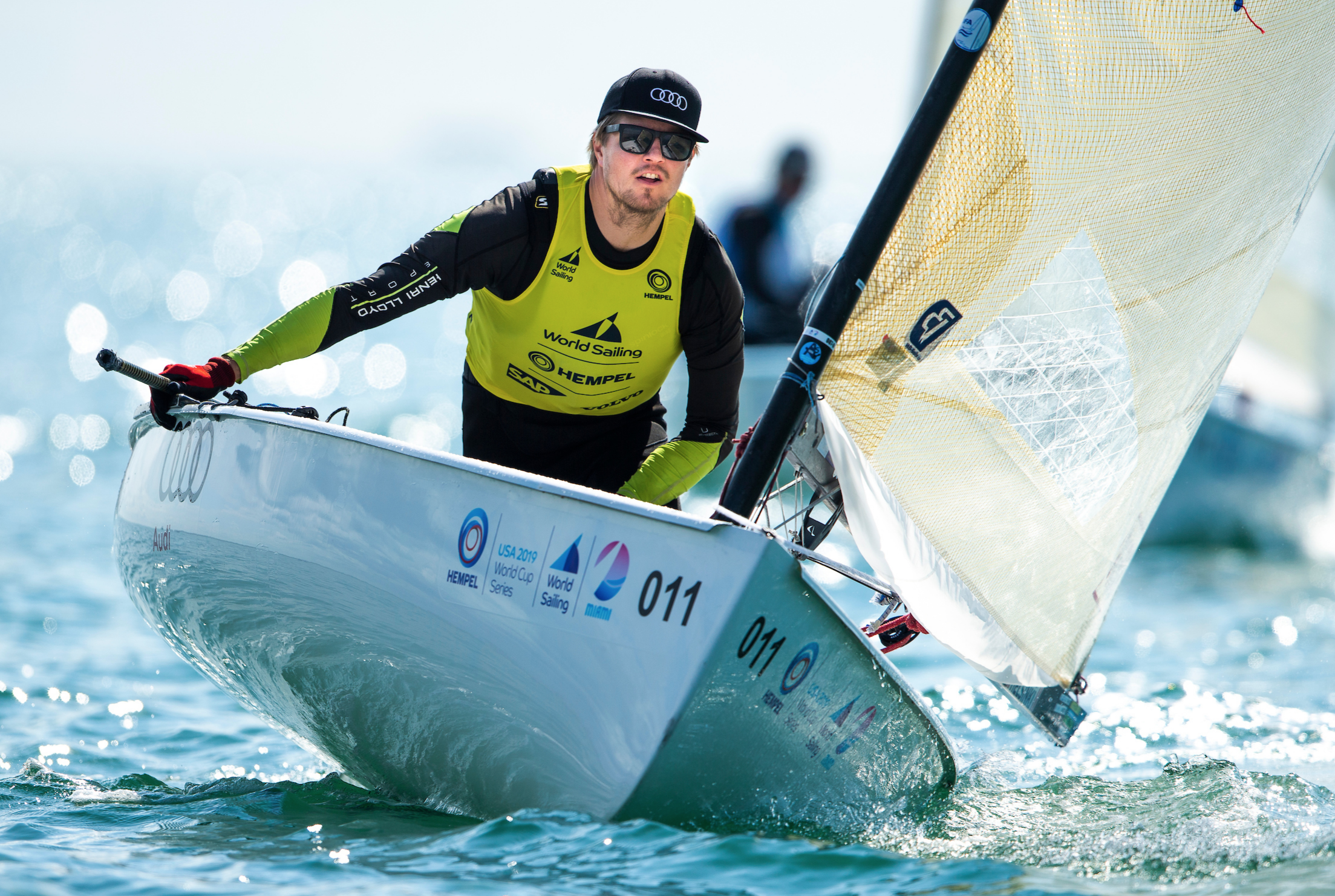 Today’s second race for the Finn class at the 2019 Hempel World Cup Series Miami was something of a microcosm of the regatta so far. It was all about surviving the storm and limiting the damage.

Only this wasn’t the traditional sort of storm, with the thrashing wind and the waves crashing over the deck. Rather, it was a sudden deluge of rain that sent the breeze into a game of hide and seek during the crucial first leg.

So far it’s been that sort of an event for the 29 sailors competing in the Finn. Light air limited the Finn sailors to just two races over the first two days. Today was better, but with the rain cells rolling through the second of three races, the regatta has been a test of mental fortitude more than physical strength.

“Today we were sailing in a little bit lighter breeze than we have expected and we had some dark rain clouds coming in over the course that were really hard to manage,” said Max Salminen (SWE). “Those races you have to somehow survive and wait for the more solid breeze that came in around noon, maybe, 1 p.m.”

Salminen, who won a gold medal as a Star class crew at London 2012 and finished sixth in the Finn at the Rio 2016 Olympic Games, is tied on points for the overall lead with fellow Scandinavian sailor Tapio Nirkko (FIN). Jonathan Lobert (FRA), Nils Theunnick (SUI) and Luke Muller (USA) round out the top five.

“I’m super happy to have survived the light tricky races and to be going good in the breeze,” said Salminen.

Muller, who grew up dodging South Florida rain cells, took advantage of the adverse conditions in Race 2 to record his first win of the regatta.

“I applied a little of my storm-cell knowledge in the bay and that was kind of fun, bringing me back to my youth sailing days,” said Muller. “There was a massive storm cell. We had good pressure for the first half of the [first] upwind and then it started just dropping out of the sky and coming back up, and we were going through 40-plus-degree windshifts. I was really just focusing on staying in the pressure and that seemed to go alright.”

The Finn fleet is a little smaller than in previous years, but Salminen sees no drop off in the talent level.

“There’s a lot of the good guys that we’re expecting to sail the Olympics here,” he said. “And also the smaller fleet is perfect training for the Olympics where we are only 19 on the starting line.”

Most major Finn regattas can see fleets of 80 to 100 boats, and a starting line that might stretch the better part of a half a mile, which requires a different approach.

Charline Picon (FRA) is the defending Olympic champion in the Women’s RS:X. But she came into the Hempel World Series Cup Miami with some doubt about her current standing in the fleet. She is still building back her form after having a daughter less than two years ago.

“For me, going here, it was the beginning of the season so I have to see where I am in the fleet after the winter,” said Picon. “I didn’t train on the RS:X since the beginning of December. I did physical training; because of the pregnancy I have to work on that. I know the other girls did a lot of work [on the RS:X], I was a questioning myself a little bit about where I am in the fleet.”

Picon’s day didn’t start well at all. She felt a little under the weather leaving the dock and then she and the rest of the fleet had to wait out the rainstorm on the water. Once the rain passed, the wind filled in at 8 to 12 knots, right in her sweet spot. But the first race didn’t go as planned.

“It was not easy with the wind moving a lot, going to the right,” said Picon. “The first race I had a good start, but I couldn’t tack for the right, so I was on the wrong side. I did a bit mistake on the downwind because I wasn’t very focused. I do a jibe and [Lilian de Geus] was just there, so I had to do a penalty and I finished 12th or so. So not a good race, but after that I had to do my best and I managed two good races. I had good speed, good downwinds, very good starts, so I’m happy with my day and the form at the moment.”

The strong finish to the day put Picon into second place in the overall standings, after five races, two points behind Zofia Noceti-Kelpacka (POL) and four points in strong of Katy Spychakov (ISR) in third.

While Picon is gauging herself against the fleet as a whole, she’s also keeping a close eye on other French sailors. Last year, in Picon’s absence, Hélène Noesmoen (FRA) won this regatta. And Lucie Belbeoch (FRA) has shown potential as well.

“This year is the year for the selection and there is only one place [in Tokyo in 2020],” said Picon. “I am in front, but I have to be careful and I have to push myself every time to show I am the boss. We don’t know yet [the selection process], I think a committee of selection. I hope not a long selection process because you can lose a lot of energy. I hope to do a good job this season and [leave] no question for the committee.”

Four races today have the 49er class nearly back on schedule. In no fleet has consistency been more elusive. With a pair of race wins to close out the day—after a 17th and an eighth to start it—Rio 2016 bronze medalists Erik Heil and Thomas Ploessel (GER) are now winning by just over six points. The pair was granted average points for their first race, which accounts for the fractional score. Dylan Fletcher-Scott and Stuart Bithell (GBR) are second with Sime Fantela and Mihovil Fantela (CRO) in third. While there’s a significant point spread between first and seventh, the gap between seventh and 14th is much tighter, which will set up a particularly fierce battle tomorrow as everyone aims for a place in the top 10 and a chance to compete in the Medal Race.

Alex Maloney and Molly Meech (NZL) held on to their lead in the 49erFX after a fifth and an 18th, which they discard, from two races. The Kiwis are five points clear of Great Britain’s Charlotte Dobson and Saskia Tidey who claimed a first and a fifth. Ida Marie Baad Nielsen and Marie Thusgaard Olsen (DEN) took the other victory and they are 16th overall.

A pair of Polish sailors have taken command of the Men’s RS:X class. Radoslaw Furmanski (POL) was the top sailor of the day with a fifth, a first, and a second, lifting him 10 points clear of countryman Pawel Tarnowski (POL). Matteo Sanz Lanz (SUI) is third, currently on the wrong side of a tiebreaker with Tarnowski.

Fresher breezes meant lots of foiling for the Nacra 17 fleet, which ripped through four races today and is on track to complete its scheduled 12 before Saturday’s Medal Race. The increased also restored some normalcy to the standings after a lot of inconsistency over the first five races. The top two boats have started to edge away from the fleet. Samuel Albrecht and Gabriela Nicolino de Sá (BRA) maintain the overall lead, but have just four points over Jason Waterhouse and Lisa Darmanin (AUS). Third place, John Gimson and Anna Burnet (GBR) is 16 points further back.

The Men’s and Women’s 470 were unable to race on Wednesday but two good races today has seen their leaderboards take shape.

Agnieszka Skrzypulec and Jolanta Ogar (POL) won both races on Tuesday but did enough to hold on to their lead. They posted a fifth and a 22nd, which they discard. They are on seven points, three clear of Hannah Mills and Eilidh McIntyre (GBR) who won the final race of the day. China’s Mengxi Wei and Yani Xu took the first win of the day and are down in 14th.

The day’s race wins went to the fifth-placed Chinese team of Zangjun Xu and Chao Wang as well as Martin Wrigley and James Taylor (GBR) who are in 15th.

The Laser fleet got into the business end of their competition as Final Series racing commenced. Following two days of qualifying, featuring four races, the top 51-boats advanced to the gold fleet as the hunt for the podium commenced.

Three races were held but scoring for race seven was under review at 18:00 local time. But after race five and six, Norway’s Hermann Tomasgaard was the best performer, continuing his qualification series form in the gold fleet.

He finished fifth in the first race of the day and followed it up with a second. He has a provisional score of fifth in the third race. Tomasgaard’s fifth was his worst result so far and as a result, he discards it. Many of his rivals around him count high scores so the odds are stacked firmly in the young Norwegians favour at this point.

Consistency is hard to come by in the 59-boat Laser Radial fleet and the initiative is swinging back and forth.

Alison Young (GBR) advanced to first overall following a discarded 14th and a seventh. Anne-Marie Rindom (DEN) is second overall, a point off Young, following a win in the final race of the day. However, Rindom came 49th in the race prior and discards the score so will have to tread carefully over the coming days.

Lithuania’s Viktoriha Andrulyte snapped up the other race win and is third.

Racing resumes once again at the earlier time of 10:00. The 49er, 49erFX, Nacra and RS:X fleets will sail their final day of qualification ahead of Saturday’s Medal Races.