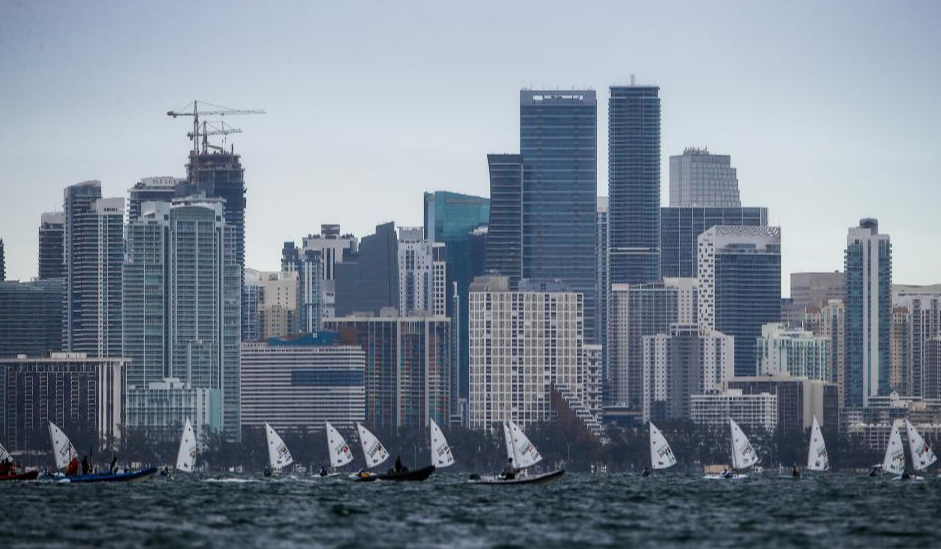 It was a rich get richer sort of day at the 2019 Hempel World Cup Series Miami, and during each of the first two races for the Women’s 49erFX fleet, Alex Maloney and Molly Meech (NZL) found themselves in very liquid situations—financially speaking – converting strong starts into race wins with relative ease.

“Starts were really important today,” said Maloney. “In the first two races, we kind of got away, and it made a big difference for the first beat. The rest of the race was a lot easier. For the last race we were kind of back in the pack and decision-making and tight boat-on-boat situations were a lot harder. Just getting a little bit of a clear lane and away from the fleet in the first half of the first beat was pretty beneficial.”

Their result in today’s third race was a 10th, but with the throwout applied and yesterday’s second added to the total, the antipodean pair find themselves 11 points clear of second place after two days of racing. Sophie Weguelin and Sophie Ainsworth (GBR) and Stephanie Roble and Margaret Shea (USA) are tied with 15 points, with the British team technically in second due to the tie-breaking protocol.

“It was pretty light and shifty,” said Maloney, when asked about the conditions they faced on Day 2 of the second stop on the 2019 Hempel World Cup Series, “and you were always on your toes. You could be confident in one side, but it was kind of the day that you wanted to be protecting both sides when you were in the lead because there was a little bit of snakes and ladders out there. Overall it was a fun day and we’re happy to come away with our scoreboard.”

The 49erFX is one of two Olympic classes that debuted at the 2016 Rio Games and the fleet continues to evolve as the sailors who were there from the beginning grow more comfortable with the nuances of skiff sailing and other talented sailors are lured in by the boat’s easy speed and strict one-design class rules.

“The class is becoming a bit older and there’s more depth in the fleet,” said Maloney, the Rio 2016 silver medallist. “The racing is closer and you can’t get away with a few things you used to be able to get away with. There’s definitely more depth and anything under 14 knots, the boats are going pretty similar speeds and it’s more tactical. There’s more of speed differential as it gets windier. As a fleet we’re getting a lot sharper and more aggressive on the start line. Our low speed boathandling control is a lot better than it used to be. You used to see the girls set up away from the line and more sail into it but now we’re just the same as the guys crabbing and getting a little more aggressive on the start line.”

After three races yesterday, the 49er was able to squeeze in just a single race. Benjamin Bildstein and David Hussl (AUT) won that lone race, but a tough first day has them mired in 15th place. The big winners of the day were Nevin Snow and Mac Agnese (USA) who finished second in the race and jumped into the overall lead, with Day 1 leaders Sime Fantela and Mihovil Fantela (CRO) in second by a point and James Peters and Fynn Sterritt (GBR) in third, two points further back.

The Laser fleet finished its qualifying series with two more races and will start Gold and Silver Fleet racing tomorrow. Hermann Tamasgaard (NOR) added a first and a fourth to his scoreline and is currently winning by three points over Sam Meech (NZL) and seven points over William de Smet (BEL). But this fleet is particularly tightly packed with just five points separating defending OIympic gold medalist Tom Burton (AUS) in fifth with Jean Baptiste Bernaz (FRA) in 15th.

“The regatta really starts tomorrow with everyone in Gold Fleet,” said Chris Barnard (USA) who is currently seventh.

Monika Mikkola (FIN) won the only Laser Radial race and is leading the fleet with two races in the books. But it’s tight at the top. Mikkola is tied on points with Alison Young (GBR) and Zoe Thomson (AUS) is just a point behind that pair.

“I just got some pressure first and was able to make it simple,” said Mikkola of today’s race. “It was a bit of a combination of being in right place at the right time and a bit of luck. We’ve only done two races now, so it’s all open. And all the girls here are phenomenal. It’s going to be really hard. Tomorrow there’s supposed to be a bit more wind so you’ll probably see the more usual names at the top of the leaderboard.”

The light wind specialists in the Men’s and Women’s RS:X came to the forefront in challenging light breeze on Biscayne Bay.

Chinese racers have always been known to excel in light wind and Mengfan Gao was the personification of this statement out on the race track.

In a variable 5- to 8-knot breeze, Gao grabbed the lead on the first upwind and never relinquished it, finishing more than 20 seconds ahead of Poland’s Maciej Kluszczyński. The race win propels Gao up to first overall, one point ahead of Thomas Goyard (FRA) after three races.

London 2012 Olympic bronze medallist Zofia Noceti Klepacka (POL) also led the single Women’s RS:X race from start to finish and moves up to second as a result. China also has a leader in the Women’s fleet in the shape of Yunxiu Lu, who is on a run of three consecutive bronze medal finishes at international events, after she finished third behind Klepacka and Bryony Shaw (GBR).

The 27-boat Finn fleet were only able to sail one race in 6-8 knots of breeze. The phrase, “snakes and ladders,” could not be more appropriate for the fleet as sailors shuffled throughout the race.

In the end, Anders Pedersen (NOR) took the race win to advance up to second overall. Tapio Nirkko (FIN) snapped up a second and holds top spot after two races.

The Finn fleet will sail three races on Thursday, starting at 10:00 local time, in a bid to catch up on races.

The Nacra 17 class was able to squeeze in two races toward the end of the day. The Brazilian team of Samuel Albrecht and Gabriela Nicolino de Sá (BRA) continued to control the fleet with a fourth and a first and now has an eight-point lead over defending regatta champions Jason Waterhouse and Lisa Darmanin (AUS) and Rio 2016 gold medalists Santiago Lange and Cecilia Carranza Saroli (ARG). Both teams have 15 points.

The Men’s and Women’s 470 were unable to get a race in today due to the light winds.

Racing continues on Thursday 31 January at 10:00 local time with another packed schedule in a bid to catch up on races lost.