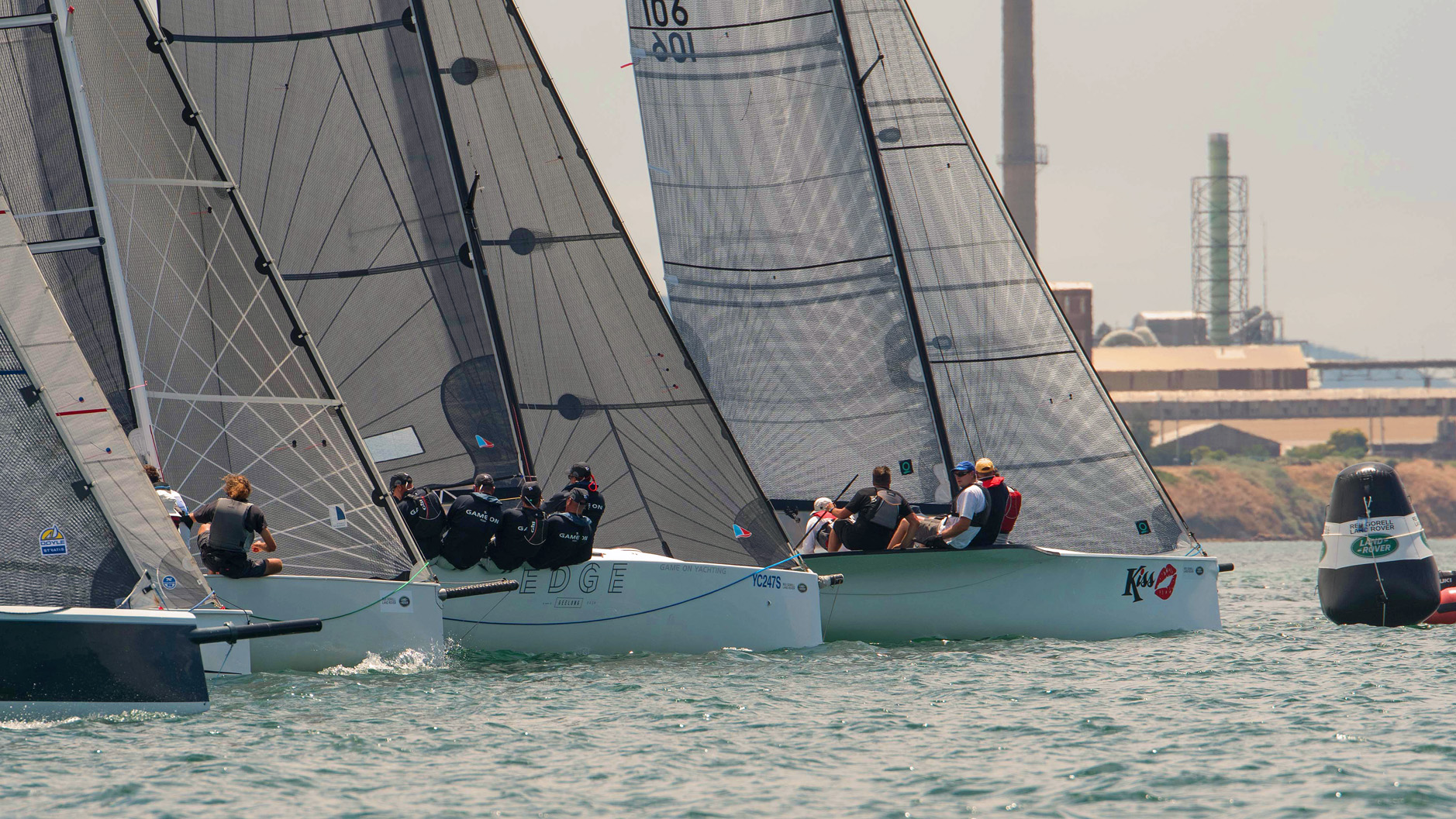 Geelong baked on day three of the Festival of Sails and the winds ground to nought then finally to a pumping 20 knots out of the sou’west for the late finish of the Rating Series’ medium distance race in outer Corio Bay.

Sailors had to have their smarts to navigate through and around the light and fickle winds that began as ENE and went through to the west to finish up SW, the precursor to a strong wind warning for Port Phillip.

The sou’wester is expected to build to 20-30 knots by Tuesday morning, January 24, the final day of the core sailing competition at the Festival of Sails presented by Rex Gorell Land Rover.

The S80s wrapped up their three day series and Paul Neilson’s Moonraker was victorious among an incredibly tight finish order, just three points between first and fifth place.

“We’re very happy with our results,” Neilson said. “It’s all crew work and luck. Our tactician was making some great calls out there but it could have been anyone’s game. We just seemed to find the right place at the right time.

“It’s unbelievable racing in the S80 fleet; I’ve been sailing one design boats for a while and this class is flat out the best. David LeRoy (race officer) did a fantastic job with his team today which made the racing as painless as possible in the tricky wind.”

The word ‘cruising’ in the Club Marine Cruising AMS divisions one two doesn’t pay homage to the quality of both fleets. John Lechte’s Cookson 12 A Cunning Plan is beating Jen and Brenton Carnell’s Sydney 38 Phoenix with a race to go.

“It was really shifty and quite tricky, but everyone is dealing with the same issues,” Lechte said after racing at the host Royal Geelong Yacht Club. “We had a wake-up call after last year’s event where we didn’t do so well so we got a professional coach and have been training hard for twelve months. We’re happy it’s paying off!”

Local favourites the Carnells were meant to be taking things easier at this Festival of Sails, without the rigours of Sydney 38 class racing. Their competitive streak is still firing and they’ve posted four seconds behind Lechte’s four first on AMS handicap.

The Gill Sports Boat division is nearing completion and Julian Newton’s Thompson 8 continues to hold out the Ratcliff family’s Viper, Heat. The light air has favoured both boats; Tuesday’s blow will take things up a notch.

“We power up in the light winds though this boat does sail well in most conditions,” Newton said. “We are defending our results from last year. We love Geelong, the flatwater is spectacular and it’s shifty though we didn’t necessarily enjoy all the shifts today.”

Peter Hickson’s M3 sailing for Western Australia is now trailing Terra Firma in Rating division 1, having knocked Secret Men’s Business back by a place. Bruce McCracken’s Ikon, a multiple division winner at the Festival of Sails, is the new division 2 pointscore leader by one point on the penultimate day of their competition.