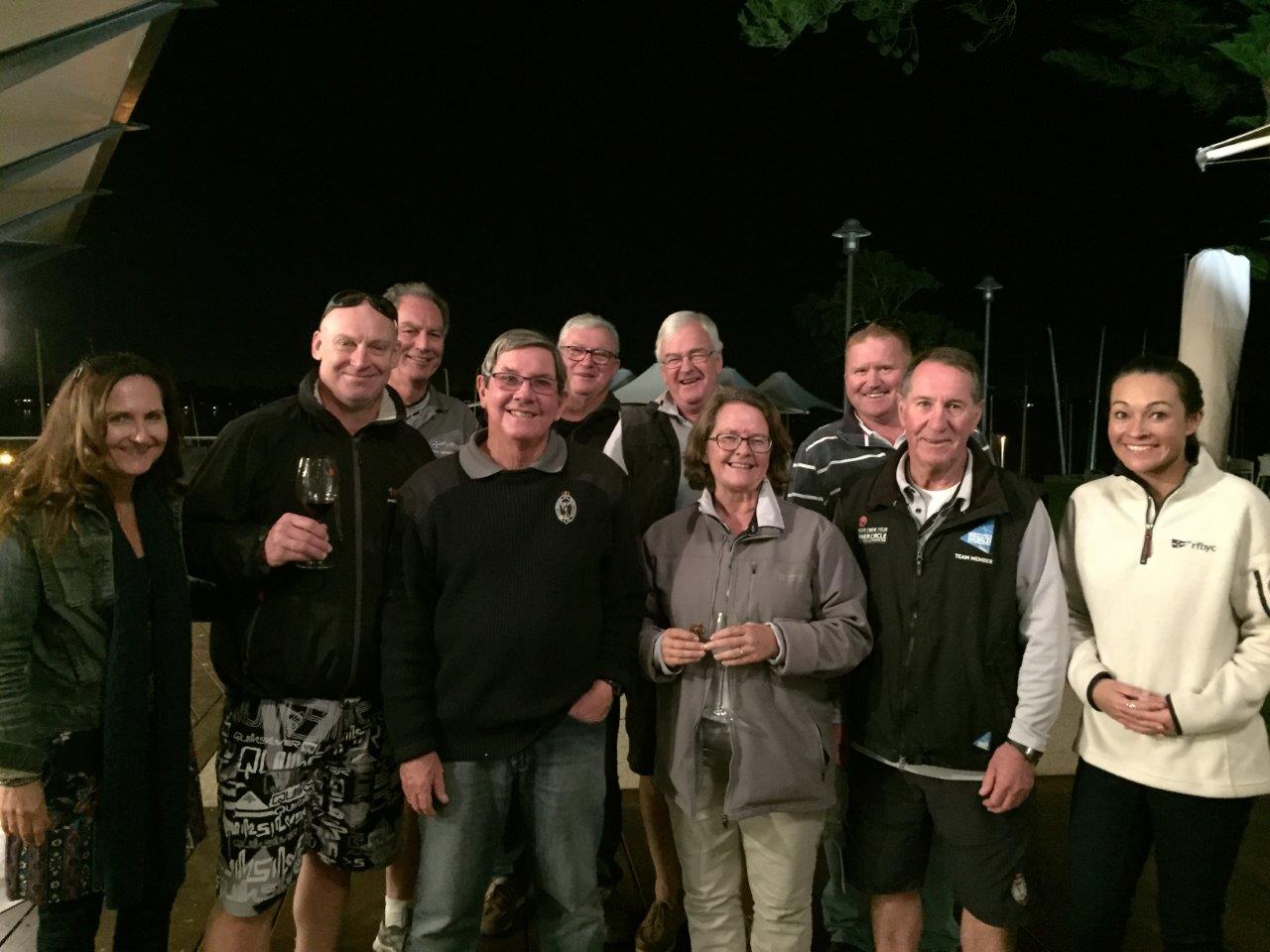 Royal Freshwater Bay Yacht Club’s first Sailing Institute Match Racing Regatta was held on Saturday 10 June in perfect conditions. The event was part of the youth winter training programme for the RFBYC Sailing Institute. Sailors from all three Winter Squads were invited to be part of the fun training event. Contested in six identical Bakewell White 8 keelboats, 35 sailors with an average age of 15 took part in the racing.

Under the watchful eyes of their coaches Lachy Gilmour (20) and Tom Blaauw (20), the sailors contested a Round Robin Series, racing each other one on one. Ashore, parents and friends gathered to watch the racing from the main clubhouse lawn which looks down over the race area in Freshwater Bay. Older sailors from the Performance Squad of experienced match racers provided excellent commentary for the crowd.

The first match saw 15 year old Lucy Alderson’s team of 3 girls and 2 boys challenge an all-boys team skippered by 13 year old Will Drew. After three laps of great racing by the young sailors the match was won by Lucy’s team. Next up, another two teams contesting their very first match race. Marcello Torre (15) on the helm took the starboard entry and Luke Dobrich (15) and team from the port end. Racing two laps in around 8 knots of wind, the match was won by Marcello. For his first match racing event, Ben Lane (15) had the hardest draw of the first flight. He was up against the experienced team of Ethan Prieto-Low (17), George Boulden (18), Nick Syme (20) and Andrew Briggs (18) with 13 year old sailor Brock Pitcher as part of the crew. What a buzz for the little guys sailing with Ben Lane who won the match!

The RFBYC Sailing Institute encourages a mentoring structure with older members and experienced sailors passing on their knowledge and supporting the younger sailors. This network was on show during the regatta day. Match Racing Squad sailors were racing while the more experienced Performance Squad sailors were coaching, umpiring and running the race commentary. Young sailors from the Youth Racing Squad assisted on the race committee boat and got a taste of the action on-board umpire boats and as part of the racing crew. The event was supported on the water by world class volunteers. Under instruction from Race Officer John Taylor, the team who ran the WMRT at RFBYC put on a professional event for the young sailors. It was an amazing experience for the sailors as well as the volunteer team who were pleased to see the enthusiastic next generation of match racers.

After the Round Robin, the top three places went through to the final stage. Third placed team skippered by Luke Dobrich raced second placed Ethan Prieto-Low’s team in one knock out match with Ethan going through to the final. Leaders on Marcello Torre’s team watched in anticipation to see who would get through to race them in a best of three series.

Ethan began with the starboard entry and after a hard fought battle won the first match. They swapped ends for match two, Marcello Torre’s young crew showing great enthusiasm and match racing skills in the pre-start and taking a win in that race. Parents from the two teams were focused on the racing as if their children were contesting the America’s Cup. Sailors who had been knocked out of the final round came ashore to have a go at race commentary and enjoy watching the contest.

In the end Ethan and crew took the final win against Marcello, Raffael Torre (13), Oliver Pabbruwe (16), Liam Pabbruwe (16) and Bruce McKinnon (15) in an excellent effort from both teams.

To finish a fun day on the river, sailors from the RFBYC Sailing Institute Performance Squad paired up to provide a match racing show. Will Boulden’s Alpha Racing Team match racing Lachy Gilmour’s Gilmour Racing Team. These teams include the coaches who are passing their skills on to the next group of young sailors who look up to their older peers.

The next day, a very excited bunch of youth sailors returned to the Club again for their training session, inspired by the fun they had the day before. The RFBYC Sailing Institute Match Racing Squad will continue through winter and finish up with a weekend regatta on Saturday 2 and Sunday 3 September.