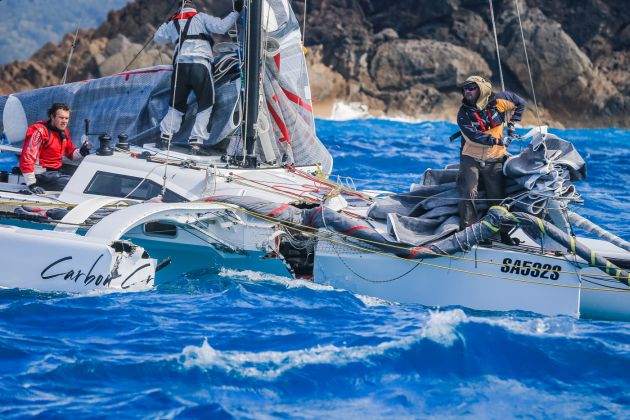 The damage to Carbon Credit in 2015. Photo Craig Greenhill/Saltwater Images.

A collision that led to Peter Hawker’s sudden departure from Audi Hamilton Island Race Week 2015 was nothing less than a “bloody disappointing finish” and the second year running the South Australian yachtsman was forced out of the annual Whitsunday regatta with damage.

This coming August the tenacious multihull owner is going to try and break his Race Week hoodoo. Hawker’s third crack with his lightweight Farrier F32srcx called Carbon Credit coincides with Yachting Australia’s inaugural Australian Yachting Championship title for racing multihulls, so there could be both a result and a national title if things pan out this time.

A day four pre-start bingle with the nine tonne Young 57 called Earthling in robust offshore conditions last series forced Hawker and his crew to pack up early for the 2,500km drive home to begin repairs.

The damage was regatta-ending but mitigated by the point of contact as it was forward of the beam and folding mechanism. “A couple of feet aft and there would have been a major rebuild,” Hawker admitted.

He was fortunate to have the services of a great shipwright, Tom Crabb in South Australia, and in three months Carbon Credit looked unblemished. Having a matched pair of F32 SRCXs in South Australia (the owners had them built together in Tauranga NZ) enabled Crabb to take inner templates of the areas of missing structure from the second yacht, Crosshair, another 2016 Race Week multihull championship entry.

While the tri was on the blocks Hawker ordered some enhancements. “I took the opportunity to have designed and constructed by an engineer who sails regularly with us a system to enable us to adjust the aggression of the foils so the lift/drag balance may be altered to suit both the sea state, wind and sail wardrobe.”

It was always Hawker’s intention to return to Hamilton Island for the August 20-27 regatta and he regards the YA endorsed multihull national series a significant embellishment. “Hopefully this will boost the number of competitors. There are still significant communities within the sailing fraternity who see multihull sailing as outside the traditional norms; multihulls are just variations of the spectrum of sailing craft,” is Hawker’s view.

Carbon Credit is primarily a regatta boat and Hamilton Island’s major winter event is where Hawker can compete against the best in Australia. “We have a well organised and run multihull association in South Australia but few active racing yachts so we travel for the competition. My experience at Hamilton Island so far is that the course selection has been very carefully and sensibly planned in light of the tide and prevailing wind and sea state.”

Hamilton Island reintroduced multihulls to the racing program in 2013 and it’s proven the growth area for entries.

“It is an honour for us; a fitting tribute to what is the 33rd staging of Audi Hamilton Island Race Week, that Yachting Australia will stage the Australian Multihull Championship at the regatta,” said Hamilton Island’s CEO, Olympic and world championship winning sailor Glenn Bourke. “The event will sit well alongside the three major keelboat Australian championships that will also be decided.”