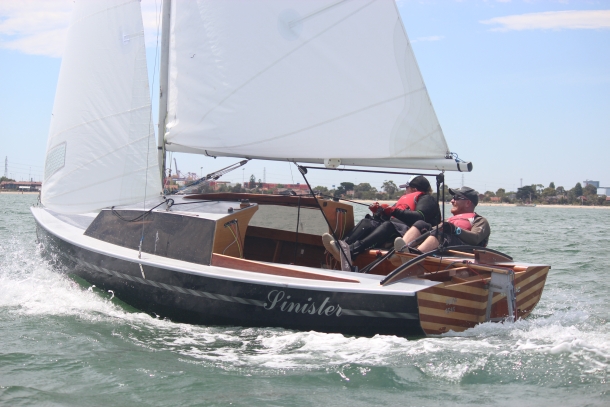 The 50th anniversary of TS16 Australian Championship was hosted by Williamstown S.C. on Port Phillip Bay from Dec 28th to Jan 5th and saw the attendance of 16 enthusiastic crews from SA, Vic and NSW. Unfortunately winds experienced early in the regatta exceeded the prescribed safety limit resulting in three out of the first four heats being abandoned pending resail. Essentially the bulk of the regatta was compressed into the three days remaining after the New Year’s Day lay-day with several resails occurring in the mornings. This allowed for five scores to be counted with the worst score of six to be dropped.

A notable entrant this year was Ultimately Sinister, a state-of-the-art epoxy built boat which is the end product of several decades of refinement by class legend Neil Bilsborough. Neil recruited a pair of distinguished sailors from Sydney to pilot Ultimately and challenge the current national champion, Sinister, which is also one of Neil’s earlier creations. Olympic Sails principal, Gary Gietz was co-opted to skipper Ultimately. Gary is also a 470 and J24 class legend. While standing in as forward hand was six time Australian TS16 champion skipper Craig Jelfs.

Race #1   (Forecast: 12kts SE)
Race started cleanly in 5kts from the SE. Local boat Whispering skippered by former Pacer class national champion Allan O’Brien and crewed by Sue Burke was an early leader as she headed left out of the start toward Port Melbourne dock with Ultimately in close contact. Sinister bailed out after an average start and headed right for clear air. The breeze remained fairly steady but more pressure gradually built from the right side of the beat. Ex-Victorian Fireball sailor Peter Mullinger made the most of this exploiting lines of pressure and sailed  the newly renovated Wild One (crewed by David Taaffe) to take over the lead.

Ultimately gradually ran out of wind on the left. Sinister played the middle and rounded the windward can first followed by Wild One, SA entrant Merlot and NSW veterans Eric Partland and Gary Wills in Uncle Roy.

Positions remained fairly stable until on the second windward leg when the pressure built to 5-8 knots, conditions in which Uncle Roy excelled. Roy made steady gains downwind, and stayed in pressure upwind, which continued to favour the right side of the beat near the shipping channel. Meanwhile Ultimately quietly worked her way out of mid fleet and began to tussle with Sinister who by now had relinquished the lead to Uncle Roy.
Roy covered well up the final beat and scored a comprehensive victory by one and a half minutes. Ultimately won the tacking duel with Sinister and took second. Wild One surprised many with an excellent fourth.

Race #2    (10am attempted resail)
This race was abandoned after the first lap after several large wind shifts saw the breeze move from North to SE, a change that was not forecast and caught competitors and race management by surprise. This left the crew on Ultimately to rue a lost opportunity as they held a significant lead at the time heading into what should have been the windward/return.

Race #2  reprise  (2pm NW fading from 15kts)
The 15kts prevailing before the race did not sustain as the fleet got away with a clean start in a fading breeze. The course was picturesque with the windward mark laid under the skyline of the Melbourne CBD. Boats spread up the first beat all trying to gain purchase on shifts from both sides. Whispering and Ultimately got in phase early and looked strong.

By the top mark Ultimately held a skinny advantage over Whispering and Sinister. Whispering spotted the wing mark first beyond Port Melbourne pier and sailed over the other two leaders who were below the rhumb. By the gybe Ultimately had the lead again and the front runners had been joined by Uncle Roy and Saratoga combination Brett Sims (former Spiral national champion) and Kelly Buchanan in the famous Charlie Brown.

By the start of the final beat Ultimately had extended and led comfortably. They were so far ahead they found it difficult to cover in the patchy breeze. Sinister split and took a punt on the right while Ultimately continued to do well on the reliable left. When Sinister jagged that lucky shift that we all dream about from the right, they were able to fully utilise the leverage they had gained through separation. Ultimately limped across in an attempt to maintain the lead but they couldn’t make it. Sinister made the cross and took the win by 26 seconds.

Race #3   (10am Southerly 15kts fading to 8kts)
Following another clean start Ultimately and Sinister kept close company sailing left off the line toward the docked Diamond Princess cruise ship. Meanwhile the canny locals took the opportunity to school the northern raiders by tacking off from the boat end of the line and bolting for the rocky finger wharves on the right. By the top mark local boat Hissing Sid (Peter Behrendt and Peter Yeates) was staging an impressive coup and led around from fellow locals Whispering.

Eventually the Sinisters wore the leaders down and Ultimately took the win from Sinister with Uncle Roy third.

Race #4  (2pm 12kts southerly)
In the afternoon race the interstate visitors showed they had learnt the lesson from the morning and headed right with the locals out of the start. Hissing Sid maintained their form from the morning race to round the top mark right on the heels of the two black boats and showed good pace downwind.

Rounding the leeward mark for the final time Sinister got a little too cute and kissed the buoy. Following the ensuing 360o penalty turn they found themselves in hot water with Ultimately imposing themselves in a dominant position to windward. However, the heavier crew weight of Sinister was put to good use on the rail and enabled them to dig their way out of trouble and take the win. Hissing Sid maintained their respectable third place across the line.

Race #5   (10am 5kts southerly)
At the start of the final day of racing the series lead was tied and it was certain that whichever of the two almost identical black boats, Sinister or Ultimately Sinister, prevailed today would take the series.

As the clock ticked down to the start the top boats all appeared to be edging toward the pin and the apparently favoured left side of the first beat. However as the start gun fired the wind faded slightly and things did not look so certain. Sinister got a ghostly lift out of the middle of the line and began to climb over Ultimately and Uncle Roy who now weren’t looking so hot out to the left.

It took the series leaders a while to notice however what was happening elsewhere in the fleet as a further shift and pressure band moved across from the right. Drummoyne boat Vinca (Trevor Bell and Neil Johnson) as well as Wild One were dining out on their good fortune as they screwed up into the starboard tack lifts and brained the “hot shots” who continued to wallow on the left waiting for a shift back to the middle.

Vinca and Wild One maintained their lead around the first triangle. However, up the second beat Sinister and Uncle Roy committed fully to the right and got around the two early leaders. As promised in the pre-race briefing the course was then shortened at the top mark. The finisher’s horn sounded seeing Sinister getting a win in their least favoured conditions with Uncle Roy second followed by Wild One and Vinca. Ultimately (6th) was unable to stage a comeback as the race was truncated. This race would be their drop.

After the race everyone was doing frantic calculations as the committee made ready to hold the final race back-to-back. It appeared that after dropping a third the Sinister crew had secured the title having only to carry firsts and seconds. However, a red flag was spotted flying from Ultimately and rumours spread through the fleet involving words such as “protest” and “redress” that kept the tension in the air and a feeling that this was not yet over.

Race 6#   (12kts southerly)
As the fleet waited for a new start line to be set the wind and seas continued to build. Eventually, the final race got away in a moderate breeze with a horrendous one meter high, short, sharp, chop. Around the course a handkerchief could have been thrown over the two Sinister boats as they fought for the lead. However, SA entrant Merlot (Andrew Doyle and Hugh Longbottom) began to find the conditions to their liking too as they joined the fray.

Every wave counted on the sixty degree runs as Sinister attempted to defend the narrowest of leads from her faster downwind rivals. Approaching the wing mark for the final time it appeared that Merlot might obtain an overlap. However, giving them buoy room would almost certainly cause Sinister to let Ultimately get through as well. With only boat lengths until the zone the sudden launching of the besieged Sinister’s whisker pole enabled them to shoot a large roller and come down across the bow of Merlot to close the gate on buoy room at the last minute.

On the final reach Ultimately unleashed her full potential and planed through to leeward of the two leaders and began the final beat to the finish in the lead. Up the work Gietzy showed great tactical control as he shielded the favoured right hand side from his rivals. Sailing a little lower and faster also helped Ultimately overcome the nasty chop and they held off Sinister who was forced to duck them on the finish line and settle for second.

Merlot crossed in third, seven seconds later. Fourth was Charlie Brown who had saved their best race for last revelling in the challenging conditions.
What a race!

But was it all over?
As it turns out a protest was indeed lodged against the race committee by Ultimately Sinister upon returning to shore. However, the matter was dismissed and the results stood. Sinister had defended the title.

In the end there was only one point separating Sinister from Ultimately Sinister. Nothing in it. However the performance of the two boats was quite different. Sinister had excellent height and speed upwind and her crew was heard to exclaim on more than one occasion, “Thank God we finish upwind!” However, while sailed with skill and guile upwind, and with great tactical savvy, Ultimately Sinister made a lot of gains downwind. What caused these differences will no doubt remain the topic of some conjecture.

The 51st TS16 Championship will be hosted by Largs Bay S.C. in South Australia.