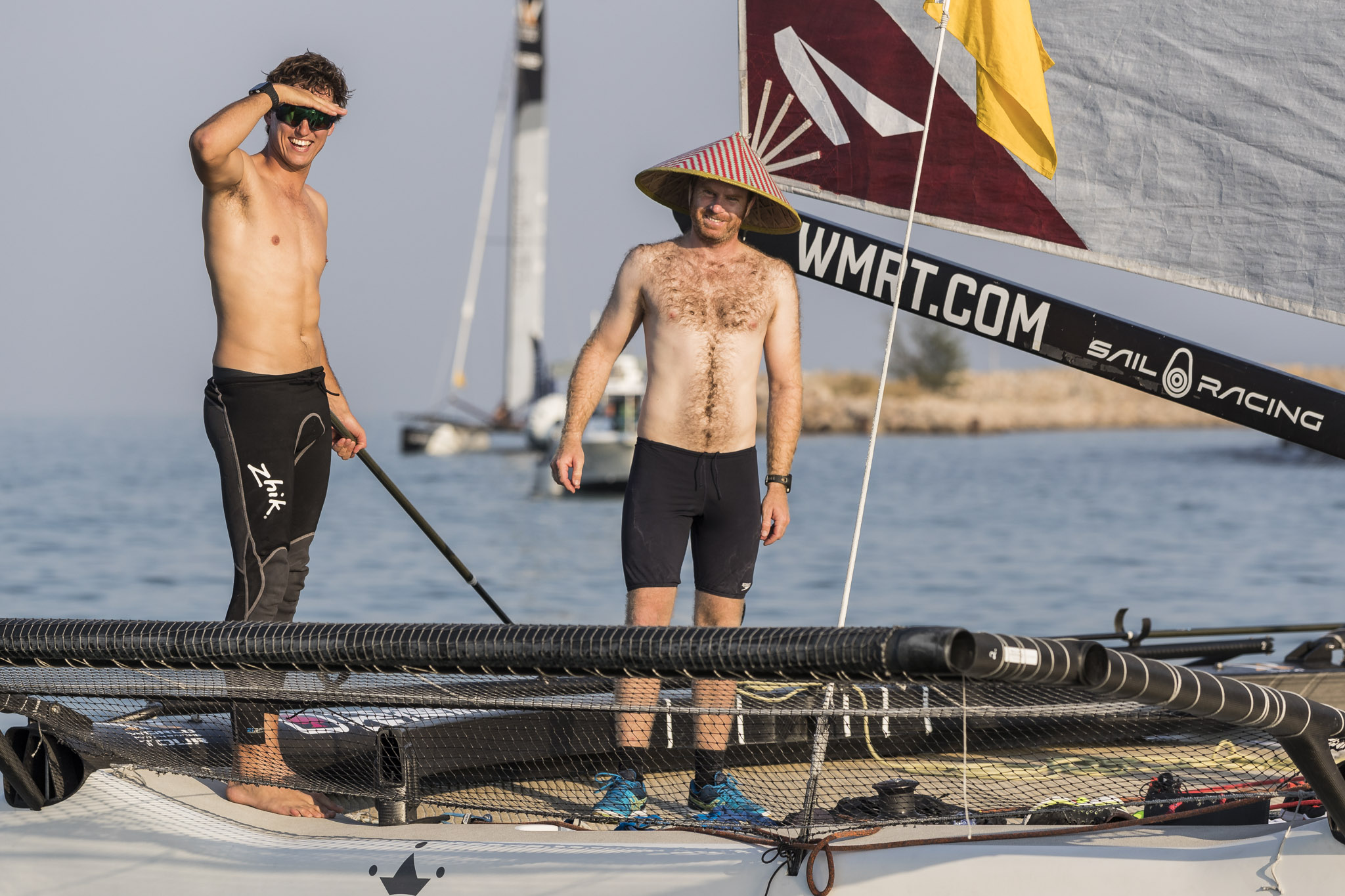 Shenzhen, China: Harry Price might have broken through to the Quarter Finals after winning two crucial battles today in Match Cup China 2017, the young Australian was up against Markus Edegran from the USA, but Price was penalised for a technical infringement.

The International Jury ended up docking Price 0.5 points from each of his two victories. So this puts Price just 1-0 up against Edegran, leaving more work to be done in this Super 16 match. Price remained upbeat despite the setback after a long and gruelling day on the water in Shenzhen, China.

The sun was beating down hard, but the wind was only ever soft, barely flickering over 4 knots.

“Overall a good day for us, two wins, and it looked like it might be a third one before it got called off. But as the scoreboard shows, we got a bit ahead of ourselves and put something on the boat we weren't allowed to. We got pinged, that's fine, that's part of the rules and we're happy to accept that.”

In the battle of the 49er sailors, David Gilmour (AUS) dispatched 2008 Olympic champion Jonas Warrer (DEN) 2-0 in their Super 16 battle.

“It was a good day, long day of light wind sailing and we managed to get the best of our first two races. It was unfortunate we couldn't finish the best-of-five series but still happy to get to the next round,” Gilmour said.

The Western Australian has learned the subtleties of racing the M32 in light winds better than most: “The way you sail these boats changes a lot from just trying to fly the hull to committing to two hulls in, and sailing with the gennaker out upwind,” he said.

“Every couple of knots, you go from six to five to four knots, and it changes radically how you sail the boat, from having everyone working on the manoeuvres to having people going forwards to get the bows in and just having two people doing all the manoeuvres, which is how we ended up the day.”

Next up for Gilmour will be a Quarter Final match against fellow Western Australian Torvar Mirsky.

While Chris Steele’s match against Joachim Aschenbrenner should have been straightforward, it was anything but that. The New Zealander just couldn’t get his timing right for the start. “It was a very tricky day, light and fickle conditions. Full credit to Joachim and his team who got a number on us on the starts, 2-1 to him there. But Garth [Ellingham] picked some nice shifts and the boys dug us out of some big holes after the start.”

Despite the scares on the start line, Steele came through 2-1 against the young Dane. It’s a different story in the Quarter Finals against six-time World Champion Ian Williams who will be no pushover in the start or on the open race course.

“We’ve obviously got to be stronger against Ian Williams who's going to be very tough in the pre-start,” said Steele. “There’s a lot to work on but we’re feeling confident as well,” Steel said.

With the wind refusing to co-operate, the event is behind schedule and the Super 16 match between Taylor Canfield and Mans Holmberg is yet to begin.

As former world champion and Tour commentator Simon Shaw commented: “There’s only two days to go and we’re not even into the Quarter Finals, so the sailors are going to have to master some imperfect circumstances and be ready to win it quick.”

The tension in Shenzhen is ratcheting up to a new level and it will be fascinating to see who rises to the occasion. The remaining Super 16 and then Quarter Final stage matches will begin tomorrow at 10:00 local time in conditions forecast with more wind.