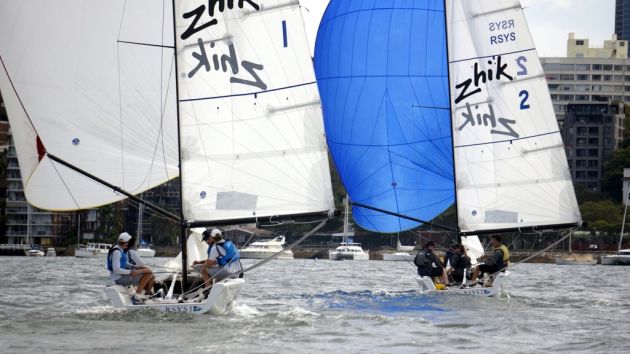 Will Dargaville and his crew from the RPAYC lead Will Boulden from the RFBYC in the final of the Hardy Cup. Photo Raoul de Ferranti.

A team from Sydney’s Royal Prince Alfred Yacht Club has won the prestigious Hardy Cup Under 25 Grade 3 International Match Racing Regatta for the first time since the inception of the event in 2001. Will Dargaville and his crew of Liam Bennett, Evelyn Foster, Ruby Sholten and James Farquharson won a hard-fought final against Will Boulden from Perth’s Royal Freshwater Bay Yacht Club.

“Ecstatic and exhausted,” 21-year-old Dargaville said after coming from behind to beat Boulden 3-1 in a day of tricky 6-10 knot easterly breezes on Sydney Harbour.

Sailors from the Cruising Yacht Club of Australia have won the Hardy Cup three times while the other two winners have been Royal Freshwater Bay Yacht Club and the Royal Yachting Association in Britain.

Once again the Hardy Cup 2016 attracted an international fleet and on the last day of competition saw teams from Australia, New Zealand and New Caledonia fight out the finals.

Dargaville, like most of his competitors and their crews, is a graduate of the RPAYC club’s youth development programmes. He alternates sailing Lasers to helming and crewing on Elliot 7 sports boats at the ‘ALfreds’, where the coaches are Tom Spithill and Jordan Reece.

The RPAYC team finished narrowly at the top of the leader board after four closely fought round-robins between the six teams which saw Dargaville, George Anyon (RNZYS), Will Boulden and Cyril Fortin from the Cercle Nautique Caledonien in Noumea, New Caledonia reach the finals.

Dargaville chose to race Fortin in his semi-final, winning three straight races against the team from French New Caledonia. Boulden had a hard duel with Anyon, finally winning 3-1.

Riding a wave of success from their semi-final, the RFBYC team, comprising Boulden, Douglas Campbell, Damian Garbowski and Megat Asian, won the first match of the final against Dargarville.

“They really flogged us in the first race, probably the biggest winning margin of the regatta,” Dargaville said. “He picked the wind shifts correctly in that race, a difficult one in just 6 knots on a course in the lee of the island in Rushcutter Bay. But we fought back and won the next three races to take out the Hardy Cup… I believe the first win by team from the Alfreds. Racing was extremely close, boat-for-boat racing… in the final match we each had a penalty within 10 seconds at the leeward mark.”

Dargaville and a number of RPAYC members are heading to New Zealand shortly to contest youth match racing events at Wellington and Auckland,

In the petit final, George Anyon defeated Cyril Fortin 2-0. The New Caledonian crew sailed an impressive series in their first Hardy Cup regatta and should be encouraged to contest further international events.