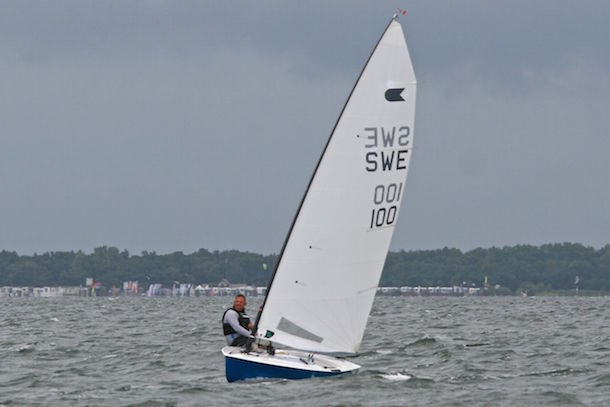 After a particularly horrible day in Puck, Poland, Andre Budzien (GER) has retaken the lead at the OK Dinghy World Championships, though Thomas Hansson-Mild (SWE) dominated both races for two big wins in the big wind and huge rainfall. Jim Hunt (GBR) drops to second and Charlie Cumbley (GBR) moves up to third, despite breaking his centreboard and not finishing race 7.

Just when they thought the weather couldn't get any worse, Puck threw a new version of horrid at the 94 OK Dinghy sailors. The light rain over breakfast turned to moderate rain as they arrived at the club to heavy rain for most of the rest of the day. There were a few breaks in the incessant downpour, but only to build up pressure for the next outpouring from the sky. It was cold, bleak and distinctly unpleasant, but the racing was first class with a relatively stable breeze – and by relatively we mean just 20-30 degree shifts – at 16-25 knots.

It took three goes to get race six away under black flag. It was a clean start with Bo Petersen (DEN) and Stefan Myralf (DEN) flying out of the committee boat end of the line to lead the fleet to the left before rounding the first mark ahead of Pawel Pawlakzyk (POL). Cumbley took the lead on the second upwind, but on the final leg, Hansson-Mild, who had moved into the top five on the downwind, favoured the left while the others favoured the right. He found a nice shift back to cross ahead and win the race from Cumbley and Myralf.

Race seven also started under black flag, with one boat pulled out, the class President Bo Teglers (DEN). Myralf was sailing well again (wearing an offshore jacket for full protection from the elements) to lead round the top mark from Greg Wilcox (NZL) and Hunt. However, Hansson-Mild, one of the fastest sailors in the fleet offwind in these conditions, took the lead on the downwind and extended away for a huge win, hooking every shift perfectly. He took his second win of the day from Budzien and Rene Johannsen (DEN).

Hansson-Mild described his day. “Today was a good day. It was the windiest day so far with a little more stable conditions. In the first race I started towards the pin and tried to work myself up the beat together with the rest of the fleet. It seemed the right was paying but we all came up in a pretty tight bunch. After two good reaches I was in about 10-15 and on the second beat I just played the shifts. On the run I gained on the top three and got in the top five at the gate. I went towards the left side and found some good pressure with a nice lefty which brought me up to the finish”.

“In the second race I started off much better and got a good rhythm in the shifts to find myself top five at the mark and dived low on the reach since it was so deep and almost a run to the wing mark. I got the inside just before Myralf who showed good speed today and managed to get some distance and could stretch from there on the following beat, run and basically covered from there to win.”

Going into the event as one of the favourites, he reflected on the week. “It's too bad that I had such a slow start at the worlds but with two races to go anything can still happen. But I am of course realistic about the fact that Andre, Jim, Charlie and Bo are all consistent. My starts have been generally bad and I figured out that, since I've not sailed any championships nor big regattas since the Europeans in 2013 I have missed about 50 starts or more and it's quite telling.”

His two race wins have set up a fascinating battle for the top spots in Saturday's two final races. While the smart money would be on the 2012 World Champion, Budzien, and the 2004 World Champion, Hunt, to slug it out, there are some high scores lurking, with only Budzien having a clean sheet to show. Cumbley's inadvertent capsize and centreboard damage opened the points gap to Hunt to 12 points. However Petersen, and Pawlaczyk are both within striking range if the opportunity presents itself, so it should be an exciting conclusion to a tough week on the water.

The final two races are scheduled for Saturday from 11.00.