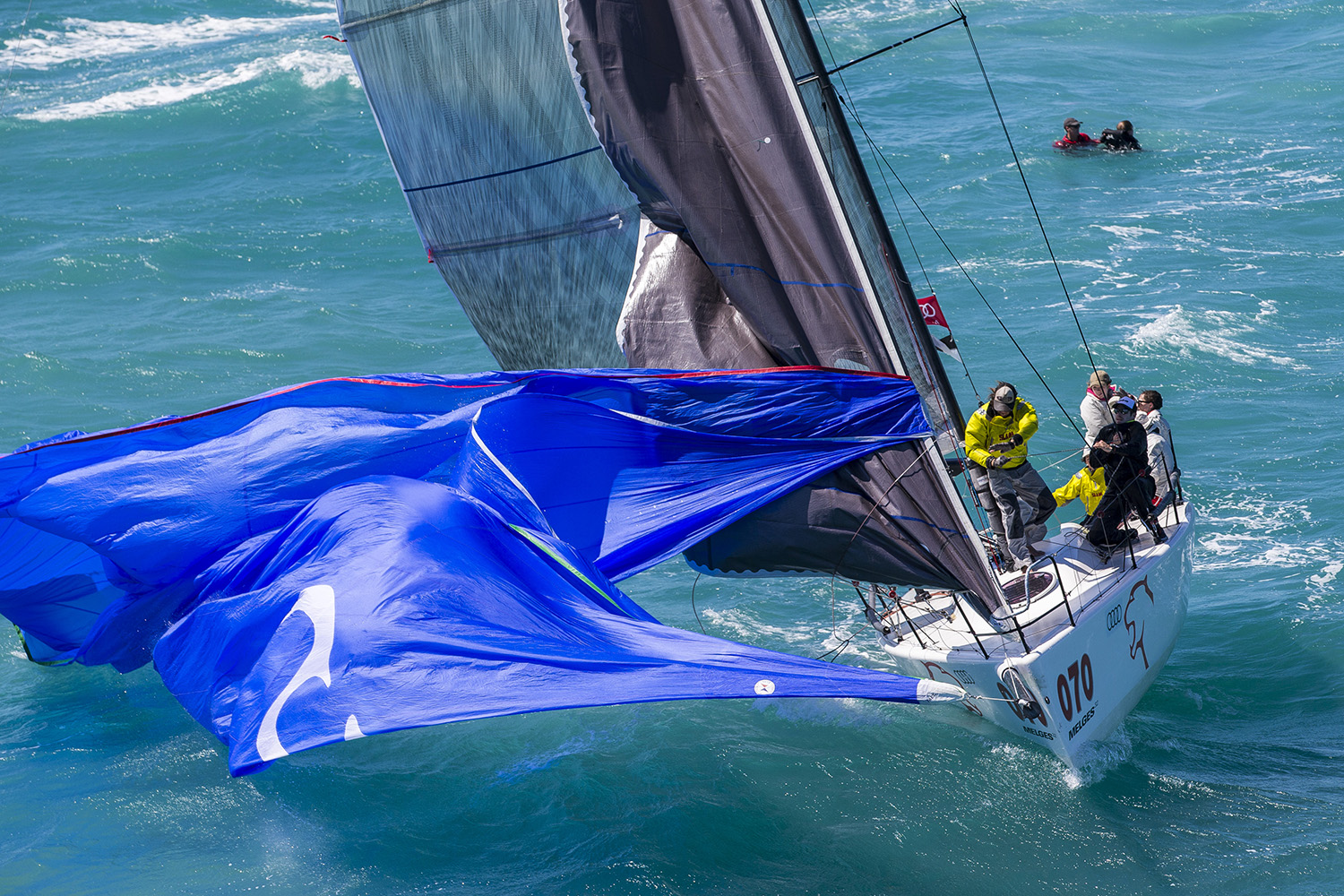 Racing began on day one of Audi Hamilton Island Race Week 2017 in idyllic conditions, excited and some nervous crews facing the prospect of a 25-30 knot sou’easters and strong tide making for a wild downwind run from the narrow start in Dent Passage.

The fleet handled the fresh conditions over the 24 nautical mile course, 19 miles for the non-spinnaker, trailable and some cruising divisions, just the odd incident including a man overboard and recovery on the Melges 32 Panther that had been screaming along until the owner was flicked over the side when the boat lost control.

Wild Oats X has been renamed NANOQ for the Whitsunday series by the Crown Prince, a keen and competitive international sailor who scored important opening points on corrected time sharing the helm with America’s Cup regatta director Iain Murray.

Second over the line in IRC Racing division was Peter Harburg’s 100-foot Black Jack representing Queensland in its second-only event following a July launch. Navigator Tom Addis said: “Today was our second start and first actual rounding of any mark in anger. Our start was good; we wanted to be close the Oats guys to learn more but they got away from us. Our goal is to spend the week next to Wild Oats and learn how to be competitive.”

In the Racer/Cruiser class the owner of the Melges 32 Panther, Steve O’Rourke, accidentally fell overboard when the boat broached in a nasty gust. His son-in-law Burke Weila immediately dived in to be alongside O’Rourke and both were retrieved from the warm water a short while later.

“We had a standard broach and I got flicked out…Burke saw me go and dived in first,” said O’Rourke. “We’d been through a man-overboard practice together and the boys did a great job handling the boat. They came back and picked us up on the second pass.”

Racing in the Trailable division on the shorter islands course, the crew on Tatui enjoyed a close encounter with a Humpback mother and calf who wandered onto the race track.

In welcoming the fleet to Race Week 2017 at Saturday night’s Club Marine owner’s and skipper’s cocktail party, Hamilton Island CEO Glenn Bourke revealed the extraordinary challenges his team faced getting the island ready for the annual regatta after the devastation wrought by Cyclone Debbie in March.

Bourke and the Oatley family’s goal was to the have the island ready for Race Week and both Club Marine CEO Simon McLean and Audi Australia’s new CEO Paul Sansom shared their amazement and thanks to the resort for the obvious effort that has gone into the recovery.

With the speeches delivered it was time to kick off Race Week with the traditional colourful and noisy fireworks filling the skies above Hamilton Island’s harbour where crews representing 215 cruising boats, trailables, multihulls, classics and Grand Prix racers are sailing for every Australian state, the ACT and the USA.