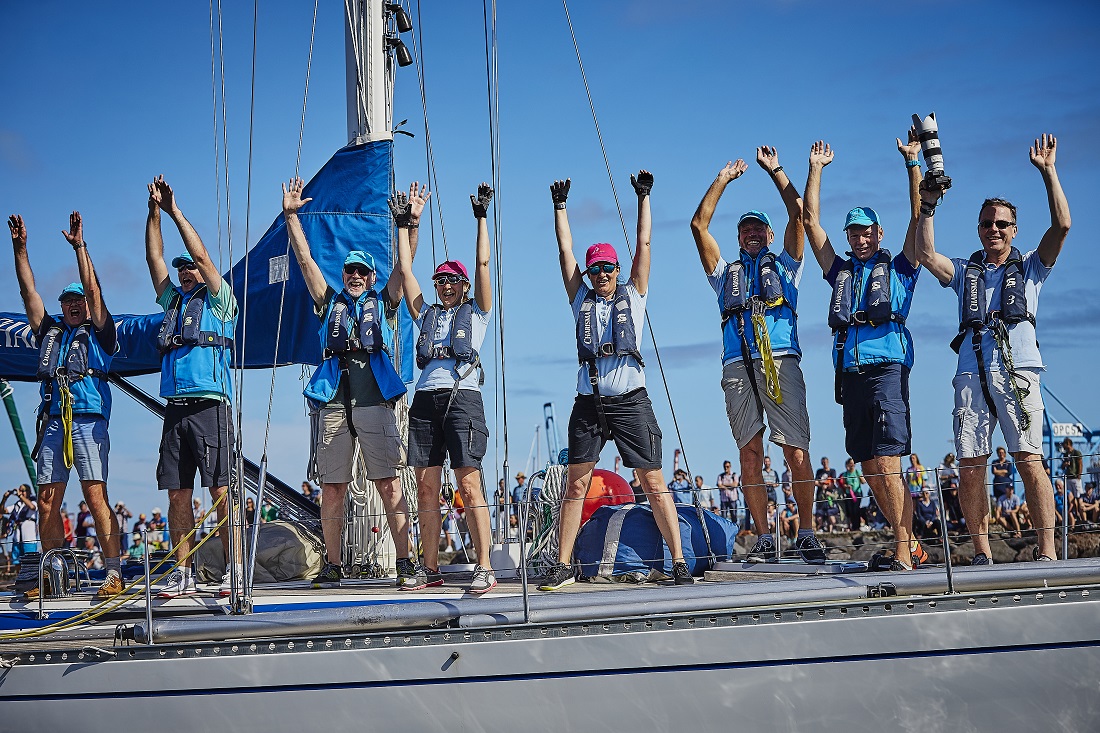 Crew of Charisma give the Mexican wave - James Mitchell pic

At 00:52:47 on Friday, Rodney Bay welcomed the first arrival of ARC 2019; French flagged Hallucine, led by experienced ocean sailor Régis Guillemot, had a great blast across the Atlantic, clocking up a record day of 385nm at an average speed of 15.2 knots and sailing under main and asymmetric the whole way.

The winning formula for the 50ft multihull Marsaudon TS5 design was a combination of strategy, filet mignon and a competitive crew, aiming to beat one another's helm speeds as they zoomed across the ocean.

Guillemot’s crew, his wife Veronique Le Gall, Yves Pellisson and Pierre Louis Delarue, were jubilant to reach Saint Lucia in an elapsed time of 11 days, 16 hours, 52 minutes and 47 seconds. They sailed tactically south to pick up the trades.

“It has been a truly great sail. At the start, the wind was not too strong, but the boat performed amazingly and we had no breakages or failures for the whole trip. Our tactic was to head very south, passing the Cape Verde islands close enough to see the crabs on shore.

“Once we found the trades, we really took off. These winds carried us all the way to the finish line. We trimmed the sails, but no changes to the set up for over 3000 miles. We’ve had a great battle with fellow multihull, Allegra, which sadly retired at the last moment. But to beat the racing boats is a really proud achievement for us,” Guillemot said.

Hallucine was built in Lorient at by the Marsaudon yard and Régis completed an Atlantic circuit with her in 2018.

“We know it is a fast cruising boat, but not built as a racer. The four crew have been perfect to handle her to be as fast as she could be,” Guillemot explained.

This year, they joined the ARC for the first time, “For the fun, the competition and the camaraderie – we have not been disappointed and the organisation has been superb.”

Following some time to sleep and time to tidy the boat, the crew was officially welcomed to Saint Lucia by Beverly Nicholson-Doty CEO of the Saint Lucia Tourism Authority, Depa Gidharry Senior Tourism Officer from the Ministry of Tourism, IGY Marina Manager Sean Deveaux, and representatives from the Events Company of Saint Lucia.

With the steel pan soundtrack and obligatory rum punch it was a special moment as 2019 marks the 30th year of the ARC arriving to Rodney Bay and remarks of welcome from supporters of the ARC were made to a crowd of gathered media.

The French crew has lived on the neighbouring island of Martinique, so arriving to see the familiar silhouette of Pigeon Island was a welcome sight.

“We are from the islands so it is wonderful to arrive somewhere we feel like home. We are delighted to be here in Saint Lucia and are looking forward to enjoy the time on shore here” Guillemot commented.

Despite the dual with Allegra, which retired, the next ARC arrival was Sisi, a Volvo 65, part of the Austrian Ocean Racing Project. The first monohull and leaders of the ARC Racing fleet crossed the line less than 10 hours behind Hallucine, whose crew was eager to welcome Sisi’s and compare notes from their very different ocean crossing experiences.

Following the first arrivals of the ARC fleet, roughly a third of the yachts from ARC+ are left to arrive, where their shoreside program continues.

Crews have enjoyed seeing one another again, reuniting after their Cape Verde stopover, evident from the buzz at last night's beach BBQ at Spinnakers Beach Bar and Grill. Almost 200 sailors have now reached Rodney Bay and are now chilling out and enjoying a little Caribbean sunshine, interspersed with the occasional warm tropical rain squall.

Right up until the final ARC prizegiving on 21st December, there is a full program of fun activities for the ocean-crossers to enjoy around Rodney Bay.