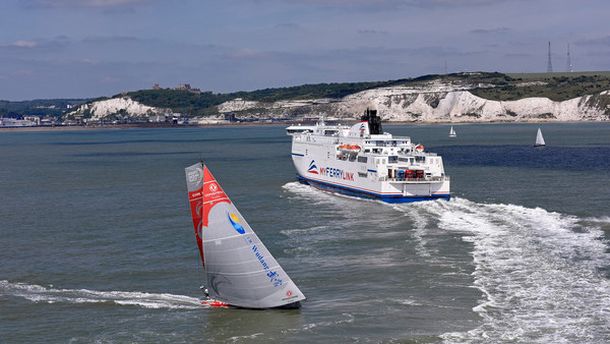 THE HAGUE, Netherlands, June 19 – Team Alvimedica (Charlie Enright/USA) made a triumphant entry into The Hague at 0134 local time/2334 UTC this morning and put themselves in pole position to win Leg 9 of the Volvo Ocean Race.

The Turkish/American team still have 480 nautical miles (nm) of the final leg of the nine-month offshore marathon to negotiate to Gothenburg, Sweden, having sailed two days, eight hours and 34 minutes since leaving Lorient, France, on Tuesday. That gave them a 26nm advantage over the second-placed boat, Dongfeng Race Team (Charles Caudrelier/FRA), which was still to finish at 0230 local time (0030 UTC).

“It always feels good going into the locker room at halftime ahead, but that’s all it really is. It’s kind of like Cape Horn, no points but still a great accomplishment,” said Charlie Enright, shortly after crossing the line.

Enright, 30, the youngest skipper by far in the race, also led his team to the Cape Horn landmark ahead on Leg 5, but relinquished that lead and eventually finished third.

If Team Alvimedica can complete the job and win in Gothenburg, they would be the sixth of seven boats in the fleet to have won a leg in this 12th edition.

“It sounds like there’s a fight (behind us). It’s nice to be watching it and over the line,” he added.

Enright talked through the ‘decision of the leg’ – whether to hug the English coastline or stick, as he did, to the French and Dutch shorelines to the south of the English Channel.

Initially, on Thursday, it looked as if north would pay, as Dongfeng Race Team, MAPFRE (Iker Martínez/ESP) and Team Brunel (Bouwe Bekking/NED) seemed to be making gains in stronger winds midway through the day. But Team Alvimedica stuck to their guns and eventually the tides and breezes turned to their advantage for an entrance into The Hague, and across the finish line, chased by dozens of spectator boats.

They will head out of The Hague at 1200 local time (1000 UTC) on Saturday with their one-hour plus advantage over Dongfeng Race Team and the rest of the fleet taking their advantages and deficits over their rivals too, in a staggered start.

The seven boats are due to finish the leg in Gothenburg on Monday afternoon according to the latest estimates.

If Team Alvimedica were to be first into port there too, they would need Team Vestas Wind (Chris Nicholson/AUS) and Team SCA (Sam Davies/GBR) and to improve on their current sixth and seven places and sandwich themselves between Enright’s crew, Dongfeng Race Team and MAPFRE, to take an overall podium place.

Meanwhile, Abu Dhabi Ocean Racing (Ian Walker/GBR) sailed serenely on in fifth place, having avoided any major problems on the first half of Leg 9. They have an assailable eight-point advantage over Team Brunel at the top of the overall standings.