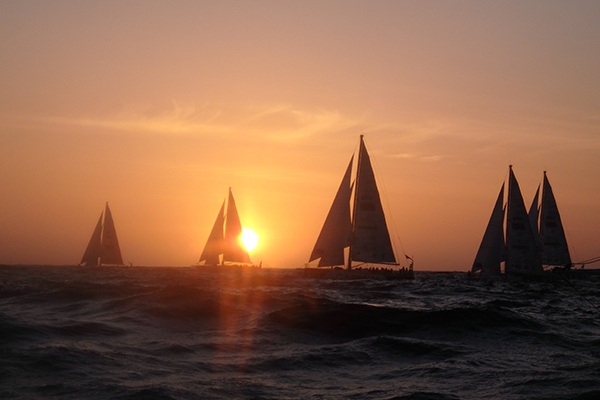 Day 3 of Race 10 and the PSP Logistics Panama Cup has seen a continuation of great downwind racing although conditions are starting to become lighter this morning (UTC) produced by an approaching weak front.

The fleet has made good progress over the last 24 hours with the front-runners reducing their distance to finish by more than 200nm.

“And the yacht ballet continues, one gybe we all gybe,” reported Da Nang-Viet Nam skipper Wendy Tuck. “It has been a lovely day’s sailing, blue skies and sunshine; the seas have settled down and it feels like it is getting warmer.”

The majority of the fleet has been on starboard tack for the past 8 hours heading offshore, but will be looking to gybe back in soon. The dilemma is where to find the best wind.

The automatic leaderboard on the Race Viewer may be a little misleading as the fleet rounds a waypoint on a bend in the race track, with those boats closer to it showing a better position than those still heading away from it offshore.

Garmin recently gybed back onto port tack, so although it is not as far south as Derry~Londonderry~Doire, leading the rest of the pack, it has the least distance to finish being closer to the way point on the race track. As at 0700 UTC IchorCoal and PSP Logistics were ranked in second and third respectively for the same reason.

Visually Derry~Londonderry~Doire is leading the pack on starboard tack, but being further west may be at a disadvantage when the next flurry of gybes brings them back inshore. It could be a test of nerves in the lighter conditions.

Skipper Dan Smith says: “We are now heading offshore under spinnaker with close racing between LMAX Exchange, Unicef and Garmin, who have been fast all day. Light winds are coming…how the fleet deals with them is likely to decide the positions over the next few days. We eagerly await our next weather file.”

This morning he described conditions ahead of the front as ‘squirrally’ and he added: “What looks like a rather unenthusiastic secondary low seems to be trying to develop along the front near you. This shouldn’t be at all strong, but it will play merry hell with the local winds.”

However, once that’s gone through the wind is expected to strengthen again over the next 24 hours and the fleet should get back into moderate NW/NNW winds driven by the resurgent E Pacific High.

Meanwhile the duel between LMAX Exchange (AKA Le Maximus) and Unicef (AKA HMS Unicorn) is continuing.

LMAX Exchange skipper Olivier Cardin observes: “As I'm writing this blog, all boats have disappeared from the Automatic Identification System (AIS); all except one! HMS Unicorn is still chasing us 2 miles away. I guess, we will have another interesting race again with these guys.”

In response, Skipper Martin ‘Cloughy’ Clough comments: “Dawn broke to find Unicef in second place after some top helming during the night from both watches…The sailing this afternoon was idyllic with Le Maximus alongside for company.

“Tomorrow looks like it could be a stop /start day and looking at the AIS now as I write shows 8 yachts within 15 miles of each other all on different headings.”

And indeed it could, Ash Skett on Garmin sums it up: “The wind has continued to decrease throughout the day and the beginnings of the really soft stuff has started to take hold.

“Tactics are starting to come into play more now as each skipper makes a decision on where to find the breeze. Only time will tell who gets it right.”

With around 3400 nautical miles to go to Panama in the PSP Logistics Panama Cup, stay tuned to the Race Viewer to follow all the action, on the hour, every hour.

If you are inspired by our crew and would like to take part in the 2017-18 or 2019-2020 editions of the Clipper Race, contact our recruitment team to find out more.