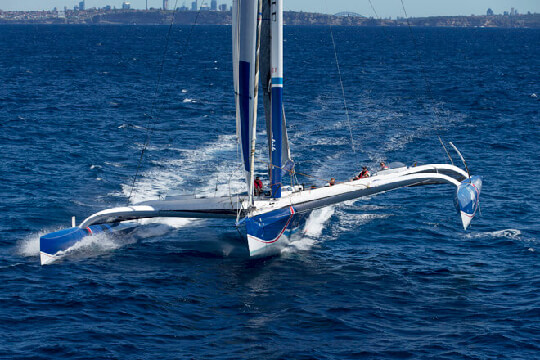 Team Australia is the holder of the World Sailing Speed Record Council’s fastest time between Sydney and Auckland and between Sydney and Hobart. As well as setting speed records, Langman was tackling some of Australia’s medium distance eastern seaboard races until the multihull was dismasted when leading the 2015 Pittwater to Coffs Harbour race.

For two years the tri sat idle as the skipper sorted through the logistics of a new rig and kept himself busy with an 18-footer campaign and multiple Sydney Hobarts on board his beloved Ranger called Maluka.

Now the Sydney based Langman and his core crew are planning their long-awaited comeback knowing that Simon Hull’s Groupama Race multihull record time of two days 33 minus 12 seconds set in 2016, with what was Team Vodafone Sailing, now Frank Racing, is ripe for the taking, given the usual tradewinds were largely absent in the record-setting year.

“We considered entering the last Groupama but the boat was in re-fit,” Langman said. “Now we have a new mast and we are planning to enter the Royal Queensland Yacht Squadron’s Brisbane to Noumea feeder race to bring us to New Caledonia. My boat has a strong French flavour as she was French owned, as Banque Populaire IV, and won the double-handed Transat Jacques Vabre from northern France to Brazil.”

The fleet leaves Noumea and sails counter-clockwise alongside reefs, past the compulsory waypoint at the Grand Passage and inside the UNESCO World Heritage listed turquoise lagoon. Warm waters and tradewinds are key selling points for the giant windward/leeward course from the east to west coast.

Nineteen crews took on the Groupama adventure in 2016 and record times were set in both the monohull and multihull class. Encouraging early numbers in the feeder races and 17 Groupama Race entries representing Australia, New Zealand and New Caledonia point towards a great sixth edition.

The organising club has arranged for all Groupama entries to be berthed together at Port Moselle, encouraging camaraderie and friendships among the race crews, and facilitating an onshore festival of parties and entertainment showcasing plenty of South Pacific hospitality.