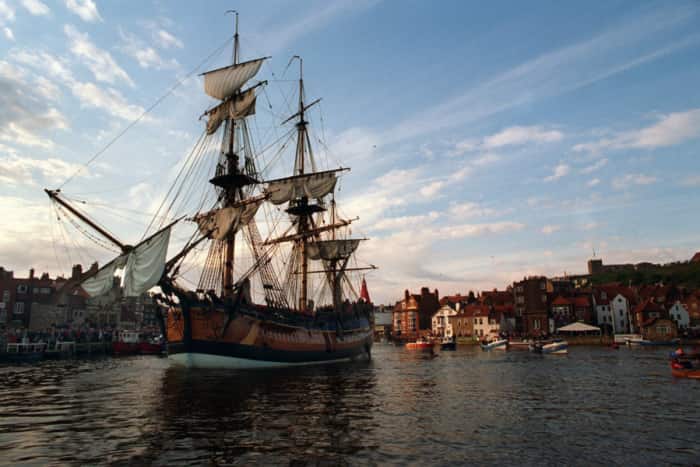 A bag of fish and chips on the harbour wall at Whitby – if the seagulls don’t get it first – is a holiday tradition that goes back generations. But this summer’s menu will be sourced from even more traditional ingredients.
A celebration of the 250th anniversary of Captain James Cook’s first voyage will see chefs on Endeavour Wharf recreating some of the dishes that would have been eaten on board the ship from which it took its name.
With a cargo of dry, salted beef, hardtack crackers and live goats, sheep and pigs, the vessel was a veritable Noah’s Ark, its crew sustained by what they slaughtered and by exotic fruits and animals they found en route. Those who declined the rations of stowed cargo and of captured and cooked turtle and even walrus meat were summarily flogged.
Cook, born at Marton near Middlesbrough and apprenticed at Whitby, will be the subject of a weekend-long event in July to mark the landmark anniversary of his voyage to the south Pacific Ocean and the fabled “unknown southern land” of Terra Australis.
Alongside the family events and a visit from one of the tall ships racing off the coast at Sunderland later that week, a “live cooking theatre” will be built on the wharfside, with a challenge to the region’s best contemporary chefs to concoct something edible from the same ingredients.
“I have advised them that if they base their special meals on pork, they won’t go far wrong,” said Charles Forgan of Whitby’s Captain Cook Museum, an expert on the three-year expedition that set sail from Plymouth in 1768. “Cook knew the importance of keeping his men healthy,” Mr Forgan said.
“As a younger man he had seen the results of scurvy and he knew that if they didn’t have fresh food and they didn’t eat what was given them, they would be useless. He saw flogging as preferable to scurvy.”