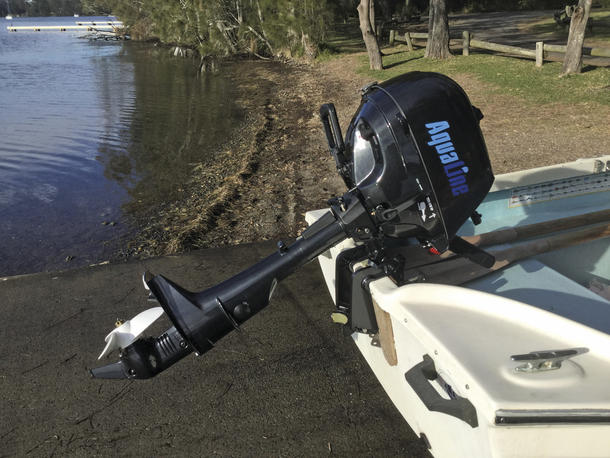 Aqualine is a Chinese company that manufactures only outboards. Its models are based on Tohatsu and Yamaha designs but with subtle changes, in line with the Chinese policy of value-adding to products.

The F2.5 is Aqualine’s smallest four stroke outboard and is based on Yamaha’s F2.5A. But, unlike the F2.5A, the upper cowl is rounded aft and combined with a black paint finish.

The F2.5 appears remarkably compact. Like the 85.5 cubic centimetre Mercury and Tohatsu competition, the F2.5 has a leg designed for transoms to 40 centimetres (16 inches); whereas the 68cc Suzuki DF2.5 is intended for only a 38cm (15”) transom height.

Like the Suzy the F2.5 has a large carry handle while the others are an annoying two hand lift. The F2.5 can be either stowed on its tiller side or aft up on moulded lugs, providing more flexibility than the others.

Unlike the direct competition, the F2.5 has an unusual cylinder head location, offset ten millimetre from the crankcase. This allows for the carburettor to be mounted alongside the head instead of angling the power head to one side. It also provides sufficient space for the engine sump oil filler cap and oil sightglass.

Whereas the oil sightglass in the competition is vertical, the F2.5 has a horizontally-mounted concave dish under glass. When oil is seen in the bottom of the dish the 0.35 litre sump is at the right level. Lubricating oil is supplied to the crankshaft and wrist pin bearings and the overhead valve rocker gear via a simple splash system, eliminating the need for an oil pressure pump and low oil level warning light.

Quicksilver FCW (four cycle water-cooled) SAE 10W30 is recommended by the Australian Aqualine distributor, a good choice as in my opinion it is the finest four stroke outboard oil I have ever used. My own four stroke outboards have been running this oil since 2003 and it’s rated to over 40 degrees Celsius ambient temperature so can be safely used in tropical climates.

Like the competition the overhead valves are driven by rockers and push rods from the gear-driven camshaft, a proven design for reliability. An effective thermostat also enables the engine to warm quickly from cold and maintain reasonably constant running temperatures to reduce exhaust emissions, while the large leg just above the anti-ventilation plate allows exhaust gases to expand and be cooled by water around the leg, effectively scavenging the exhaust system for better running efficiency. Though, surprisingly, the F2.5A and F2.5 only have an OEDA ‘2 star’ emissions rating whereas the competition is rated ‘3 star’.

Four trim positions and an automatic tilt lock are provided with the latter allowing a higher tilt than the competition, which have simple stopper knobs. The higher tilt is useful for clearing the leg and lower unit from stern wash when the engine is mounted on a small tender being towed. A turning limiter engages when the engine is tilted and prevents the power head from swivelling 90° or more which would allow sump oil to flood the cylinder head.

The steering mount collar and gear shift lever have grease nipples and the lower cowl or engine pan have rubber plugs to access the spark plug and carburettor drain screw. The spark plug is a standard NGK BR6HS that is readily available.

The 0.9 litre integral fuel tank is mounted atop the power head and gravity feeds via a replaceable fuel filter to the carburettor. This ensures the bowl quickly fills when the fuel cock is turned to the on position, eliminating the need for 30 seconds or more, as with the competition, for fuel to reach the carburettor.

Unfortunately to access the overhead recoil starter the fuel tank must be removed and the tank position makes accessing the rocker cover to check valve clearances difficult. There are always compromises in small outboards!

The standard toolkit is the most comprehensive I have ever seen for a small outboard and even includes a spare water pump impeller and washers for the sump drain plug and lower unit oil drain and fill screws. Box spanners are provided for the spark plug and trim adjustment nut, a fiddly arrangement that should be changed to a clip-in rod design. There is also a starter cord with handle, should the overhead unit fail.

Prop swapping is incredibly easy with a castellated nut screwed onto the splined prop shaft and locked in by a cotter
pin. No fiddly shear pins to worry about deep-sixing when swapping props. The standard six inch pitch alloy prop suits most applications though may overload the engine when used on small tenders that have short waterline lengths, such as the Walker Bay 10.

The first service is at ten hours then every 100 hours or annually. The recreational warranty is an impressive four years.

Getting to know the F2.5

In late May the local distributor supplied me with a brand new F2.5 for testing on my fleet of trailerable hulls.

As with all loan outboards I carefully ran in the F2.5 according to Aqualine’s recommendations. The guidelines are nowhere near as strict as they used to be for four strokes and wide open throttle (WOT) operation is not recommended for the first two hours then a maximum of five minutes at a time for the next eight hours. I also recommend a cooling period between WOT operation of at least 15 minutes at three quarters throttle opening or less.

With the short fuel line from tank to carburettor the F2.5 can be started a few seconds after the fuel cock is turned on. Pull out the choke knob, crank the engine and push back in the choke. As the engine has fixed ignition timing it idles in neutral at 2000 to 2200 revolutions per minute so, once started, I let the engine warm for about five minutes, by which time it has reached normal operating temperature before engaging gear. So far the engine has always started first pull: hot or cold.

Only once after the engine was transported on its side did it blow any oil smoke on cold starting but in following seas there is always a slight oil smell. The pilot water discharge or telltale has an incredibly strong flow so I suggest using the head before taking this engine for a run!

Of the hulls used the F2.5 best performed on my early seventies Mk1 3.35 metre Savage Gull dinghy and 1981 all-original 3.8m Fairlite Gull sailing dinghy. On both hulls the F2.5 failed to reach its designed WOT revs. but, when using outboards at displacement speeds, throttling back slightly removes most of the engine load, so slight over-propping is not detrimental to engine longevity.

Due to its longer waterline length the engine performs better on the Fairlite Gull at midrange speeds but achieves faster speeds on the planing-hulled Savage Gull.

On both hulls vibration levels are low due to the combination of big cylinder bore and short piston stroke. Noise levels are lower than the competition on these hulls but on the Fairlite Gull the F2.5 is not quite as gutsy as the Mercury F2.5, which is derated from 2.6 kilowatt (3.5 horsepower). However the Mercury is 15 per cent heavier and lacks a carry handle.

The F2.5 was quicker than a DF2.5 under identical test conditions and had lower vibration levels, but not quite as low as the Merc.

After a total of seven hours of salt water leg/lower unit immersion no corrosion was apparent anywhere on the loan engine and clearly the large zinc anode beneath the anti-ventilation plate was doing its job. This is useful for tenders rafted alongside yachts having copper anti fouling.

Testing of the F2.5 has shown just how archaic small two stroke outboards are compared to four strokes.

The F2.5 is clearly too powerful for small tenders like the Walker Bay 8 and 10 and its leg length would immerse the prop too deeply. But on larger dinghies, like the Fairlite Gull, it is absolutely perfect and would suit inflatables to three metres with the torque to handle stiff head winds when needed.

That single cylinder four stroke exhaust beat sure appeals to the nerd in me!