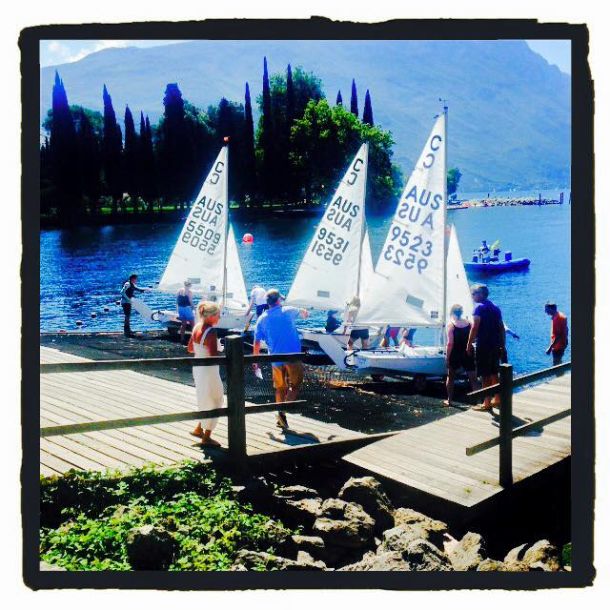 Young Australian sailors have got off to a fine start at the International Cadet world championships on Italy’s Lake Garda, with Tasmanians Sam Abel and Hugo Allison leading the pointscore after the first three races overnight and five Australian crews in the top 10 of the 58 boat fleet.

Abel and Allison, from Sandy Bay Sailing Club in Hobart, won the opening race and followed this with a sixth and second place to be one point ahead of the British crew of Tom Collyer and Cara Bland who notched up a 6-3-1 score.

Racing got under way in good sailing conditions following a small earthquake during the night that woke up some competitors.

A second Sandy Bay Sailing Club crew, Angus Price and Archer Ibbott, also scored a race win. They are eighth overall with their first place sandwiched between a 12th and seventh.

Port Lincoln Yacht Club’s Marty Hood and Jack O’Donnell are sixth overall with a score of 3-8-4 with Sandy Bay’s William Cooper and Laura Cooper in ninth place overall with a 5-19-9 score.

In 10th place is the Sandringham Yacht Club crew of Julian Sasson and Mischa Suda with an 11-10-13 opening day result.

The other two Australian crews, Dominic Randall and Ella Purnell and Oliver Manton and Benjamin Garner, both from Royal Geelong Yacht Club, are 25th and 26th overall respectively.

Well a good first day for Australia at these world championships. We have all our team in the top half of the fleet and five in the top ten and the overall leader in Sam Abel and Hugo Allison. Three races were sailed and we had two heat winners, the aforementioned won heat 1 and Angus Price and Archer Ibbots won heat 2.

It was a nice day's sailing with a typical Ora breeze. We were fortunate to be first launched and got in a good pre race session in the building breeze. The coach boats are only allowed in certain areas and it was with baited breath that we would wait at top mark. Very relieved to see the AUS feature in the top few each race.

The focus for the day was to remove expectation from the agenda, if we just concentrate on sailing well the results will come. So just think about sailing well, not the placings. Expectation creates apprehension, which creates nervousness. Just go and sail and enjoy the day.

Looking ahead, nothing really changes. You are always one loose knot, errant decision, undone shackle or poor tack or gybe away from a bad race. So no time for complacency. Just do the things you always have done, the boat the crew and the gear are all the same.

Another pleasing aspect of yesterday's sailing was we had a couple of boats had horror days with capsizes, 720's and such. These boats are as good as any in the team, as has been shown in our lead-up sailing. After all the drama of the first day they are still mid twenties and will improve. They can serve as a reminder of the fine line we sail on to those doing well initially.

Looking forward to another day on the water.