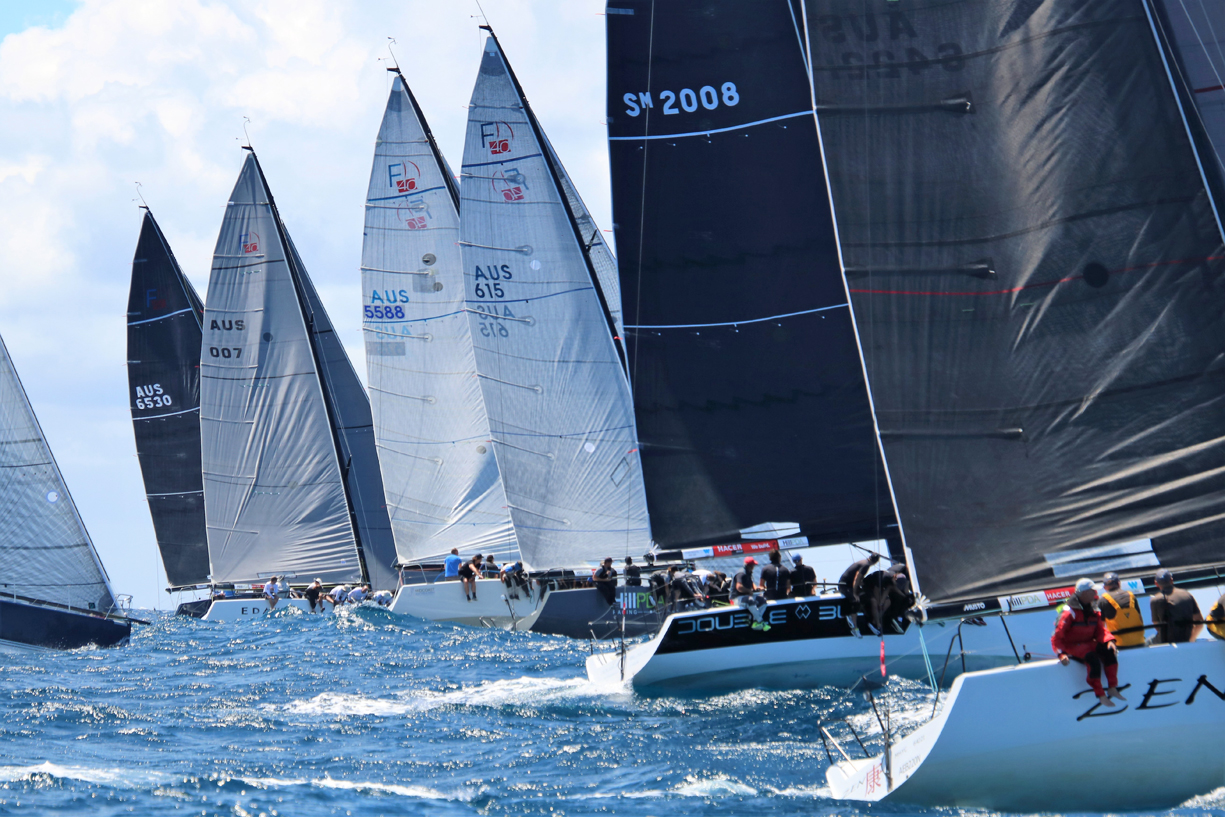 Skipper Martin Hill, tactical weapon Tom Slingsby and the rest of HillPDA’s credentialed crew produced a very worthy set of scores on day one of the Farr 40 NSW State Title staged off Manly in Sydney.

HillPDA is perched three points ahead of both Tom and Alan Quick’s Outlaw and Jeff Carter’s Edake following the shortened NSW Championship opening bout on Saturday.

When the south-east breeze climbed over the class’ wind limit of a consistent 25 knots, a consensus was reached and the race committee canned the fourth race.

Slingsby, an Olympic gold medallist and professional tactician at the highest-level events, said: “We are in with a good shot this weekend. We just need to get a few races under our belt tomorrow inside the Harbour. Edake, Outlaw and Nutcracker are not far behind us.

“It’s a very strong class and has been for a long time. The people are great to sail with and it’s always really competitive,” he added. Slingsby was part of Hill’s 2012 Farr 40 worlds crew and one of Guido Belgiorno-Nettis’ Transfusion teammates at various times.

Tactician David Chapman and the rest of the Outlaw crew squeezed the top boats at every opportunity, taking one bullet off HillPDA in race two then posting an unwelcome fifth in the next race.

The role of Outlaw’s tactician is a new for Chapman, but it’s his customary post on other boats. “We had a few injuries and crew changes and wanted to put the best people in the best positions for the states. I’ve got injured ribs so can’t grind the main.”

Father and son Alan and Tom Quick came to the season opening point score untested and won their first class event, a result that surprised the established crews. “Then we lost our way a bit with crew doing other regattas,” Chapman added.

“We are trying to build on relationships and move forward to the nationals next month. It’s going to take some time to get used to each other, and unfortunately we are at the back end of the season, but we are on track.”

Nine Farr 40s from Melbourne, Newcastle and Sydney is the biggest class get together for the 2017-18 season and the top fleet enjoyed decent wind for the first three races of the season’s penultimate series.

Middle Harbour Yacht Club PRO Phil Yeomans described the conditions: “The first two races were sailed on the Manly Circle in 16-18 knots. We started the first race at a bearing of 160 then changed to 155 and the breeze was steady from then on, until we made the phone call and agreed to head back to the club.

“We have a great volunteer start and mark team, and we had a great day.”

After racing, the Australian Farr 40 class association and owner/sponsor Rob Reynolds put on an amazing beach party at Middle Harbour with great food and live music for 120 guests, including sailors, volunteers and race officials.