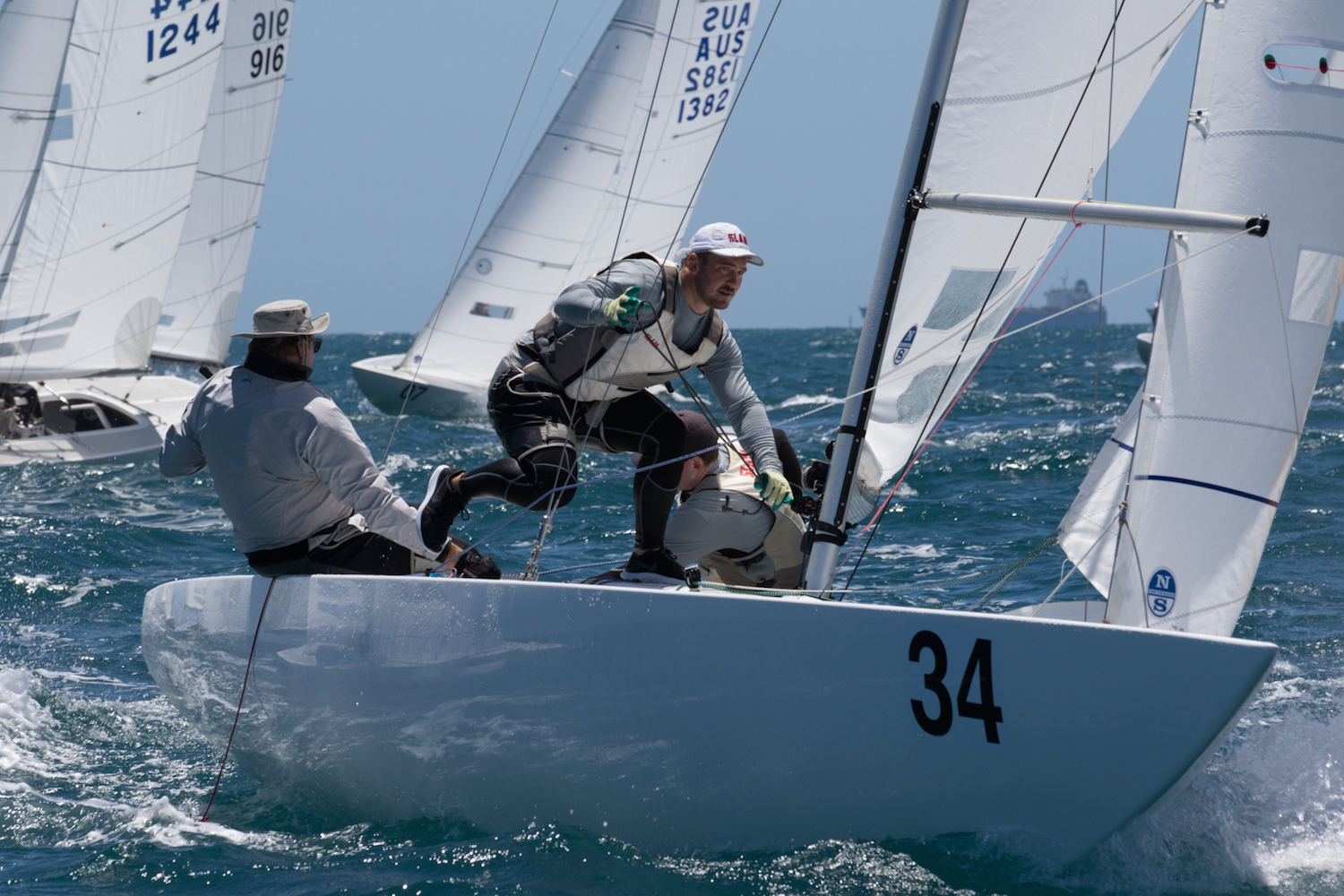 Magpie, sailed by Graeme ‘G.T.’ Taylor, James Mayo and Richard Allanson sailed the final two races today to seal the 2018 Etchells Australian Championship title by a comfortable 9 points and equal John Bertrand’s record of three back to back wins.

Representing Mornington Yacht Club, the crew sailed a very consistent regatta and had impressive boat speed both up and down the course all week – this after Taylor and Mayo sailed to second at the Etchells Worlds last October.

There were two windward/leeward course races on the final day in warm sunshine and winds ranging from 8-17 knots. The first race was light and kept shifting in the final moments before the start causing some delays in the start routines. At the third attempt the full fleet of 32 boats got away to sail 1.5nm legs to a windward mark in the lee of Carnac Island.

A new race leader emerged round the top mark in Chris Pratt and his crew from Royal Perth YC. The red spinnaker of Sydney based Jeanne-Claude Strong and white kite of David Turton and his Queensland crew were chasing down the first run, which was a fairly even split over the course. The gate rounding was again really packed and a bit frantic.

Around the top for the last time appeared the red kite of Strong just ahead of Turton. The two were tied on equal points at the start of the day and Michael Manford’s Croc was a bit buried in the pack.

As they came down to the finish line, Strong just managed to cross Turton’s bow to slide over the line for her first win. Turton made a rapid gybe to protect his second position at the boat end of the line from earlier race leader Chris Pratt from RPYC.

Martin Hill and his crew from Sydney were back in the mix with fourth. Taylor recorded his worst result with an eighth! The whole fleet of 32 boats finished the course within 4 minutes of each other.

There was a short wait for the final race when the wind tried to shift again from 210 to 220 degrees. Eventually after another two U flag starts, the final race got going at around 1240pm in a slightly stronger 15 – 17 knots and a building chop. This time the lead boats were again camped down at the pin end, but three were called a bit too eager picking up the dreaded OCS radio call.

Michael Manford and his crew Dean McAullay and Nick Gray from RFBYC got a great start at the pin and led around the windward mark by several boat lengths. Again David Turton was in the lead pack but Jeanne-Claude Strong appeared to be deep in the fleet. Another fairly even spread on the run and another congested gate rounding.

For the final lap up to the top mark the breeze started getting a bit perkier and the waves building.

Manford sailed to a fairly comfortable victory to secure third position overall in the regatta. Turton crossed second, an excellent effort for the Queenslanders who also took second place overall on the final day.

“In the first race today we missed a shift on the first upwind beat which would have put us in great shape if we had got it but it was nice to come back in the final race of the series and get a first,” Manford said.

“We got a great pin end start and managed to control the fleet from then onwards and were really running well downwind. It was a birdie in the last hole, it was good fun.”

Victorian Graeme Taylor, who was crewed by James Mayo and Richard Allanson from Sydney, pulled through the fleet to cross the line third and take the 2018 Etchells Australian Championship title in some style.

Jeanne-Claude Strong and her crew suffered her worst race score of the regatta (15th) dropping her off the podium, but still finished a very gallant fourth place overall.

After Chris Hampton’s great result in Race 7, he suffered the unfortunate ignominy of losing a crew overboard on the final run causing a dramatic broach. As they hauled him back on board, the mainsheet man apparently fell in rescuing him. Apart from the three boats scored OCS, this was the only DNF.

The Etchells crews have enjoyed four days of lively weather and some superb racing. The Etchells fleet will be returning to Australia for the World Championships, to be held Brisbane on the East coast in October this year.

David Turton said the long trip from Brisbane was really worthwhile: “I’m very pleased with the way we sailed, apart from the first race, we managed to fight our way back from the 7 – 8’s to 2nd’s and 3rd’s and when we have been in the teens we have managed to get back into the 6 – 7’s.

The final word was reserved for the winning skipper Graeme Taylor: “It’s been an amazing week; we got everything in the weather. We had a light air race, heavy air race, a couple in between.

“We’ve had an absolute ball and we’re thrilled with the result. We also really pleased to have won three in a row and matched John Bertrand, who is the only other person to do that, so we have an opportunity to go one better next time. We have a great team of people around us and it just makes it enjoyable as much as everything else.”