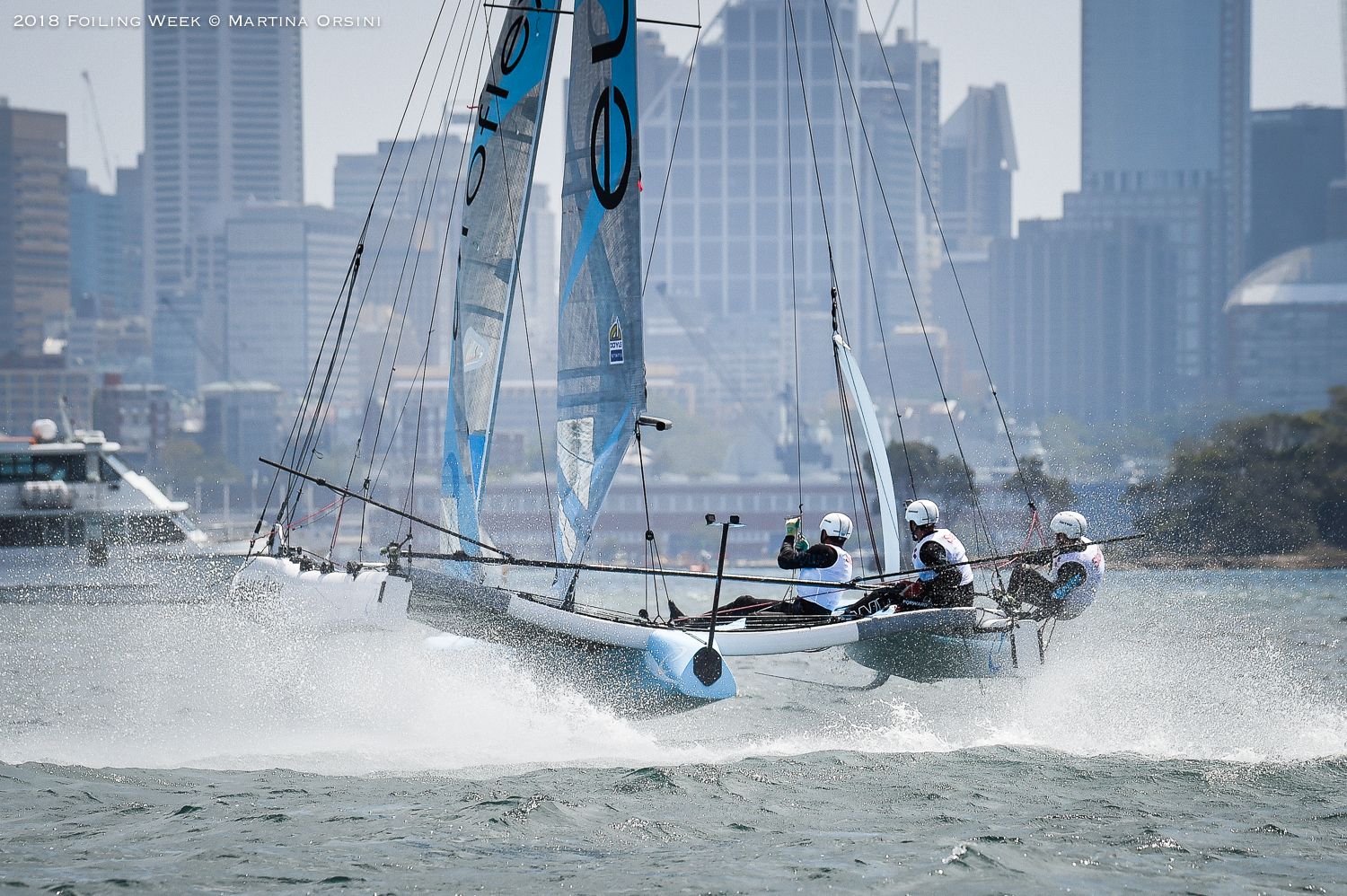 Spectators were treated to an afternoon of stacks and cartwheels as two of the superstar crews of the Super Foiler circuit engaged in a short-lived race as part of Foiling Week.

The Kiwi crew of World Match Racing Champion Phil Robertson didn't even get across the start line, cartwheeling their trimaran in a dramatic crash. And the “hottest crew on water”, Nathan Outteridge, Glenn Ashby and Iain “Goobs” Jensen also had two incidents as they raced around the harbour at close to 40 knots.

The two boats were due to follow the Cock of the Bay course, from Rose Bay downwind to Fort Dennison, upwind to Manly then around Shark Island and back to Rose Bay. But the Kiwis did a big cartwheel straight away.

“It's an incredibly hard boat to sail,” said Robertson. “We only had about 16 knots (of wind) when we tried to turn downwind and it accelerated. We couldn't keep up with the boat. It was not pleasant. a lot of broken bodies. Not nice!”

Fortunately the damage was mainly cuts and bruises and all should be back to normal in a few days.

The other boat fared much better, streaking away up the harbour to the fort, then beating quickly to the Manly mark. That was where the drama began.

Trying to go around a Manly ferry, they had to push the boat up high and hit the ferry's wake. The boat went from around 35 knots to stopped in an instant and Jensen was launched on his trapeze to a point actually above the rig of the boat. Ashby tore his harness (the one he wore to a silver medal at the Beijing Olympics) and Outteridge just avoided joining his two crew members in the water by grabbing the hiking straps and hanging on.

“We had some awesome rides,” said Ashby. It was great, really, really cool. My trap harness is looking a bit second-hand though. It looks as though it needs a bit of sail making.

“It's going to be really exciting racing these things. You have to call on all your skills, a bit of skiff, a bit of dinghy, A Class, tri…”

Outteridge explained that the problem was caused by the rudder popping out of the water when they hit the ferry wake. “The boys got ejected off the back. I was able to hang on to the hiking strap but Goobs was at the height of the mast!

“It's really cool sailing but I think there's a 20 knot limit (on the wind they can sail in). We pitchpoled on the way in too.”

Typically, it was “the analyst” Iain Jensen who was in deep conversation with the Super Foiler shore crew, explaining what had happened and how he suggested they re-rig the boat to avoid it happening again.

It was an exciting finish to the day at Foiling Week, which had started with a Forum featuring engineers and experts from fields such as the America's Cup and from major sponsor Gurit. An attentive audience heard about some of the tricks of the trade that are used to ensure foils of the right shape and strength are designed and produced for vessels as varied as super yacht cruisers and round the world monohulls. The aim, said America's Cup designer and engineer Brett Ellis, is to avoid “rapid unplanned disassembly”.

To watch video footage of the day, and a perfectly-executed foiling gybe by Nathan Outteridge, go to https://www.superfoiler.com/ and click on Two SuperFoilers battling it out together and a foil gybe.