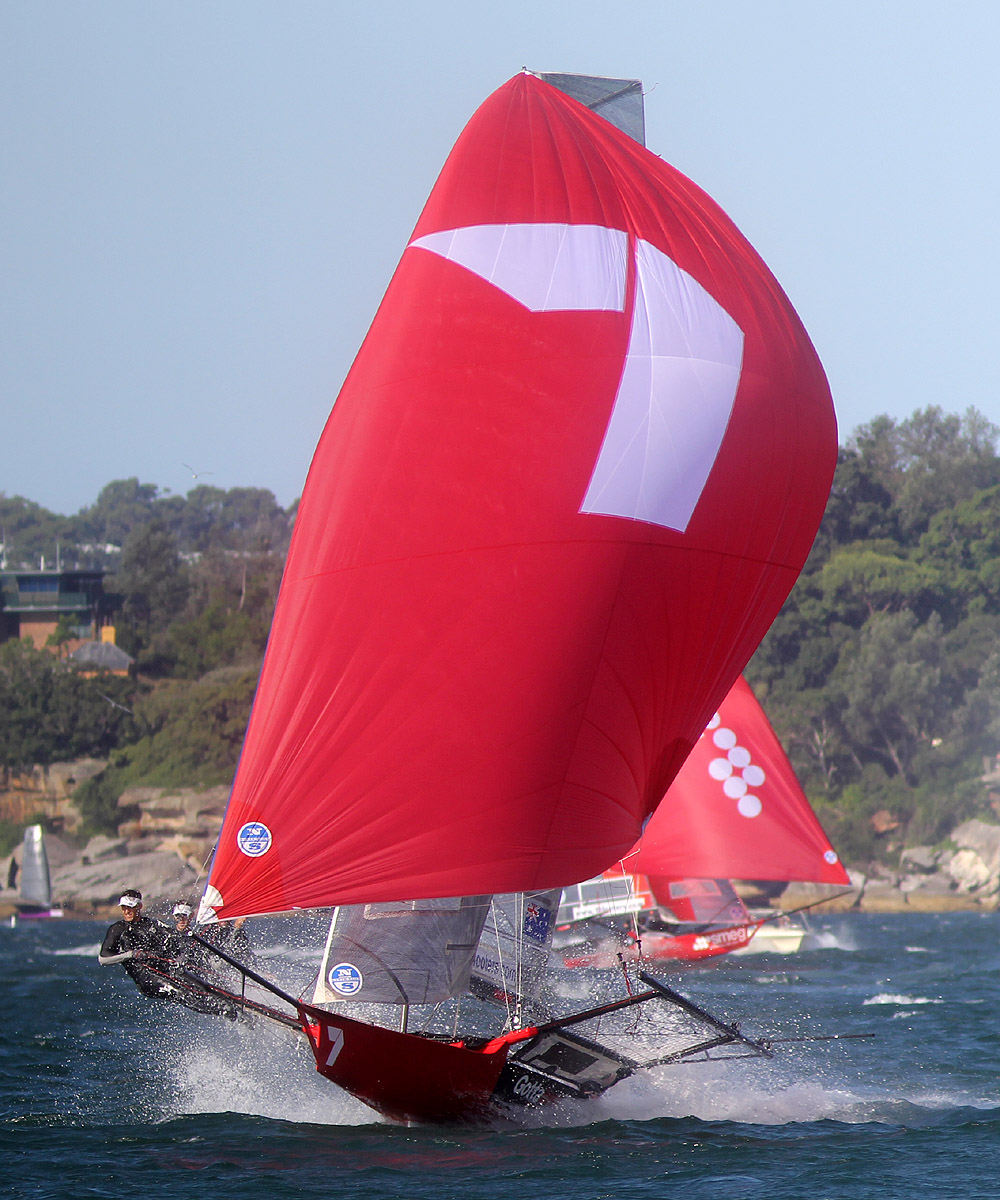 A 20-knot North East wind and run out tide produced brilliant conditions for some wild spinnaker rides in the opening race of the 2016 JJ Giltinan 18ft Skiff Championship on Sydney Harbour today.

In one of the most incident packed starts to a JJs championship regatta, defending champion Gotta Love It 7 (Seve Jarvin, John Winning Jr., Nick Catley) made an outstanding return to their best form to take victory by 47s from NSW champion Thurlow Fisher Lawyers.

Thurlow Fisher’s crew of Michael Coxon, Trent Barnabas and Dave O’Connor chased the defending champion for almost the entire course but were unable to come from behind to beat ‘7’.

The incidents began even before the starter sent the fleet away.

Most critical incident involved the Lumix skiff (Daniel Phillips), which was badly damaged and certainly no possible hope of competing in the regatta.

Conditions saw appliancesonline.com.au installed as the pre-race favourite but the team’s hopes of starting the championship with a win were dashed when the skiff was recalled for being over the line at the start.

Thurlow Fisher Lawyers, Yamaha (David McDiarmid), Triple M (John Sweeny) and C-Tech, along with Gotta Love It 7 were among the leading group on the windward leg to the Beashel Buoy.

Gotta Love It 7 held a narrow lead over Thurlow Fisher Lawyers, Yamaha and C-Tech, with a closely bunched fleet hot on their tails.

By the second windward stretch from Clarke Island back to the Beashel Buoy Gotta Love It 7 continued to hold her lead over Thurlow Fisher and Yamaha and had increased th margin to more than 30s as spinnakers were set for the run back down the centre of the harbour.

7 maintained her advantage to the bottom mark off Clarke Island.

Thurlow Fisher Lawyers was still in second place but appliancesonline had made a great recovery, after her recalled start, to be in third spot, just ahead of Smeg and C-Tech.

Appliancesonline was unable to maintain the charge and dropped back behind C-Tech and Smeg over the final lap of the course.

Coopers 62-Rag & Famish Hotel and Yandoo (John Winning) were among early casualties and both came from a long way back in the fleet to finish sixth and ninth respectively.

Race 2 of the 2016 JJ Giltinan Championship will be sailed tomorrow (14 February).

There will be two spectator ferries following Race 2, leaving Double Bay Public Wharf, alongside the clubhouse, at 2.30pm.

Anyone planning to follow the racing during the championship, on the spectator ferry, should make sure they don’t leave it too late to buy their ticket.