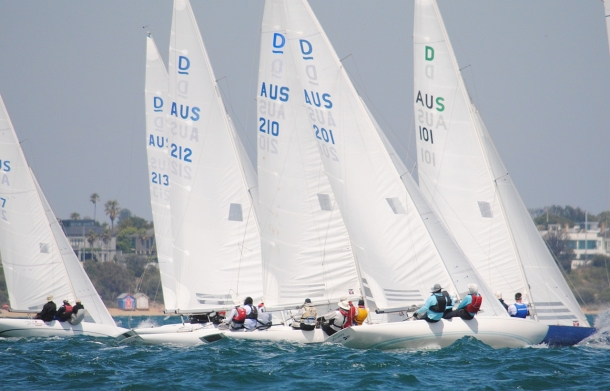 Gordon Ingate’s “Whimsical” from Royal Sydney Yacht Squadron has taken the lead on day two of the Prince Philip Cup – the 2015 Australasian Championship for the International Dragon class.

Today’s breeze was rock steady at 190 degrees all day, building from 8-10 knots for the first start to 13-14 knots for the last run.  The sun was shining, the waves were moderate.

Campbell and Ingate claimed a win each in today’s races, but Campbell’s “Indulgence” is currently sixth overall due to an OCS yesterday.  With a drop, the two boats would be on equal points, two behind Breit, but one more race is required before the drop kicks in.

There is some incredible experience within the crew of “Whimsical”.  88 years young, Gordon Ingate represented Australia in the Tempest class in the 1972 Munich Olympics, David Giles has competed in four Olympics in the Star, and Brad Sheridan is a champion sailor in a variety of classes.  They combined last year for third overall at the Prince Philip Cup in Western Australia.

When several of his competitors were asked how long Ingate has been sailing Dragons, the common reply was, “I have no idea – Gordon has always been there”.

“I bought my first Dragon in 1987 and have sailed against Gordon many, many times since then”, said Campbell.

Raymond Chatfield (RFBYC) and the crew of “Wizzardry” scored 5-2 today to secure third place overall, but Campbell and “Indulgence” should re-join the group aspiring to podium places after the next race.

The regatta has not been without its dramas.  “Asa”, skippered by Victorian Dragon stalwart Don Blanksby, was involved in a collision at the top mark in today’s second race.  The boat was dis-masted and another race is now on to have the boat ready to compete again on Thursday.  Two protest are pending after today’s competition.

Christian Boillot and the crew of “Imagination” are also reeling from their disqualification from both of yesterday’s races.  The Jury imposed the penalty for sailing with a mainsail not registered for the event.