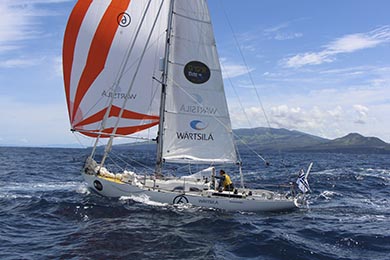 Tapio Lehtinen and his Gaia 36 Asteria photographed 4 miles west of Faial Island in the Azores.

Tapio Lehtinen, the fifth and final placed skipper competing in the Golden Globe Race enjoyed an unexpected rendezvous off Faial Island in the Azores yesterday with the local representative of his Windpilot self-steering sponsor.

Sailing his Gaia 36 Asteria with spinnaker set in glorious weather, Tapio was clearly enjoying his lengthy solo circumnavigation extended by barnacle growth on the hull. “It is light and peaceful and I’m making good progress towards Les Sables d’Olonne,” he quipped.

The 61-year-old from Helsinki also said he was gaining weight, despite running out of cooking gas three weeks ago. “Tesco gave me a lot of good food and I’ve now got used to cold porridge in the mornings and a cold dinner at night.” Ironically, the gas ran out just as he caught a flying fish and he has been eating smorgasbord ever since.

Overnight the winds picked up to gale force, which led to a 122 mile run during the past 24 hours – twice his average daily run since rounding Cape Horn more than 2 months ago. Tapio reported overnight: “You have to respect the North Atlantic, the SW has been howling & gusting over 50 knots through the night. Had #4 reef, 1/4 Yankee & 1/3 Staysail, but should have taken the main down as it hit the waves so badly that the vang broke. Should be able to fix it one more time with my Makita as the wind drops. Making great speed!”

The bad news is that in Tapio’s virtual race against Sir Robin Knox-Johnston’s race winning time 50 years before, the gap between Asteria and Suhaili, has now extended to 678 miles, so the Finn will finish well outside Sir Robin’s 312 day benchmark circumnavigation in 1968/9.

Looking ahead, Tapio is approaching the Bay of Biscay at a good time of the year when the winds are generally stable and from a favourable direction. The race tracker is predicting May 23, based on his average of 3.2knots since the start, but race organisers expect the barnacle growth will slow Asteria whenever conditions are light, and Tapio may not complete his quest until May 26.