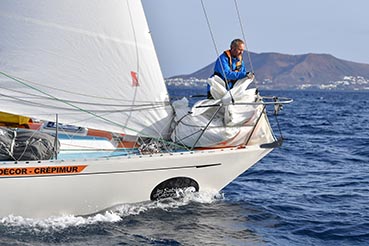 Philippe Péché changing sails for the 7 mile beat back upwind to the Marina Rubicon turning mark after mistaking the lghthouse marking the southern end of Lanzarote. Photo Christophe Favreau/PPL/GGR.

He is still in first place, but French Golden Globe Race leader Philippe Péché threw away a hard-fought 3½ hour lead at the first gate in this 30,000 mile solo non-stop round the world race today after mistaking the lighthouse marking the southern end of Lanzarote today.

It was not until his Rustler 36 PRB had reached the northern tip of Fuerteventura in the Canaries that the Frenchman realised his mistake and had to turn back into the wind and beat the 7 miles Marina Rubicon at the southern end of Lanzarote,

Why he missed the lighthouse’s distinctive pattern of flashes in the early dawn is not fully explained. If he had done so, Péché would have rounded the the mandatory turning mark at 06:30. Instead, it was 10:30 before he had passed across his film and letters to waiting organisers and had set off again.

This time wasting closed the gap between himself and second placed Mark Slats and his Rustler 36 Ohpen Maverick to little more than 9 miles. The Dutchman was delighted. “I’m very happy and feeling strong. I rowed for 6 hours when the winds got very light around Cape Finisterre” he told organisers and after he too had handed across his film, and set off enthusiastically to chase down his rival.

Third placedv Frenchman Jean-Luc Van Den Heede, sailing the Rustler 36, Matmut a further 6 miles behind was equally delighted with the news. The 73 year-old, who has five previous circumnavigations under his belt, said, “I’m very comfortable with my position. This is a long race, and to win,you first have to finish.”

Fourth placed Norwegian Are Wiig sailing his OE 32 Olleanna, one of the smallest in the fleet of 16 yachts, was 75 miles behind the leader holding a 20 mile lead on 5th place British sailor Susie Goodall (Rustler 36 DHL Starlight) are expected to round the Marina Rubicon mark during the night with the remaining fleet following on Friday and Saturday.

The next compulsory turning gate is off Hobart Tasmania.