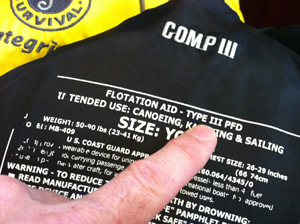 Safety checks the day before the Round the Island yacht race, indicated that many lifejackets are not as effective as their crews assume.

It was found that of the 32 lifejackets examined, three quarters failed safety tests.

Station community safety officer Tony Reeve said: “Maybe the take-up was low because little wind was forecast for the race. Then there was World Cup football. Those who did attend, however, were rather surprised at what was revealed behind the never-opened fastenings on their lifejackets.

“Out of the 32, two were condemned outright, with one having a rusted and corroded Co2 cylinder, barely able to inflate the jacket’s buoyancy bladder. Fourteen had out-of-date inflation systems, the worst having expired in March 2008. Six jackets were missing crotch straps and two had no saddle clips. The final count was that of the 32 examined, 24 were deficient in some way.

“Some may not appreciate that fabric is significantly affected by salt water. Any defects in lifejackets can be revealed by them being regularly opened and inspected, and through manual inflation. Our hope is that this vital message reaches everyone who uses lifejackets.”

As an incentive to submit their lifejackets for inspection, the first 30 were given a free coastal lifejacket by Helly Hansen. Local chandlers were subsequently visited by yachtsmen to seek out replacement parts.

More clinics are planned for Cowes Classic Week from July 23 to 29 and Cowes Week from August 4 to 11.

Station operations officer Mark Southwell said: “Life jackets are now well designed and comfortable to wear and their use is increasing. Tony's team are all volunteers, giving up their time to help the wider boating public understand why maintenance is so important.

“It can be all too easy to assume lifejackets are always up to the job, but just like smoke alarms in our homes, they need to be regularly checked. Someone's life could depend on it.”