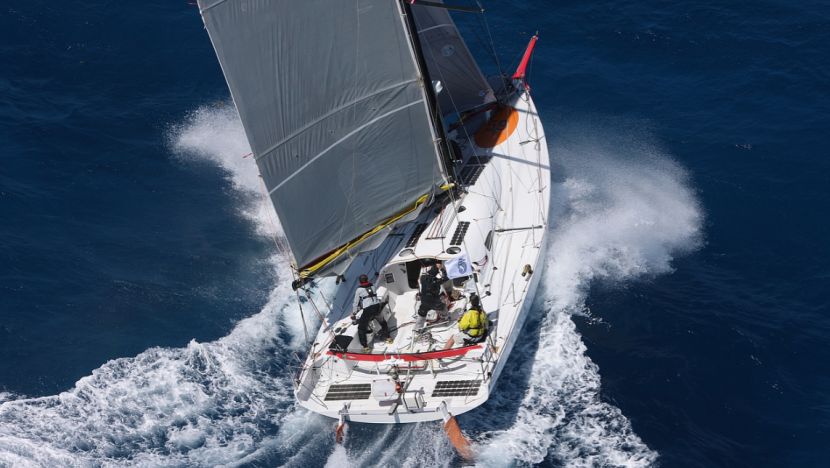 Class 40 RED had to change their route and is on their way to the Azores for a pit-stop.

The first days of the Atlantic Anniversary Regatta's final leg were truly breathtaking: After Line Honours favourite Rambler 88 had to retire from the race due to a rudder issue, Varuna and Malizia – Yacht Club Monaco rose up to the challenge of taking Line Honours. Meanwhile, the Class 40 division is having its own shake-up: RED, who is currently second after Class 40 Eärendil, suffered a rudder damage as well. The entire fleet's forecast skills were challenged by Hurricane 'Chris', who temporarily increased his speed to about 30 knots.

In the early morning hours of July 12, Rambler 88 arrived safely in Newport, RI (USA). The 88ft Maxi had to retire on July 10 when she lost her port rudder after contact with an unidentified object in the water. “We regret that the Line Honours favourite had to retire from the race”, comments AAR Race Officer Stefan Kunstmann. “The safety and well-being of the crews are our utmost priority, and we are delighted that everyone onboard Rambler 88 has reached Newport as expected”.

Rambler 88 dominated the fleet on the water right from the start. While sympathizing with Rambler's early retirement, her return to the US East Coast also opened a window of opportunity for the remaining fleet. Ker 56 Varuna and IMOCA 60 Malizia – Yacht Club Monaco are continuing their epic battle for the top podium spots.

At times, the two yachts seemed to be almost overlapping on the YB Tracker, pacing through the waves with 18 to 19 knots boat speed, bow-to-bow in true match-racing style. Varuna is currently leading in IRC Zero, whilst Malizia – Yacht Club Monaco has overtaken them on the water (at the time of writing at 03:00pm UTC). With more than 1,800nm to go until the finish line, their fight on the water is promising to be an epic battle until the last moment. One milestone on their route to success will be the estimated passing of the modified Swan 441R Best Buddies, which had started in a special division six days prior to the main fleet, and is just about 200nm ahead on the water.

Both yachts are highly motivated and competitive – the AAR is more than just a usual offshore regatta for them. For the two skippers Jens Kellinghusen (Varuna) and Boris Herrmann (Malizia), the AAR will mean a homecoming to Germany and a question of honouring their membership at Norddeutscher Regatta Verein (NRV) and its 150th anniversary. Furthermore, it might be the last regatta for Varuna, at least with the existing crew and Jens Kellinghusen on the helm. For Malizia, every offshore race serves as a preparation for the successful completion of the 2020-2021 Vendeé Globe. Two different skippers, two different objectives on the horizon. Their common denominator is their individual motivation to go the extra (nautical) mile to win the AAR. With Rambler 88 out of the game, and the top spot up for grabs, tension is in the air.

On the day prior to the race start, team Varuna seemed to already foresee the tight fight for glory: “The event attracted a couple of high-potential race teams and it is always good to have strong competition.” said Vasco Ollero from the Varuna crew. “If this should be the final journey, it would be fantastic to sail to Hamburg alongside the Elbe River. The boat was mostly sailing outside of Germany in the last few years, many of our friends and family have never seen her in action, so this will also be an opportunity to showcase her, and moor her in front of the Elbphilharmonie in Hamburg.”

Boris Herrmann, skipper of Malizia – Yacht Club Monaco, is also looking forward to arriving in Hamburg: “We are sailing to our hometown in Germany, which is an exclusive regatta destination for this ship, as I am usually somewhere abroad. I am therefore delighted to spend the next three weeks around Hamburg and be able to show Malizia to local friends and family.”

For Mathias Müller von Blumencron, German skipper of Class 40 RED, the journey home might be a bit longer than expected, having lost their left rudder fitting after contact with an unidentified floating object on July 11. This has forced them to navigate towards the Azores for a pit-stop and the necessary repairs. In the meantime, the experienced crew was able to put a nut from the railpost above the broken end, fix the fitting and get the rudderbolts into the water. Despite heavy swell, they were back to normal twin-rudder boat mode in record speed.

With this temporary solution, plans had to be changed: “On the way to Europe we would encounter the fronts of Chris, winds up to 35 knots. Not a good option. So we decided to go towards the Azores, only 950 miles away. The routing promised fair weather and fair winds all the way to the islands”, says Müller von Blumencron. “[…] We had to give up our spot in the race which started so promising for us.”. But RED is still ahead of Class 40 Iskareen, and not giving up yet: “In the evening the dolphins were playing around the boat. We took this as a sign of sympathy and encouragement.”

The aforementioned hurricane 'Chris' appeared to be not your usual 'racer chaser', who was moving into the direction of the fleet as a Category 2 hurricane with up to 30 knots at times. However, “[…] all boats have chosen their tracks wisely to avoid the hurricane and the Race Committee, together with professional forecasters, will continue to monitor conditions.”, adds AAR Race Officer Stefan Kunstmann. “The hurricane has now been downgraded to a tropical storm and will pass to the North and West of the fleet. All boats are equipped and trained for wind speeds well exceeding the current forecast.”

“It wasn't entirely 'smooth sailing all afternoon' for the full fleet”, comments Arne Hirsch, CEO of the Atlantic Anniversary Regatta. “The safety and well-being of the crews are our first and foremost priority. At the same time, the unknown and the wild forces of nature are part of the game and a calculated risk. As long as everyone is safe and sound, an element of surprise and the excitement that comes with offshore racing and a transatlantic crossing, are ultimately at the core of the sport and its appeal.”

The YB Race Tracker provides live updates on the location of the fleet.