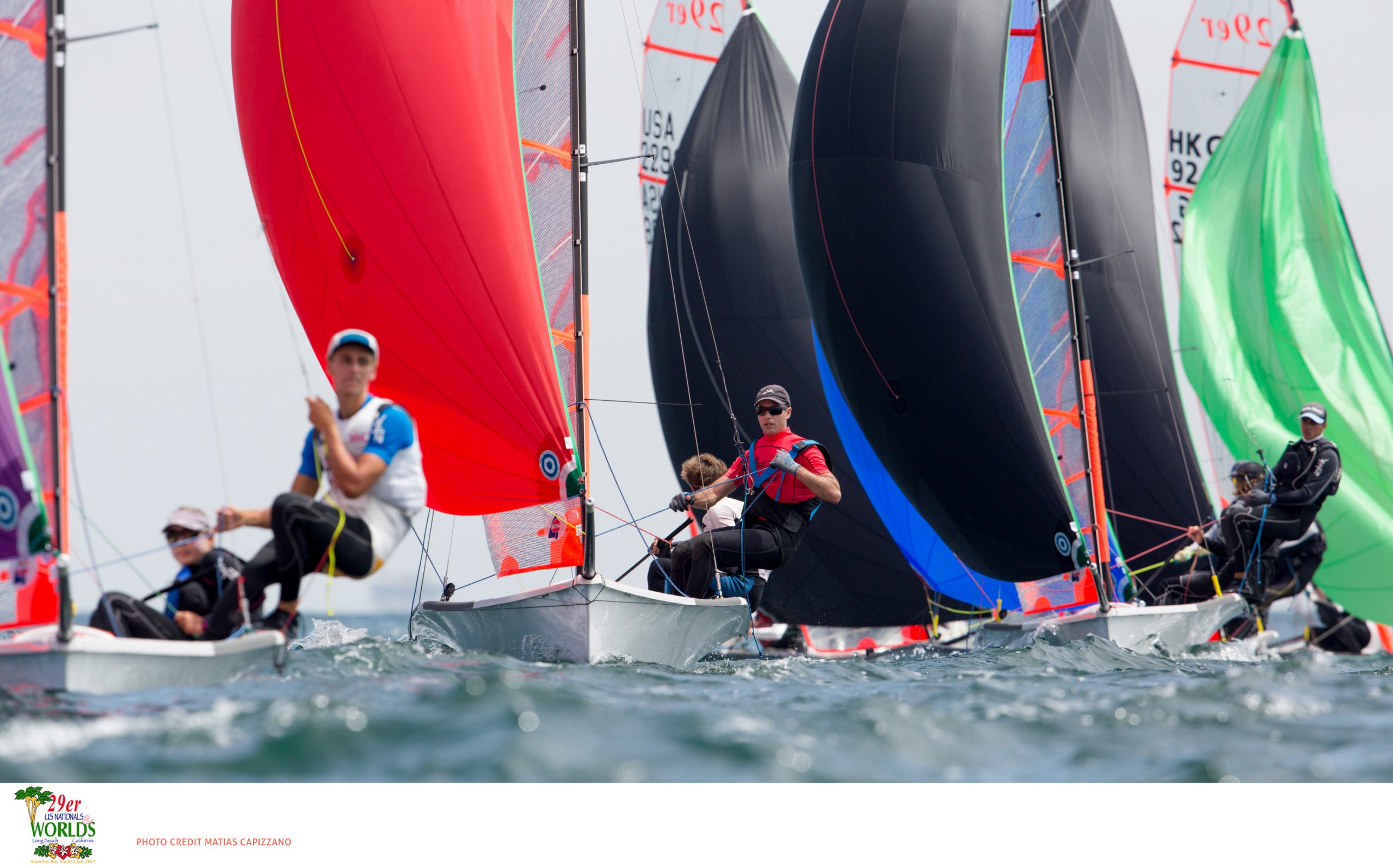 Long Beach, California: Despite a half-hour dock hold, before the boats launched this morning, the wind kicked in on this first day of Final Series races, and the competitors dug in, setting the tone for world-class sailing at Zhik 29er World Championships.

At the first weather mark there was a parade of athletes proficient in knowledge of their boats and their ability to get the most of out of them. Hard tacks were made with precise steering, and well-executed manouvres cleanly launched a colourful array of spinnakers. This was the Gold Fleet; they deserved to be here and just demonstrated why.

Although international competitors continued to dominate the top 10, thanks to the return of typical Long Beach wind and consistently good races, the US team of Alie Toppa and Jacob Rosenberg leapt into a three-way tie for third place with an 8-7-1 record for the day.

“We could just concentrate on speed; where to go, where to tack and jibe,” said the Stanford student. The pair have been sailing the 29er together for less than two years. They chose the 29er for its exciting, youthful and speedy appeal. Toppa previous sailed 420’s. The 29ers are faster, but a lot of hard work, she said.

The College of Charleston student and sailing team member, also 19, is from Ft. Lauderdale. Between clinics, practicing and the championship regattas, she’s been here most of the summer. The game plan for winning is to stay focused, take it one race at a time; stick to the daily and tune-up routines, the pair said.

Finishing with a 3-2-4, Benji Daniel/Alex Burger, RSA, are sticking with their winning game plan and letting it be known that they did not come from halfway around the world not to give it their best.

Benjamin Jaffrezic and Leo Chauvel, FRA, moved up four places to move into second place. Duncan Loiaz/Elias Dalli, ARG, lost their grip on first place and slipped to sixth thanks to an atypical 24th in the second race. Theo Revil/Gautier Guevel, FRA, dropped into the tie with Toppa/Roseberg and Seb Lardies/Scott McKenzie’s, NZL.

The US team of Neil Marcellini/Ian Brill, who edged in at fourth in the Qualifying Series, tumbled slightly to 13, while the 2016 US National Champions David Eastwood and Samuel Merson rose a couple rungs higher.

Scores from the Qualifying Series have been wiped, but competitors started the Finals Series today with their rank in place; carried over as standings in Race 1. These standings however, cannot be discarded as the series progresses.

The top 50 finishers qualified for Gold fleet, with the next 40 in Silver, and the balance in Bronze. The Finals Series continues August 4 and 5. One hundred and twenty nine teams from 17 nations are participating in the Championship hosted by ABYC.

Racing continues on the waters off Alamitos Bay daily at noon. Prize giving and closing ceremony is slated for Saturday evening on the grounds of ABYC.

Making Adjustments
Principal Race Officer (PRO) Mark Townsend reported that the building wind resulted in seeing racers who had excelled in lighter air fall back, and those more experienced in breezier conditions cross the finish line faster. Race 1 started with a casual 7-9 knots, building to 12-14 for the second, and 16 for the third with gusts to 20.

According to Torontonian William Bonin, who sails with his brother Sam, CAN, dealing with the choppy water has been a challenge. The great number of boats and ocean conditions has created more chop than they are used to. To compensate, they’ve been working on sailing the bow down lower than usual. Toronto Harbor can be breezy, but they rarely get waves.

“It’s challenging, not having sailed in these types of conditions,” Bonin said. “But experience also makes a big difference; having a lot of regattas under your belt.” That experience helped them into the Gold Fleet. Despite the sea state, their emphasis is their start. “It’s so hard to come back if you’re rolled off the line. Boats in front have better wind,” he said, and a better chance at the podium.

Looking Ahead
Youth sailing, experiencing a world championship regatta like this, and racing the 29er is the path to becoming an Olympian, said Malcolm Page. The Australian Olympic and multiple-time world sailing champion stopped by the regatta Wednesday and Thursday evenings to spend time talking to some of the competitors. This generation of sailors is probably aiming for 2028, the first real chance for most of them, he said.

“There is something about this sport, the freedom of it, the ability to choose where you go, how to get there, that is really special and can be enjoyed for a lifetime,” said Page. “Embracing the amazing feeling you get from sailing and just having fun is the best way to have your dreams become reality.”

Alamitos Bay Yacht Club
ABYC was founded in the mid-1920s, and expanded in the years following WWII. In 1968, the Club was the first US recipient of the St. Petersburg Yacht Club Trophy: an award presented by US Sailing for excellence in race organization and management. ABYC was recognized again in 1981 and 2016 and maintains a world-wide reputation as a premier small boat club dedicated to the development of the sport of sailing. ABYC is located at 7201 E Ocean Blvd, Long Beach.

Zhik, the title sponsor of the event, is an Australian sailing apparel manufacturer known for innovative gear for all aspects of sailing, combining design and style with technical proficiency and style.