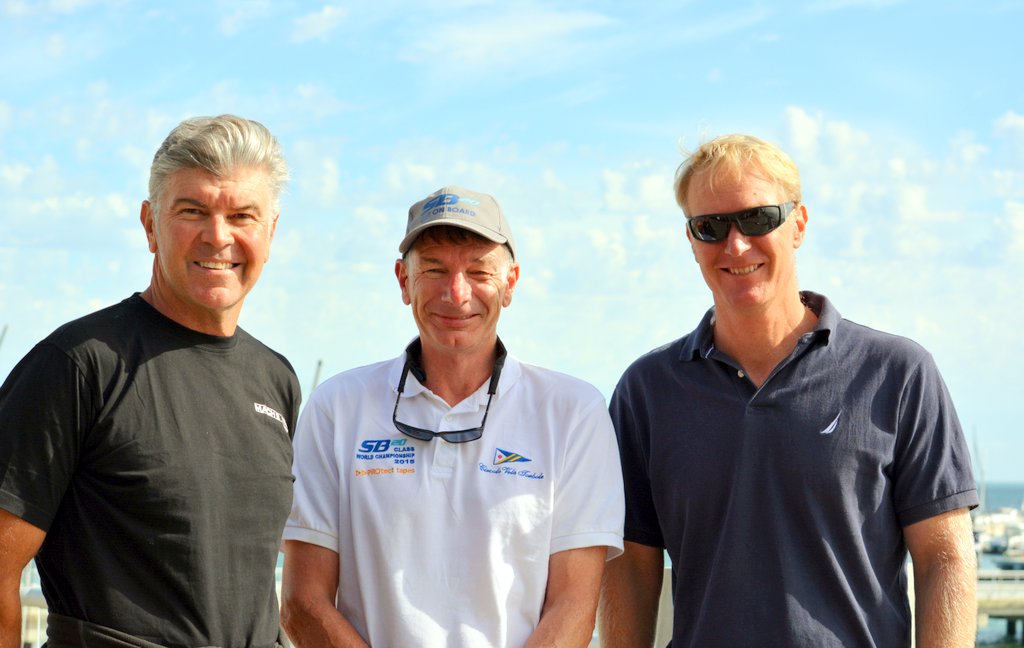 Tasmania’s SB20 one-design sports boat fleet has the sailing talent to produce strong contenders for the class world championship to be sailed on Hobart’s River Derwent in January 2018 with an expected fleet of 100-plus.

This was clearly evident by their performances at the highly competitive Australian championship at Blairgrowrie on Victoria’s Port Phillip which ended today.

Bourke, CEO of Hamilton Island Resort in Queensland, is a winner of seven world sailing championships, an Olympic sailor and key crewman in America’s Cup and Admiral’s Cup competition. He is also credited with delivering the best ever Olympic sailing regatta at Sydney in 2000.

In a brilliant series, Red, steered by Bourke with owner Jefferies and Mark Bulka as crew, won six of the ten races to finish with a net 12 points after two discards.

Strongly pressed by the top Tasmanian boats, Bourke won the final three races, one on Saturday and two yesterday. After the first seven races, Red and the two Tasmanian boats, Karabos and Export Roo had been within one point of each other on the leader board.

Nick Rogers, the stalwart of the class in Hobart took second place overall on a countback from fellow Royal Yacht Club of Tasmania member Michael Cooper, both finishing with a net 19 points.

Rogers, helming Karabos with his crew of Cole Dabner and Simon Burrows, sailed a consistently good series, including two wins which gave Karabos the edge in the countback over Export Roo, which won one race. Crewing for Cooper were RCYT Commodore Matthew Johnston and David Chapman.

Racing was delayed through lack of wind for three and a half hours yesterday with Bourke leading all the way in race nine. Export Roo had an individual recall but fought back to finish fourth.

In Race 10, Tasmanian yacht Balios (Matthew Pilkington) led to the first mark was was overtaken by Red on the spinnaker run with Bourke and his crew giving a masterly display of controlled sailing.

“Nick (Rogers) and Michael (Cooper) have both sailed very well and were really hard to beat…I have noticed that the whole fleet has lifted and there’s great depth there and also great enthusiasm about the upcoming world championships in Tasmania in 2018,” Bourke commented after the final race.