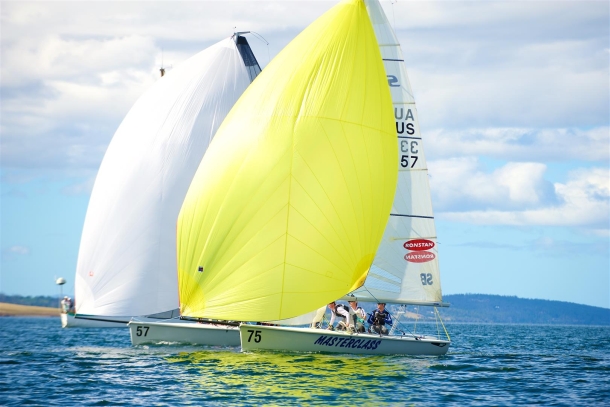 Glenn Bourke and his crew of Rob Jeffreys and Australian Sailing Squad member Jake Lilley have capped off an incredible week of sailing in Tasmania to be crowned the SB20 2015 Australian Champions. Following on from their impressive win in the Tasmanian State titles last week, Bourke was all class, winning four of the eventual 10 race series.

New SB20 boat owner Michael Cooper and his crew Matt Johnston and David Chapman (Export Roo) gave Bourke grief in the first two days of the regatta but Bourke came in to his own on the final day, leaving the fleet in no doubt as to his crew’s sailing prowess and intuitive ability to make the most of the variable winds and shifting conditions on the River Derwent.

The regatta was raced in mostly 25 – 20 knot north westerlies although the final day gave the PRO Nick Hutton a few headaches as he shifted the course to accommodate the unpredictable winds. This limited the number of races in the series from a maximum of 12 to 10.

Race Nine began in very light conditions.  Matt Pilkington (Balios) was a welcome return to the fleet following rudder damage earlier in the regatta and he gave the front runners a run for their money leading the fleet around the top mark, but it was Tasmanian SB20 Class President Scott Brain (Ronald Young Builders) who crossed the line first, after a change in course for the second lap. Leader Glenn Bourke (Red) was second, followed by Rob Gough (Ciao Baby) and James Burman (Masterclass).

Race Ten was postponed for 90 minutes with a start attempted at 1pm in light south easterly air but was postponed directly after the start when a competing north westerly made life difficult for race officials and competitors alike. After a general recall and a black flag, the race was finally underway in eight to ten knots.

Michael Cooper (Export Roo) took advantage of the lighter conditions getting away to lead the fleet around the top mark. In the tightest and most colourful racing of the regatta, the breeze softened after the first lap making conditions tricky for the fleet. Bourke (Red) managed to claw back the lead to take his fourth win of the series from Cooper with Rob Gough (Ciao Baby) in third place. The PRO scheduled Race 11 but after two goes at a start, the race was eventually cancelled.

Bourke and his crew have had a very successful Tasmanian campaign.

“This win feels fantastic. It’s been hard fought – we’ve enjoyed every minute of it – it’s been a great result for us. The River [Derwent] feels familiar now having sailed here a few times. I really like the conditions you have down here – the boat feels pressured up all the time,” said Bourke.

And Bourke is impressed with the growth in the local fleet.

“Tasmania has the predominant fleet in Australia and one of the best fleets in the world. I am sure that the class will continue to go from strength to strength.

Bourke was full of praise for his crew of Rob Jeffreys and Australian Sailing Squad member Jake Lilley.

“Jake is a very strong young man, very thoughtful, very analytical – but together we have had our fun times on the water, and really enjoyed this regatta. I expect that Jake, a very fine sailor, will be representing Australia at an Olympics very soon,” said Bourke.

Tasmanian SB20 class President Scott Brain is pleased with the outcome of the regatta for SB20 sailing in Tasmania.

“We had trying conditions but the race officials and staff and everyone running the regatta did a sensational job. The fleet was of an exceptionally high standard and it was very well done by Glenn Bourke to win the regatta” said Brain.

“We have a great fleet down here and consistent racing which is why our fleet is improving and to get a recommendation from Glenn Bourke as to how good this fleet is really great,” said Brain.