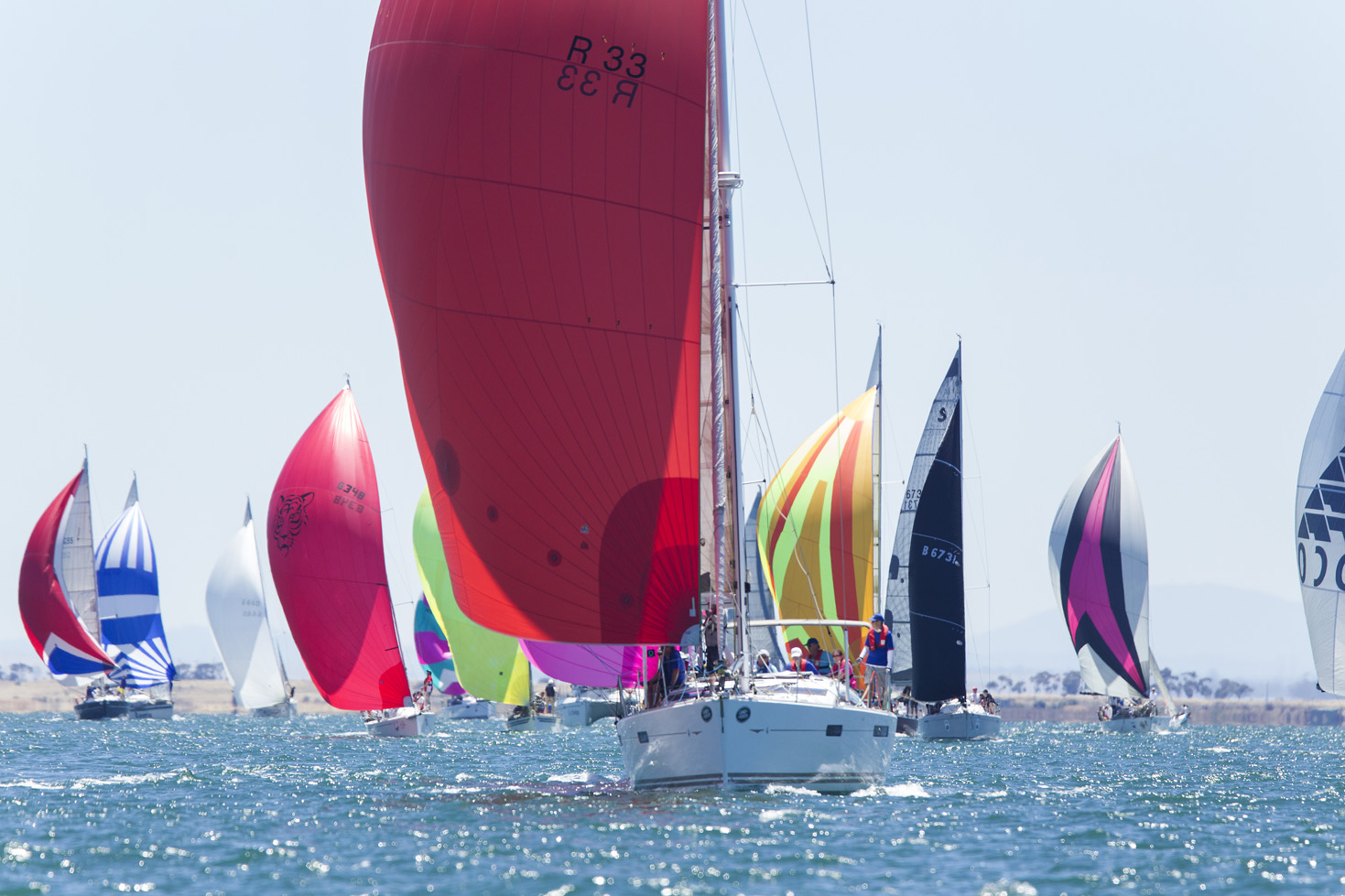 Super Sunday at the Festival of Sails capped off with a twilight sail off the Geelong foreshore, the perfect end to a blissful day’s racing at Australia’s oldest sailing regatta and Victoria’s oldest sporting trophy, dating back to 1844.

A multitude of cruising divisions were sent on a medium distance race from inner Corio Bay to outer, and back again, and short course races were on the run sheet for the Rating Series, Super 11s, sports boats and S80s on day two of the series hosted by the Royal Geelong Yacht Club and presented by Rex Gorell Land Rover.

Light east north-easterly winds and loads of Victorian summer sunshine made for a gentle outing, in contrast to the internal battles starting to develop within each division as the top tier sort out who their main competition is for the podium places that will be finalised on Tuesday January 24, 2017.

In the Rating Series division 1, Nick Bartels’ Cookson 50 Terra Firma (VIC) is ahead on the pointscore and hoping for another light day to put more distance between him and his pedigreed challengers.

“We like the lighter conditions, tomorrow’s meant to be light again so if we can hang on and get a few more good results things might work out for us,” Bartels said. “It’s a good regatta and tough sailing so far. The competition is terrific with M3 from WA, Celestial from NSW and Secret Mens Business from Adelaide. It feels like an Australian championship.”

Andrew Corletto’s Beneteau First 45 Shining Sea (SA) is the Rating division 2 pointscore leader after four races, two of those today on an outer course.  Three races were planned however the breeze faded as the afternoon wore on. On equal points in second is Bruce Taylor’s Sydney 38 Chutzpah (VIC).

Bausele Super 11 National Championship (AMS) leader Poco Loco (Cam Rae) is mounting a solid challenge having finished the bridesmaid at the 2016 Festival of Sails. On conditions on Sunday January 22 the Victorian skipper said, “Light winds, flat water, windward/leewards….. exactly what we like. The perfect Poco Loco day. A glamour.”

The Thompson 8 Game On leads the Gill Sports Boat series.

Minister John Eren last night announced that the State Government of Victoria will extend their support and funding of the Festival of Sails until the year 2021.

Royal Geelong Yacht Club Commodore Chris Williams said, “We are delighted with the State Government’s ongoing support for this iconic Victorian sporting event. As we head into our 175th anniversary in 2018, we look forward to continuing to deliver a truly unique event that sailing enthusiasts from all over the world – and the Geelong community – can truly be proud of.”

The forecast for Monday January 23, the penultimate day of the festival’s major on-water component, is east to north-easterly 10-15 knots turning north-east to north-westerly during the day. A scorcher is on the way with temperatures in the 30s, which is likely to hamper forecast winds locally.