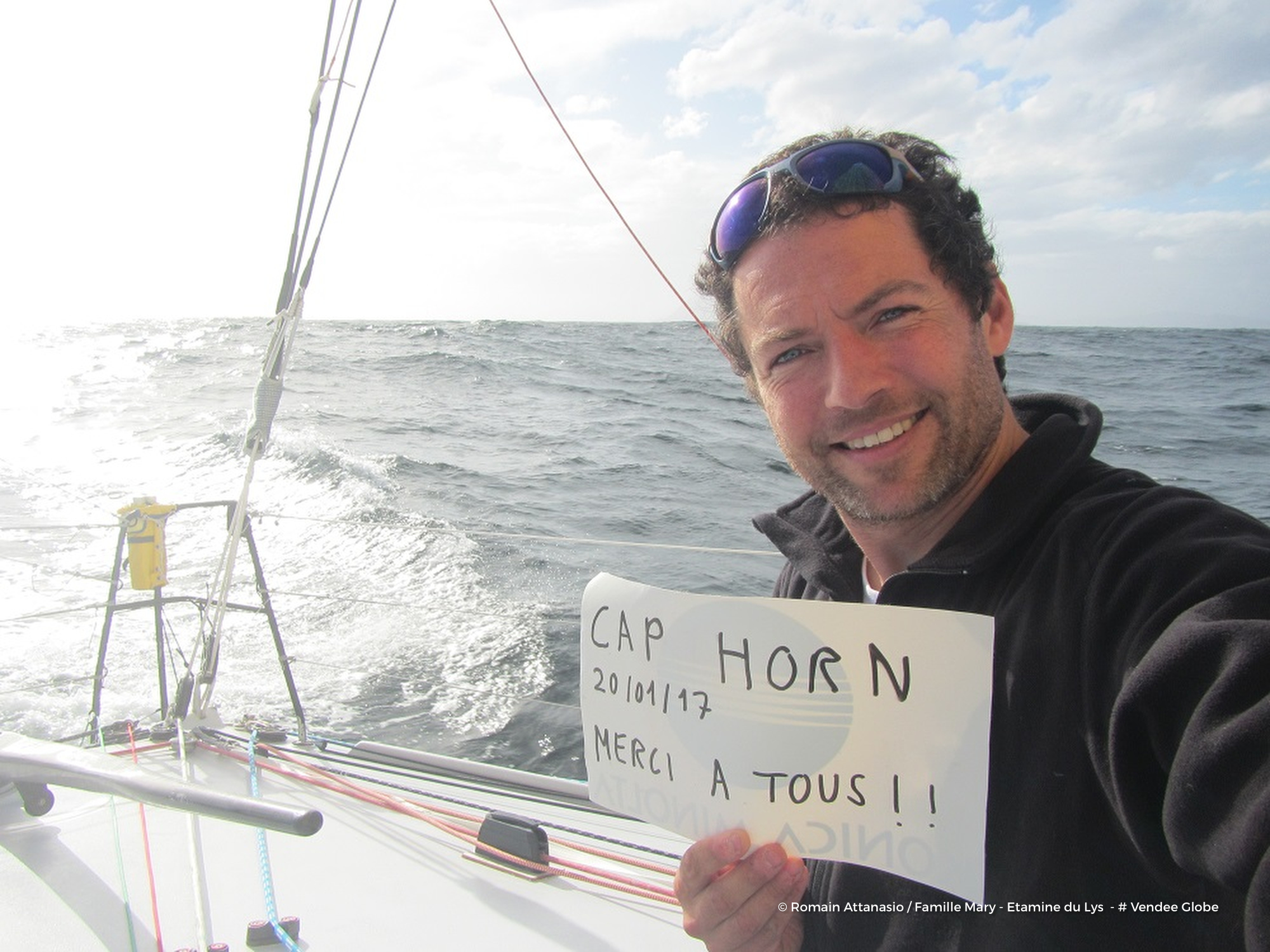 As the dust settles on an historic Vendée Globe victory for French sailor Armel Le Cléac'h, the majority of the remaining skippers are now on the final 'leg' to the finish line.

With Le Cléac'h's Banque Populaire and second-placed Alex Thomson's Hugo Boss tied up to the dock in Les Sables d'Olonne sixteen skippers remain at sea today – and fourteen of them are now in the Atlantic. Romain Attanasio became the 16th skipper to round Cape Horn and wave goodbye to the Southern Ocean at 2043 UTC yesterday, exactly seven hours to the second behind 15th placed Didac Costa. “After so many of racing it's impressive to see land,” said Spaniard Costa, a firefighter-turned-solo sailor. “What's more, Cape Horn is a mythical place in the history of ocean racing.” Only Dutch skipper Pieter Heerema and Frenchman Sébastien Destremau still have the major milestone at the tip of South America to pass.

As the Vendée Globe entered its 77th day 65-year-old No Way Back skipper Heerema, the second-oldest in the fleet after 66-year-old Rich Wilson, admitted to struggling with the enormity of the race. “To be really honest, I'm really fed up,” Heerema told Vendée Globe HQ today. “I've had enough. The race has already been very long and it's going to take another month. It's gonna be 100-plus days and there's still a lot to come – a lot of cold, a lot of heat, and then there's the North Atlantic. I have enough food for 130 days so that's no problem, it's more in the head. I look at another month as a big mountain to climb and I'm lacking a little bit of motivation for that.” Heerema said his motivation to finish the race, regarded as one of the world's toughest sporting challenges, came from the messages of support he receives from friends, family and fans. “I must say the amount of people that are following me is quite unexpected,” he added. “No-one in Holland really knew what the Vendée Globe was before this one apart from a few hardened sailors. But all the enthusiasm and all the 'likes' on Facebook, and the messages and the emails that I get, are really important motivation to carry on, otherwise I'm not so sure I'd want to.”

French skipper Destremau was today some 1,000 miles adrift of Heerema in 18th, around 200nm south of Point Nemo, the most remote place on the planet with no inhabited land for 1,700nm in any direction. “I've been thinking about the isolation for a couple of days, and I never really realised just how distant we are from land,” he said. “It's amazing. It's really something special, something not a lot of people have done. It sums up the immensity of the Vendée Globe.”

At the front of the fleet Jérémie Beyou in third place was making slow progress through the final 300 miles to the finish line in light winds. Beyou is now expected to cross the finish line on Monday afternoon local time. Behind him a drag race for fourth place was beginning between Jean-Pierre Dick, Jean Le Cam and Yann Eliès, the three Vendée Globe veterans neck and neck as they point their bows towards Les Sables. The trio are divided north-west to south-east by 80 miles at the latitude of the Azores, with just under 1,500nm still remaining. StMichel-Virbac skipper Dick had to play doctor after he fell and cut his chin open, requiring him to patch up the wound with medical strips. “I scraped my face in the cockpit when carrying out manoeuvres. I have managed to close up the wound, but it's not easy when you're looking at your face. It took me several goes before I managed to do it. I have staples alongside the wound and I don't know how to remove the unnecessary ones. So the result is quite special.”

Another 1,500nm south Louis Burton was today still struggling to break free of the Doldrums, the French skipper of Bureau Vallée covering just 88 miles in the last 24 hours.