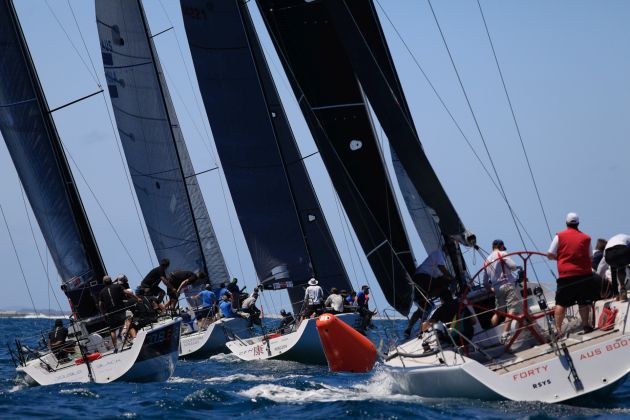 Five wins from six starts easily captured the Farr 40 Newcastle One Design trophy for Martin Hill and his Estate Master team from Sydney, and puts them in a strong position heading into class’ NSW and Australian titles in February and March respectively.

Jeff Carter’s Edake maintained second overall (17 points) after two final races and third placed Exile (Rob Reynolds) on 25 points was the only boat to take a win off Estate Master.

“Five wins out of six isn’t bad,” Hill said. “It’s great preparation for the upcoming titles. Chappo (David Chapman) did a top job on tactics and Darren (Jones) and James (Corrie) were brilliant in the speed department. The whole crew combined beautifully.”

This is the first time the Farr 40 class has sailed at Newcastle and Hill, who finished up with nine points, said the experience was incredibly positive. “Sailing at Newcastle with its beautiful beaches was a great location. We had a wonderful time and the Newcastle Cruising Yacht Club went out of their way to make us feel really welcome.”

Mixed fortunes coloured Exile’s day one. Just before race two began Reynolds’ brother Tony, a trimmer, fell in the heavy swell and spent the rest of the day lying at the back of the boat groaning each time they came off a wave. In race three Exile took the only series win off Estate Master.

“Tony went above and beyond the call of duty; he’s probably got three broken ribs,” Reynolds said at the series conclusion. “He wouldn’t let us take him ashore… probably a good thing as we wouldn’t have won a race that way. Straight after racing the Newcastle yacht club commodore took him to a private surgeon and had him X-Rayed.”

Rio Laser gold medallist Tom Burton was on board Exile as a stand in for the regular tactician who has hurt his back. Burton has committed to the three remaining events of the class’ 2016/17 season, the NSW championship February 11-12 at Middle Harbour Yacht Club, Sydney Harbour Regatta and final National Championships: John Calvert-Jones Trophy March 10-12 out of the Royal Sydney Yacht Squadron.”

“Tom got on well with everyone; there’s a great camaraderie between the crew. We just try to get on with the job and make the boat go faster. We enjoyed the Newcastle series immensely,” Reynolds added.

Day two off Newcastle Harbour began after a half hour delay in light sou’easters which looked promising until partway through the first race of the day when they fizzled out and the race management team signalled they were shortening the course.

Crews spent the next couple of hours making the best of the situation, swimming and waiting. And waiting.

Around 1pm their patience was rewarded when the breeze returned, this time out of the ENE, and race officer Ted Anderson was able to get a final race six away in 10 knots and the best conditions of the regatta.

Anderson noted, “Estate Master was head and shoulders above everyone else and Edake did well, they were the standout boats and the rest were very close in behind them.”

Estate Master has now won two of the three weekend regattas on the way to the business end of the season.