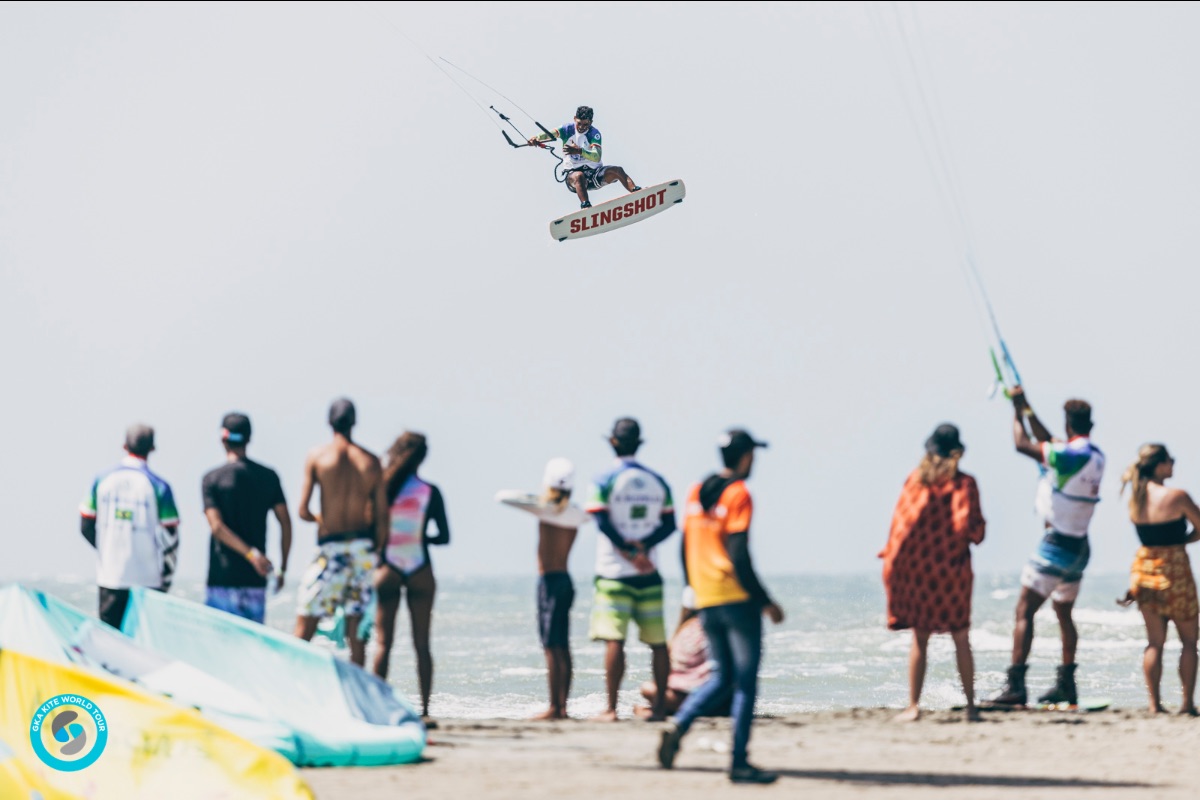 Another beautiful day in Colombia as clear skies dawned bright and early and once again, a strong breeze flowed over the competition area and with a full day of heats on tap, the 2022 GKA Kite World Cup got underway.

It was the windiest start to a day so far and tensions started to build as the competition began to get serious. Today was the first day that riders started actually being eliminated and now the pressure really began to build.

Despite the chance to be eliminated, the energy on the beach was absolutely off the charts, with riders cheering one another on.

“Everyone is supporting one another.” current world champion runner-up, Jeremy Burlando, said.

With an action-packed day ahead of them, the riders showed up with power and stoke and prepared to put on an amazing show.

The competition started with the semi-final heat for the women. Ladies were powered on 7’s, 8’s and 9’s.

Claudia Leon battled against Estefania Rosa, Suami Cavallo and Bruna Kajiya. Leon and Rosa started out strong, with powered 315’s. Kajiya answered back with a 315 of her own, followed by a huge slim chance, scoring a solid 8.5 points. She then threw a perfectly executed back mobe to secure a solid first place into the Women’s final.

After a few failed attempts, Leon landed an excellent slim chance, scoring 7.17. While Kajiy established herself firmly in the lead, Leon and Rosa battled for the second spot to move into the final, almost going trick for trick. The latter landed a hinterberger mobe, scoring a massive 5.93, edging out her rival, who couldn’t quite hold it together on the landings.

The original plan was to run the Women’s Final, but the progressively increasing winds dictated a change in the heat order. Race director, Rui Meira, pushed the Women’s Final to tomorrow and Men’s Round Five proceeded to commence.

Men’s Round Four heats progressed throughout the morning with four riders in each heat. Standouts were a mega unhooked double backroll kiteloop from local rider Duvan X. One of our youngest competitors, 12-year-old Finn Flugel, made it into the quarter-final round, just beating out Carlito Martinez by 1.4 points.

After the first round of eliminations, Men’s Round Five took to the water with 16 competitors battling it out to advance to the semi-final rounds. The wind continued to build throughout the day and by the time the afternoon hit, a solid 25-28 knots was blowing. Every rider was going huge. The wind was strong, with men on 9 meters, sending it to the moon!

In Round Five, Heat One, the crowd went wild for Maxime Chabloz’s seatbelt mobe 5. The judges rewarded his stylish execution with a 7.33. Chabloz ended this heat with a total score of 30.43. Luis Cruz landed a textbook Slim Chance 9 that was the biggest trick of the day, according to GKA judge, Sam Medysky.

The heats became more and more stacked as we progressed through the competition. Riders such as Gianmaria Coccoluto, Valentin Rodriguez, and Manoel Soares gave the crowd on the beach a lot to cheer about.

We will be resuming the competition with a rider’s meeting at 9.00 am (EST) on Saturday March 5th, with an early first possible start at 10.00 am (EST).