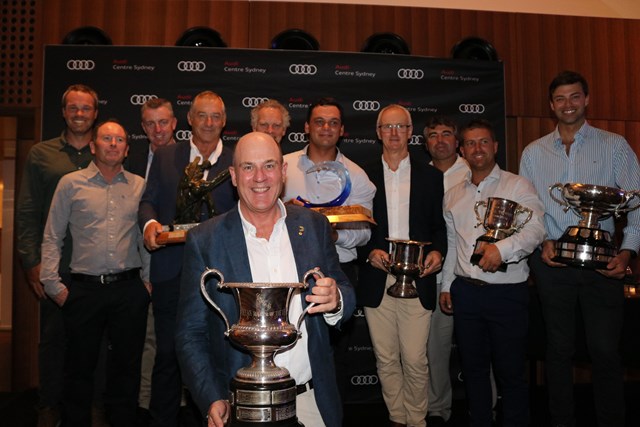 Matt Allen and his Ichi Ban crew were the big winners at the Cruising Yacht Club of Australia’s Ocean Racer of the Year Awards and Audi Centre Sydney Blue Water Pointscore Prizegiving.

“It’s a great credit to my whole team,” Allen said. “We’ve had a mind-blowing year, some really close races.

“Every time we were beaten, we were second, so it was a really consistent performance, which is what you’re looking for in the Audi Centre Sydney Blue Water Pointscore.

“It was great that the boat performed well in all conditions and that’s what we aim for. We don’t focus the boat on being really powerful in one aspect.

“It’s always a great honour to win that award [Ocean Racer of the Year], but it is a reflection of the team’s performance.

“It’s a team that just wants to work really hard together. We’ve got plenty of experience and talent.”

For his role in Ichi Ban’s successful campaign, Will Oxley was named Ocean Racing Navigator of the Year.

Jules Hall and Jan Scholten were named the inaugural Two-Handed Ocean Racers of the Year after a dominant campaign on Jules’ J/99 Disko Trooper_Contender Sailcloth.

The pair won the first two races of the Audi Centre Sydney Blue Water Pointscore in the Two-Handed Division, before finishing third in the Cabbage Tree Island Race and sweeping all divisional handicaps in the 2021 Rolex Sydney Hobart.

“We committed to train hard and push ourselves, but there were so many unknowns. It’s really gratifying to win this award,” Hall said.

“We’ve all made new mates; good friendships and we’ve all been on a journey together. I really hope it attracts a lot of other people in.”

Scholten added: “You share the adventure [with other two-handed crews]. A lot is planned, but there is plenty of stuff that comes new, so we all have stories.

“You challenge yourself with roles on the boat that you wouldn’t previously have done. We all have those things in common and I think that’s why we stick together a bit. We know what the others have gone through and that’s nice.”

“Richard and David have done awesome stuff for youth development, getting young sailors on board for offshore races and showing what it’s like,” he said.

“It’s such a great vibe on the boat. We’re all great mates and everyone loves being out there.
“I was quite surprised when I heard I got this award, but I’m loving it and thank the CYCA and everyone who put me forward for it.”

CYCA Director and owner/skipper of Whisper, David Griffith, is the Ocean Racing Veteran of the Year.

Griffith and Whisper competed in almost all of the CYCA’s offshore races in 2021, starting with the Summer Offshore Series and finishing second overall in the Audi Centre Sydney Blue Water Pointscore.

Alex Seja and Felicity Nelson were crowned Ocean Racing Rookies of the Year following their maiden campaign as owners and co-skippers of the Sydney 36 Supernova.

Alex and Felicity bought the yacht in February 2021 and assembled a crew for the Audi Centre Sydney Blue Water Pointscore.

Supernova finished 13th overall on IRC in the 2021 Rolex Sydney Hobart, which was Nelson’s milestone 25th appearance in the race.

Glenn Stewart was honoured with the Sally Gordon Memorial Trophy as Crew Person of the Year.

Glenn was an integral member of the Midnight Rambler crew throughout 2021 as they enjoyed plenty of success throughout the Tasmanian offshore season and finished seventh overall in the Rolex Sydney Hobart.

He was joined on board Midnight Rambler for the Rolex Sydney Hobart by daughter Anne, who sailed in the race for the first time.

“I’m very happy to have received this award and also to have been nominated by a legend like Ed Psaltis,” Stewart said.

“Individual awards don’t sit particularly comfortably with me, because we’re a tight knit group and we do things as a team, but I appreciate this honour.

“There is a long-formed ethos that Ed has developed over 39 Hobarts. He has a set formula; he sticks to it and he expects a high standard. He can bring a crew together and that’s what has happened here. The simple ethos is ‘go hard or go home’.

“Sailing with your kids is a great thing. I’m very proud of Anne and couldn’t be happier.”
Below is the full list of Ocean Racer of the Year Award winners and results from the 2021/22 Audi Centre Sydney Blue Water Pointscore.