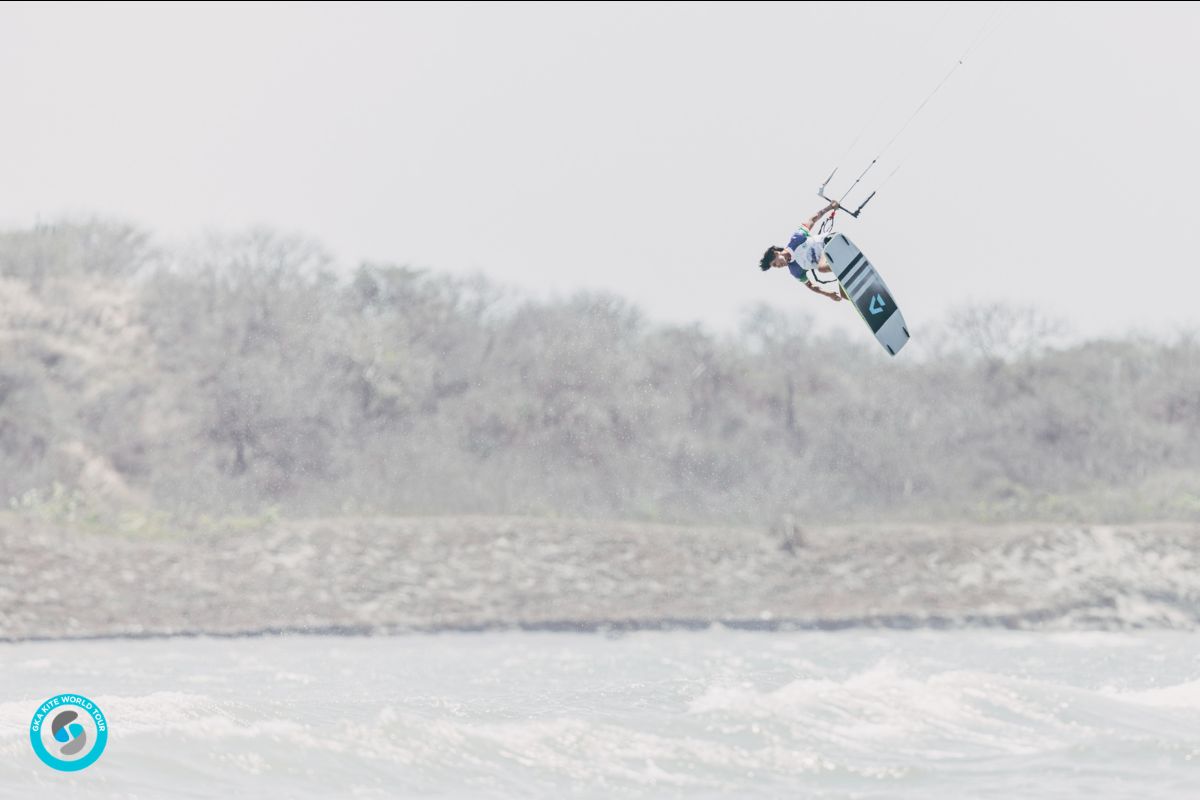 Day 2 of the 2022 GKA Freestyle Kite World Cup Colombia started off with clear, sunny skies and building wind and as riders began to gather for the skippers meeting at 9:00am, you could feel the excitement building.

“It’s a sunny day, the wind is nice and we’re starting with the women. I’m excited,” said veteran and legendary competitor Bruna Kajiya.

Heats progressed quickly throughout the day as the wind continued to build. Conditions were choppy and began to get challenging with gusty wind flowing over the beach. It was a full day of kiteboarding as we ran Women’s Round One and Men’s Round Three.

Although the Women’s field at this event is smaller compared to others, the level of talent is off the charts. Four-time world champion, Mikaili Sol, is already gunning for another world title. Rita Arnaus is feeling strong and has been training on her new gear and Bruna Kajiya is as steady a competitor as ever.

It’s been fascinating to see the level of progression of the women steadily climb. We’ll see if anyone can touch Sol as she pushes the amplitude and technicality of the women higher and higher.

In Women’s heat one, Arnaus won it at the last second over Saumi Cavallo and Kajiya, with a cleanly executed slim chance. Conditions were a bit choppy and all three riders struggled to land consistently.

Women’s heat two was a stacked heat with Spanish rider Claudia Leon landing a clean backside 313 and a slim chance.

Estefania Rosa answered back with a frontside 313 and a Hinterberger mobe. Although the standout of the session was most certainly Mikaili Sol, who showed how consistently she’s been training with an absolutely massive slim chance 5, scoring an 8.03. She also landed a Hinterberger mobe 5 scoring 8.77.

The Men’s heats were full of power and style with many standouts, including Maxime Chabloz and Gianmaria Coccoluto being the only riders to break through the magic 30-point heat score.

Meanwhile, 2019 world champion, Colombian Valentin Rodriguez, suffered an upset, being beaten by fellow countryman Juan Rodriguez after a super close battle. Valentin will ride again in round four, though.

Reigning world champion, Arthur Guillebert from France, fared better, building his heat steadily and doing all he needed to secure safe passage against Daniel Pereira, climaxing with a huge frontside 319 to seal the deal.

We managed to finish the entire Round 3 of the Men’s on day two. Heats of three riders competed with the top rider moving directly into Round Five and the lowest two riders moving into Round Four.