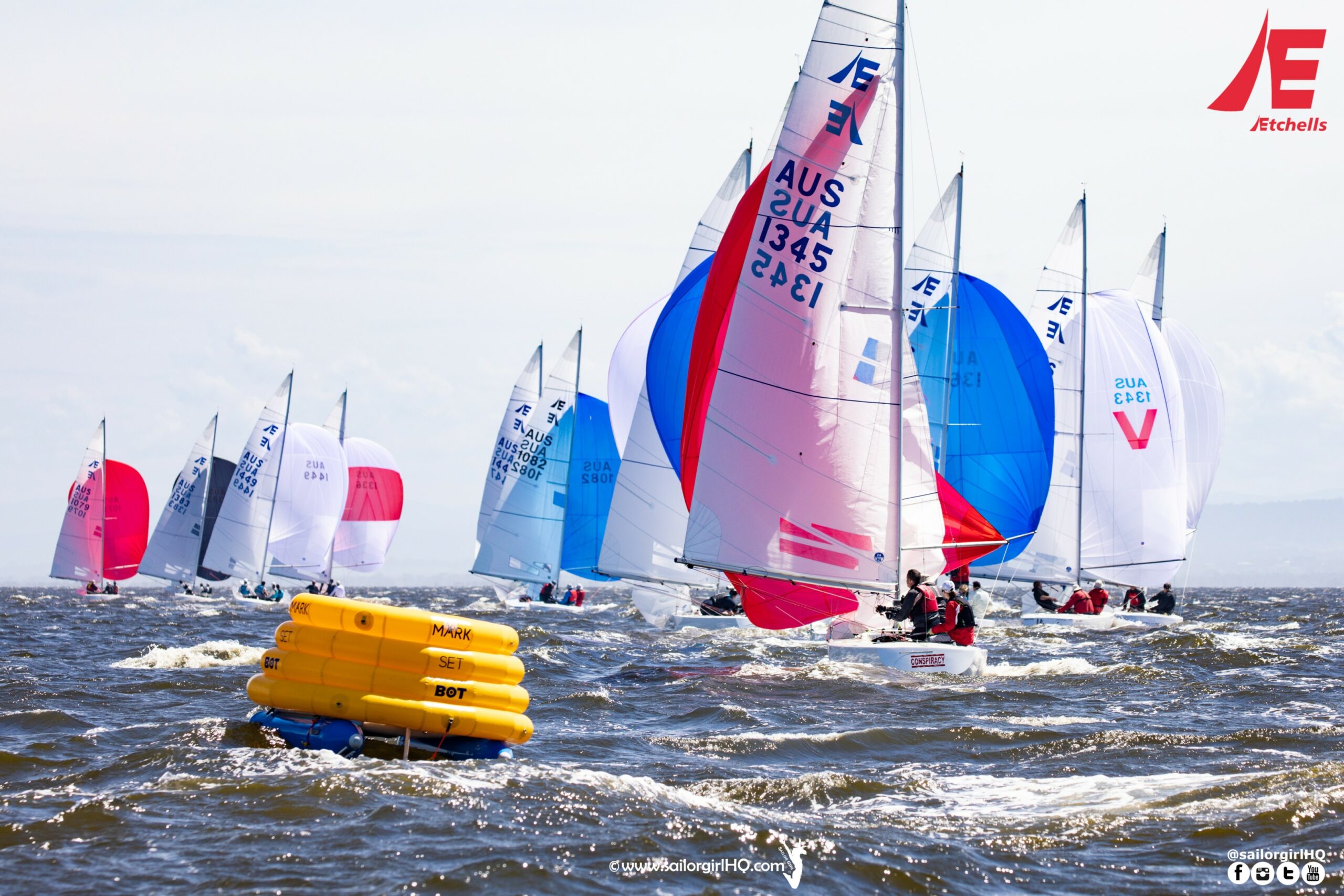 Day two of the Etchells Australian Championship was sailed on Lake King from the Metung Yacht Club on Friday.

Six races have now been held, with races four through six raced in 15-20 knots of easterly. With a drop in play, Chris Hampton/Sam Haines/Cam Miles on Tango have moved into first overall by just one point over Martin Hill’s Lisa Rose , with Mat Belcher/Sean O’Rourke/Julian Plante crewing.

Avalon, skippered by Michael Bellingham with Dean Blatchford and Kyle Doods on crew are in third overall. Kirwan Robb/Rodney Muller/Brett Taylor on Triad are in fourth overall and lead the Grand Masters division.

Tranquility Base still leads the Corinthian fleet. The Archer leads the Youth Division.

Race four started in a 15-knot easterly, with the course set at 085 degrees. Swan Song was called as being over early at the start.

At the top mark, V for Vendetta, sailed by James Bacon/Lallie Leckie/Nigel Jones/Peter Robson were the early leaders, just ahead of Avalon. Lisa Rose was firmly in third position.

At the gate, Avalon took the lead and opted to go out to the left-hand corner and was not headed from there and took her first win of the series. Lisa Rose finished second, which solidified their regatta lead, with Tango posting her worst result of the regatta so far in eighth. Third across the line in race 4 was Thelastone.

For the rest of the day, it was all about Tango, as her crew looked exceptionally powerful in both Races 5 and 6, taking two wins and the regatta lead after dropping their eighth from Race 4. Even though Lisa Rose was boat of the day, posting a 2, 3, 3, she is in second place with a much lower drop meaning no first place.

With three more races to be sailed over the next two days, the Championship is still wide open. With breeze expected from the west for day three, the complete opposite of days one and two, the race track on Lake King is certain to provide a fantastic challenge for the fleet of 28 boats.

This regatta would not be possible without major sponsor King & Heath First National Real Estate, as well as the team of volunteers working out of the Metung Yacht Club, including Race Management headed by Ross Wilson and backed up by his brother Kevin Wilson.

Media sponsor for this event, and a number of other Etchells Australia events this year is a major supporter of the class, HillPDA. Thanks to our other photographers who are onsite for the event, McPherson Photography and Lenka Senkyrikova.

In Metung this weekend are the new Mark Set Bot buoys. This ground breaking technology is being showcased as a sustainable and more efficient method for laying sailing marks. No anchors are required as the electrically motorised inflatable marks are plotted to a GPS coordinate.