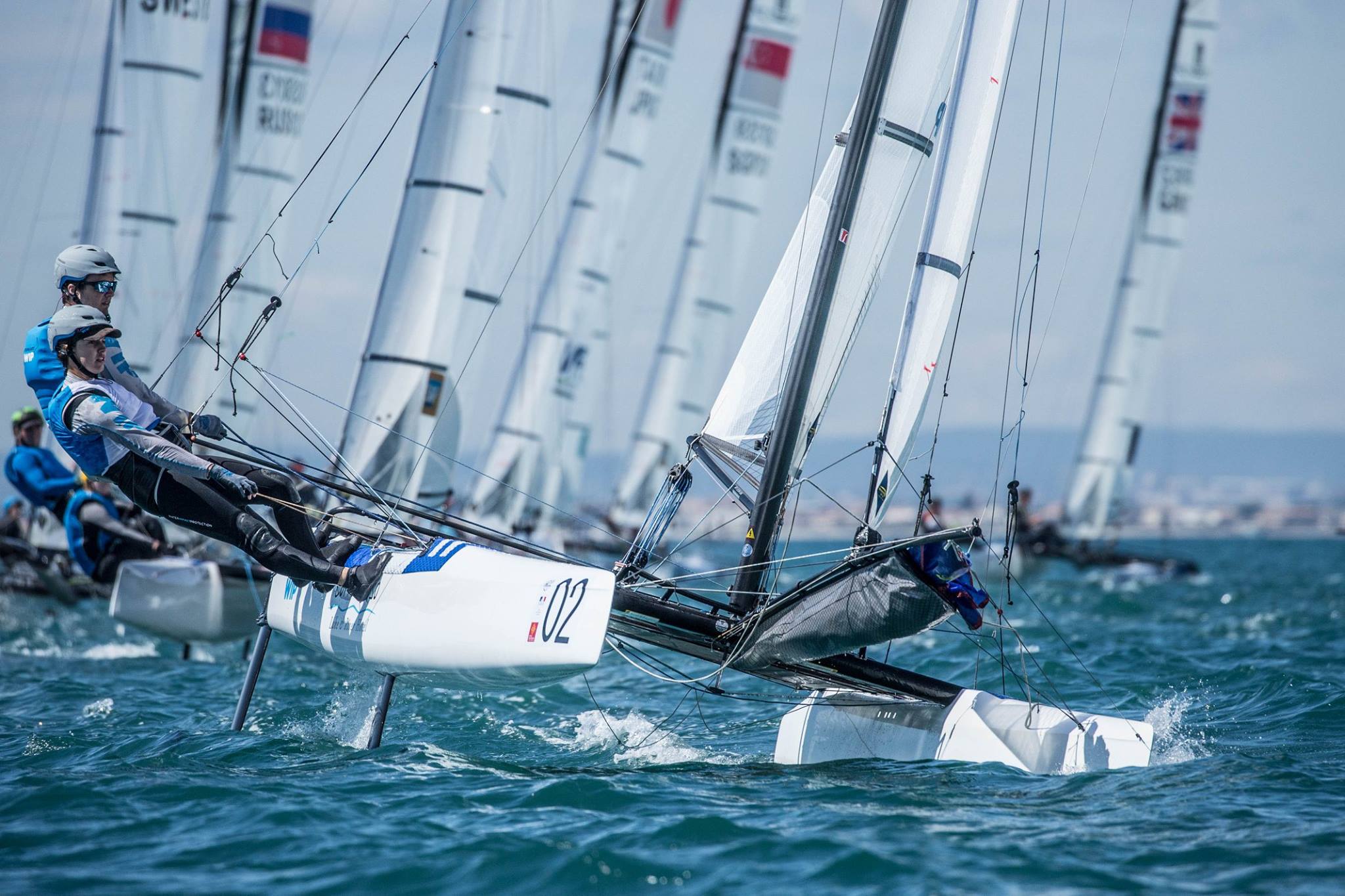 As if to answer the question whether the younger generation can make a big impression at these first ever foiling Nacra World Championships, foiling kiteboarder and 49er racer Gibbs, 21, paired with Rio Olympian Chafee, 25, had opened with an opening second and two first places from their 24 strong Blue fleet group and were credited with the provisional early lead of the championship. But they were subsequently protested and penalised for sailing with the rubber bushes at the top of the foils removed, contrary to the International Jury’s interpretation of the measurement rules.

The young Americans, training partners of injured Bora Gulari and Helena Scutt who – Scutt reported after the hearing – had already trained with the bushes removed in order to preserve maximum strength in the head area rather than seek a performance gain were it to allow the foil to drop lower.

“This is not about any performance gain this is about the strength in that part of the board.” Scutt emphasised after the hearing. “We had the boards not once, but twice, to measurement like that and so we considered it was fine.” Added USA coach David Howlett.

With the young American pair receiving a 50 per cent place penalty for each of their races, John Gimson and Anna Burnett now lead a British Sailing Team 1-2 at the top of the World Championship standings with New Zealand’s Rio Olympians Gemma Jones and Jason Saunders in third. While several key groups have been working up on Lake Garda and here in La Grande Motte for example, the five strong British Nacra 17 squad have been training hard together as a unit on their native Olympic waters off Weymouth and Portland. They showed well at the first foiling Nacra 17 event, the European Championship in Kiel where British Sailing Team crews took three of the top six places.

Australian Olympic silver medallists Jason Waterhouse and Lisa Darmanin finished the day in 15th with a scoreline of 4, 9, 12.

Helm Gimson outlines the ongoing British squad philosophy, “The GBR squad, all five British boats, ourselves Ben Saxton, Tom Phipps, Rupert White and Chris Rashley have all been training together in Weymouth which has been good. We did a lot of practice sailing with the kite up upwind and then that got banned the day before the event and so we have been trying to remember how to sail ‘old style’. The training as a squad has been great, everyone has their different strengths, now we need to learn to race.”

Fifth in Kiel, Gimson, added, “We picked up our boat the day before the Europeans and then built it the day before and then raced. But we had spent a lot of time in Bermuda with Artemis sailing the foiling Nacra 20s. It was just about converting that to the platform we have now.” “Some guys are making the upwind foiling work, Ben (Saxton and Katie Dabson) are making that work reasonably, the Kiwis have a nice mode as have the Italians but you need a lot of space to do that. It is OK on tuning runs but on the race course it is a different story.”

Consistency in the light conditions on the opening day was not easy. Although the left on both course areas appeared to yield some profit in additional wind pressure there was some concern that the sea breeze might move to the right. First blood on the Blue course went to Spain’s Iker Martinez and Olga Maslivets who lead to the first top mark ahead of Gibbs and Chaffee, the double Olympic medallist and Maslivets holding on to their early margin to the finish line. On the corresponding Yellow area Italy’s Lorenzo Bressani and Cecilia Zorzi – who, like Martinez missed out on Rio selection – also started out with a Race 1 victory.

But Martinez and Maslivets struggled in the second race, rounded third from last, and had to fight back to a mid fleet 12th, going 1,12,9 for the day to lie 21st just behind Rio gold winners Lange and Carannza Saroli. Recently crowned European Champions Ruggero Tita and Caterina Banti of Italy started modestly with two midfleet results and a second place but the Danish winners of the 2018 Sailing World Championships Aarhus Test Regatta, Lin Ea Cenholt and Christian Peter Lubeck came back after a modest 12th place opener to win both their subsequent races.

Helm Cenholt commented, “For us we are really happy with our speed on the downwinds and having a lot of fun testing the boat and pushing it and seeing how we can make it a little faster. We might be falling off the foils now and then but it is all about the learning process. We got the boat on the 20th of June and so we did the Europeans and Aarhus. In Aarhus we were just consistent, we did not win a single race but our worst race was a fifth. Today we learned a lot, especially towards the goals which are finding the best settings upwind. Today I think we maybe got a little closer to a faster mode but also we are developing our settings- knowing how powerful the sails need to be set up for this boat.” Racing will start at 1100hrs Wednesday with a forecast for NW’ly breeze in the morning.

Results can be found here : http://nacra17.org/events/2017-world-championship/