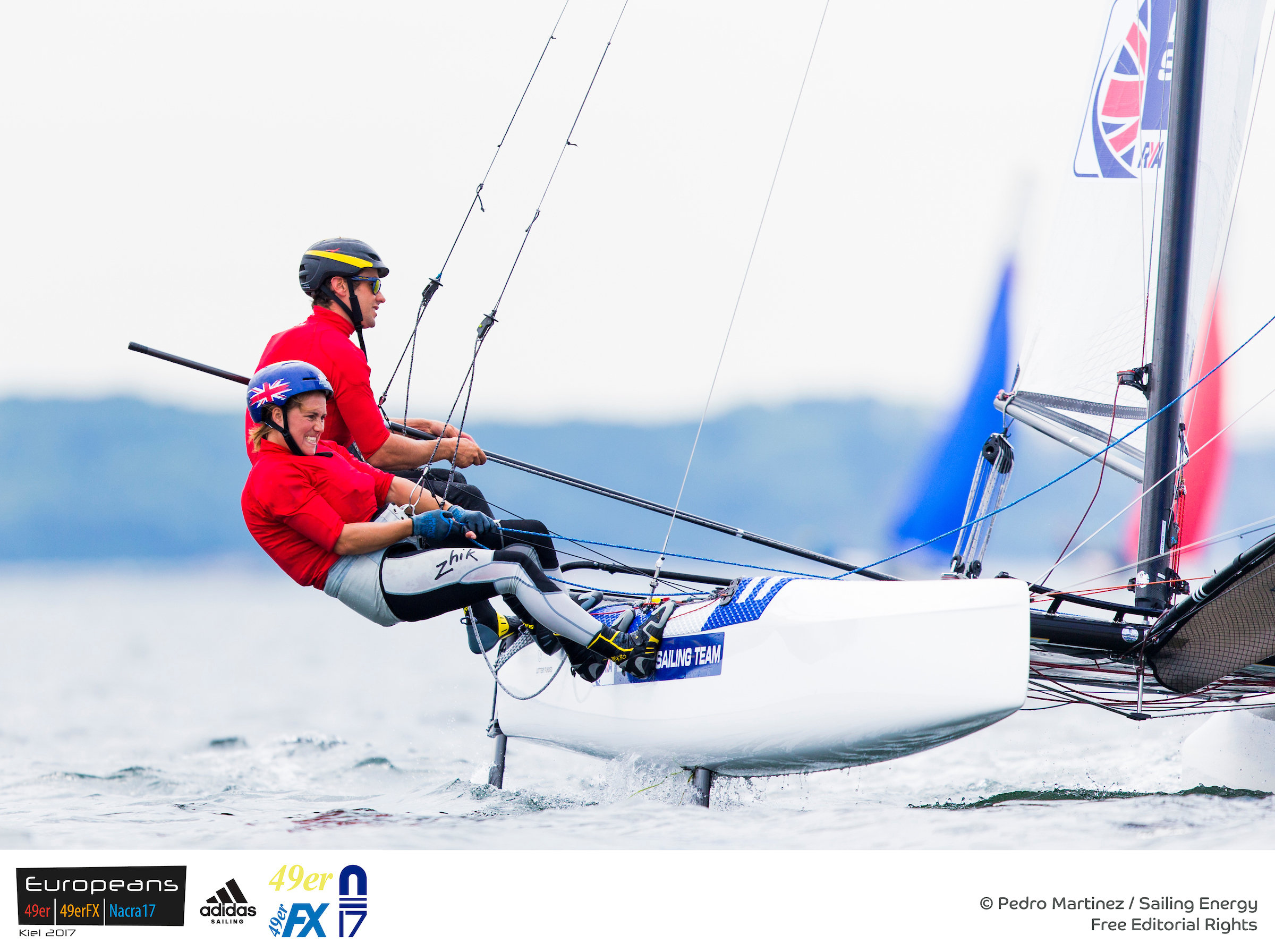 High pressure over the North Sea meant entirely new challenges for the 49erFX, 49er, and Nacra 17 fleets as the European Championship entered its third day today.

A short postponement to let the wind fill in gave way to a full day of racing, with the 49erFX and Nacra 17’s getting three races in while the 49ers finished their Qualifying series with two light air contests.

The 49erFXs saw huge changes in position in the light wind, with the Netherlands’ Annemiek BEKKERING and Cecile JANMAAT surging ahead of overnight leaders Jena HANSEN and Katja IVERSEN (DEN) by a full 7 points. Local favorites Tina LUTZ and Susann BEUCKE won the day with a 1,1,2 scoreline, leveraging their local knowledge of strong currents and the tricky breeze to vault ahead to 3rd place.

With the top 20 in the 49er and 49erFX fleets advancing to the Gold Fleet after today’s action, one mistake could change the entire face of their regatta – as US Sailing Team representatives Steph ROBLE and Maggie SHEA found out after getting caught on the top mark in the first race of the day – for over a minute.

“We knew about the current but got stacked up on the anchor line anyway,” said Shea, disappointed more in the team’s next result than the tough rounding. “We bounced right back after that one, with a great start and maybe a 5th at the finish – until we saw our names on the UFD board and we knew our Gold Fleet hopes were over,” said Shea.

Roble added that despite their disappointment, there is plenty to accomplish in the final half of the Championship. “As a new team, we need to use every opportunity we have to get better, and with such a deep fleet, there is plenty of great competition well into the silver fleet,” said the former US Yachtswoman of the Year.

Unlike Shea and Roble, Singapore’s Griselda KHNG and Olivia “Livy” CHEN turned it two strong races today – a 4 and a 1 – but a UFD penalty ended their Gold hopes as well. “We’re only together a short time, this is Livy’s first regatta in the FX and she just started sailing last year, so we’re really happy with our performance so far,” said Khng. “We’re bummed we missed the gold fleet, but you never learn if you never make mistakes.”

Australia's leading crew is Tess Lloyd and Eliza Solly, who hold 11th place. Caitlin Elks and Hayley Clark are 17th and need to remain in the top 20 to qualify for Gold fleet. In 27th place, Haylee Outteridge and Nina Curtis will be in Silver fleet along with Amelia Stabback and Ella Clark, who are 40th.

Having held the lead since Day 1, the UK’s Dylan FLETCHER-SCOTT and Stuart BITHELL continued to hold on to a slim lead over fellow GBR squadmates James PETERS and Fynn STERRITT and surging Western Australians David GILMOUR and Joel TURNER, who sit tied after 9 races.

Hailing from one of sailing’s windiest venues in Fremantle, Gilmour said he was surprised at their performance in the light air. “We’re confident in our boatspeed in the breeze but we were having issues during training in the light air, so we’re definitely pleased to have somehow solved the problem today,” said Gilmour.

The Aussie duo have the distinction of being the only boat in the 95-boat 49er field to have scored only single-digit finishes at this point in the regatta. Gilmour had no real answer when questioned about this exceptional consistency. “It’s better to be lucky than good!” he said. You can watch Gilmour and Turner talk about their campaign during the replay of Day 3’s Adidas Morning Show here.

Perennial standout Diego BOTIN and Iago LOPEZ (ESP) struggled through the qualifying rounds of the regatta after picking up a dreaded UFD disqualification in the first race of the European Championship. “With so few points separating dozens of places, picking up that result so early meant a very conservative plan and an incredibly stressful few days,” said Botin. Conservative starts mean lots of deep first beats and mid-pack mark roundings, something Botin said they had to work hard to overcome. “The key always seems to be speed and simplicity, but sailing simple can be incredibly complicated,” he said mysteriously.

Legendary Brazilian sailor Robert SCHEIDT sits well outside of the Gold Fleet along with young crew Gabriel Borges. The five-time Olympic Medalist sits in 43rd place having sailed a 49er for the first time a few months ago.

“I love sailing, and I love a challenge, so the 49er was a perfect boat for me,” said Scheidt, who said his age (44) makes things a bit tougher than when he first visited Kiel more than 20 years ago. ”You’re only as old as you think you are, and if you sail with and against young guys, push yourself hard, and have a goal and a challenge to keep yourself motivated, that’s the key to getting better and having fun,” he said. No one who knows Scheidt’s history will count him out…

While the skiff fleets move into gold/silver/bronze format tomorrow, the smaller Nacra 17 fleet continues with the more standard regatta format after another 3-race day. The light conditions meant the entire fleet could deploy a secret weapon that no team wanted to reveal too soon: Upwind spinnaker sailing. “

On the second day of their first-ever regatta, the new foiling Nacra 17 fleet found an entirely new way to power their boats upwind – by using the spinnaker.

“We’d all tested the kites upwind in the light air, and most of us expected it to pay, but until a few seconds before the start it was business as usual,” said Australian Sailing Team coach Darren Bundock, helming for injured silver medalist Jason Waterhouse. “Bundy” said the entire fleet was waiting for something to happen when New Zealand helm Gemma Jones popped her kite right on the start line. “Ten seconds later the entire fleet had their kites up, and there was no doubt it was the way to go,” said Bundock.

Bundock and Lisa Darmanin are in 14th place.