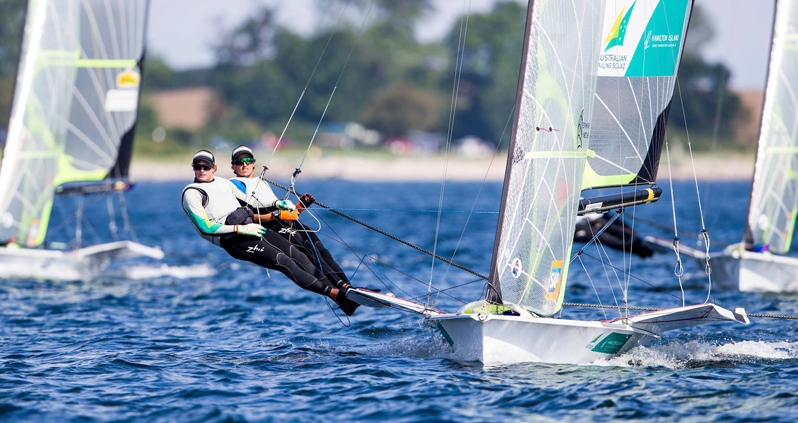 High-flying 49er team David Gilmour and Joel Turner will use Australia’s premier dinghy boat regattas, Sail Sydney and Sail Melbourne, to push the limits of their fledgling partnership after a year of somewhat unexpected success.

The Australian Sailing Team duo’s individual credentials suggest great potential. But Turner’s decision to buck the pattern of crew progressing to skippering raised questions about how the pair would work as a unit. Those concerns were allayed with a string of good results in 2017, including victory at Kiel Week in June and a second placing at the 49er European Championship in July, as well as strong returns on the World Match Racing Tour.

“After skippering for a few years I came to the realisation that there are more good skippers in Australia than there are crews,” Turner said. “There was a deficit in good crews here, so I thought to try to solve that problem myself. Dave and I spoke for a while and we both decided that we would work well as a team together.

“Dave’s sailed the 49er for a little bit longer than I have. So I think it was always going to be the case that he would continue to steer and I was pretty keen to give crewing a go. It seems to be going pretty well so far.”

New Zealand teams, Josh Porebski and Trent Rippey, and Logan Beck and Oscar Gunn, as well as Australian team Will and Sam Phillips, are among the teams to watch at the upcoming regattas. However, the focus, Turner said, would be on their own sailing synergy.

“We’ve only been sailing the 49er together for just over 12 months, I’m still learning how to do it as a crew and we’re still working very hard in training to develop our skills as a team,” the 22-year-old said. “We’ll definitely have pressure on ourselves to try and win the events. You always want to win. But at the same time, we’ll be trying new things and trying to go faster each day.”

It’s a similar case for 49erFX team Amelia Stabback and Ella Clark, who have learnt plenty in the short time they have been working together and are set for a test against New Zealand’s Rio Olympics silver medallists Alex Maloney and Molly Meech.

“We competed against them at the Worlds, but weren’t too close to them there,” Stabback said. “It was just a great experience to be part of a field that strong. It was really cool to see the calibre of the fleet.”

The local regattas will also feature rising stars Natasha Bryant and Annie Wilmot, who were recently named Female Sailor of the Year at the Australian Sailing Awards.

“We’ve been training with them a bit. But I think Ella and I are pretty driven regardless of other teams,” Stabback said. “We’ve got our own goals and we’re pretty motivated to do what we think we need to do to get better.”