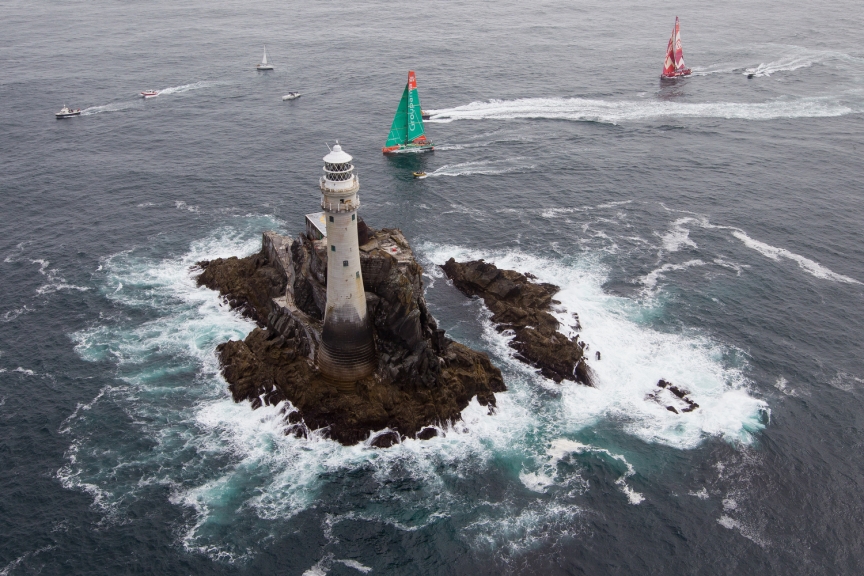 26/04/2017
August's Rolex Fastnet Race remains on track for a record-sized fleet. Currently 390 boats are entered: 338 competing for the main IRC handicap prize; the remainder racing for their own trophies in the Class40, IMOCA 60, Volvo Ocean 65 and Multihull grand prix classes.
This line-up makes the Rolex Fastnet Race the world's largest offshore race in terms of competitor numbers. Its entries are the most diverse, ranging from maxi-multihulls to the world's fastest monohulls, including those that compete in the fully crewed and singlehanded round the world races, to the racer cruisers and cruiser racers that form the majority of the IRC classes.
The fleet is also the most international. At the present tally, boats from 25 nations will be heading west down the Solent from Cowes on start day, Sunday 6th August.
As expected, the largest entry is from the UK with 58% of the fleet, but this means that 42%, or a whopping 164 boats, will have come from overseas.
France has dominated Rolex Fastnet Race results in both the IRC and non-IRC fleets in recent years and once again is back with a vengeance with the second largest entry, representing 13% of the fleet, followed by the Netherlands, Germany and Ireland with 7, 5 and 4% respectively.
Several teams will be making the journey from the furthest corners of the globe especially for the Rolex Fastnet Race. One of the most impressive efforts is from the Australian trio. This includes Finnish former Whitbread Round the World Race skipper Ludde Ingvall with his heavily remodelled Rolex Sydney Hobart Race line honours-winning maxi, CQS (ex-Nicorette). In her latest incarnation, this boat has been lengthened to 100ft and is futuristic-looking with a low volume reverse sheer bow, deck wings to increase her shroud base and a Dynamic Stability Systems lateral foil arrangement.
Also from down under, Rupert Henry's Judel-Vrolijk 62, Chinese Whisper will be back on familiar waters: She was previously Sir Peter Ogden's all-black 62ft Mini Maxi, Jethou. She is joined one of the most famous 'classic' maxis, Kialoa II, the elegant 73ft aluminium S&S design, enthusiastically raced by American Jim Kilroy from 1963-1973, when she won both the Transpac and Sydney Hobart races. She is now campaigned by Patrick Broughton.
As usual there are strong entries from the USA led by George David's Rambler 88 and Privateer, Ron O'Hanley's Cookson 50 competing a decade on from when Ger O'Rourke's sistership, Chieftain, won overall.
This year's race has its largest ever Asian entry with boats coming from Korea, Japan and China.
In the Class40, Japan's Hiroshi Kitada returns to the UK with his Pogo40 S3, Kiho, having competed in the Transat bakerly and Quebec-St Malo races last year.
From China is Ark323, skippered by Li Yun. This Botin & Carkeek-designed TP52 (ex-Sled/Warpath), in 2015 became mainland China's first entry with an all-Chinese crew in the Rolex Sydney Hobart. The boat is now making the long haul to the UK to compete in another of the internationally renowned 'classic 600 milers'.
Korea's first entry in the Rolex Fastnet Race comes in the form of the GP42 Sonic. Campaigned by Andrew Rho, Sonic has been one of the most competitive teams in Korea's burgeoning big boat racing scene.
Russia is becoming an increasingly major player in international yacht racing and will be fielding at least three entries including Pjotr Lezhnin Racing in the Class40, while in the IRC fleet is Sergei Zhedik's Sunfast 3600 Voyager and Igor Rytov's JPK 10.80 Bogatyr. Rytov competed in the last Rolex Fastnet Race as a crewman and, according to the Bogatyr team's Ivan Sharapov “he thought there was room for improvement, so he is doing it again on his own terms with a crew he's selected.” Rytov acquired a JPK 10.80 following the victory of Géry Trentesaux's sistership Courrier Du Leon, in the last Rolex Fastnet Race.
Following on from its MOD70 entry in previous years, Oman Sail returns to the Rolex Fastnet Race this time in the Class40 fleet. Once again the crew will be led by French round the world sailor Sidney Gavignet who is spending this season coaching up top Omani sailor Fahad al Hasni in shorthanded offshore racing.
From the eastern Mediterranean, the race has a Turkish entry in Yigit Eroglu's First 35 F35 Express, while following the successful debut with Team Israel in last year's Brewin Dolphin Commodores' Cup, Omer Brand is returning with another Israeli crew, this time aboard Richard Loftus' Swan 65 and long serving competitor, Desperado. Brand and his crew will have to get used to some ancient Desperado traditions such as the black tie dinner at the Fastnet Rock not to mention the team's pet gorilla, Joe Powder.
“It is brilliant to see such a diverse fleet with huge international representation,” says RORC CEO, Eddie Warden Owen.”The Rolex Fastnet race is recognised worldwide as one of the most challenging 600 mile offshore races. It combines the tidal challenges of the Channel, with headlands to negotiate on the English South Coast, with open ocean racing in the Celtic Sea going to and from that iconic landmark, the Fastnet lighthouse off southern Ireland. Add to these navigational challenges typically unpredictable English weather which tests the seamanship and stamina of all the crew. This is why serious offshore sailors from all over the world want to take part.”