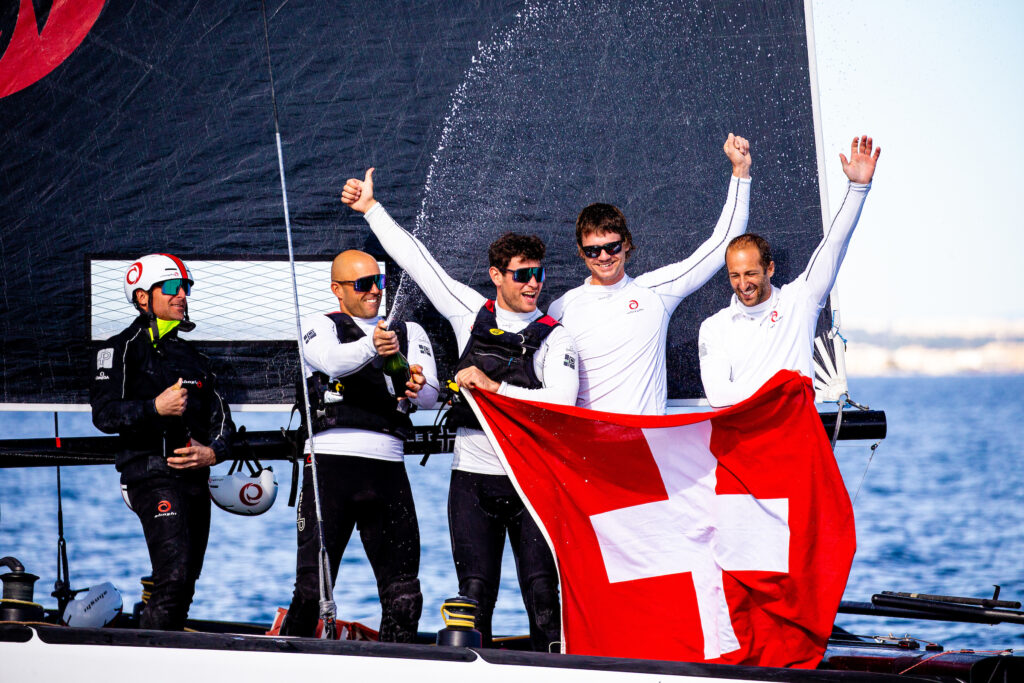 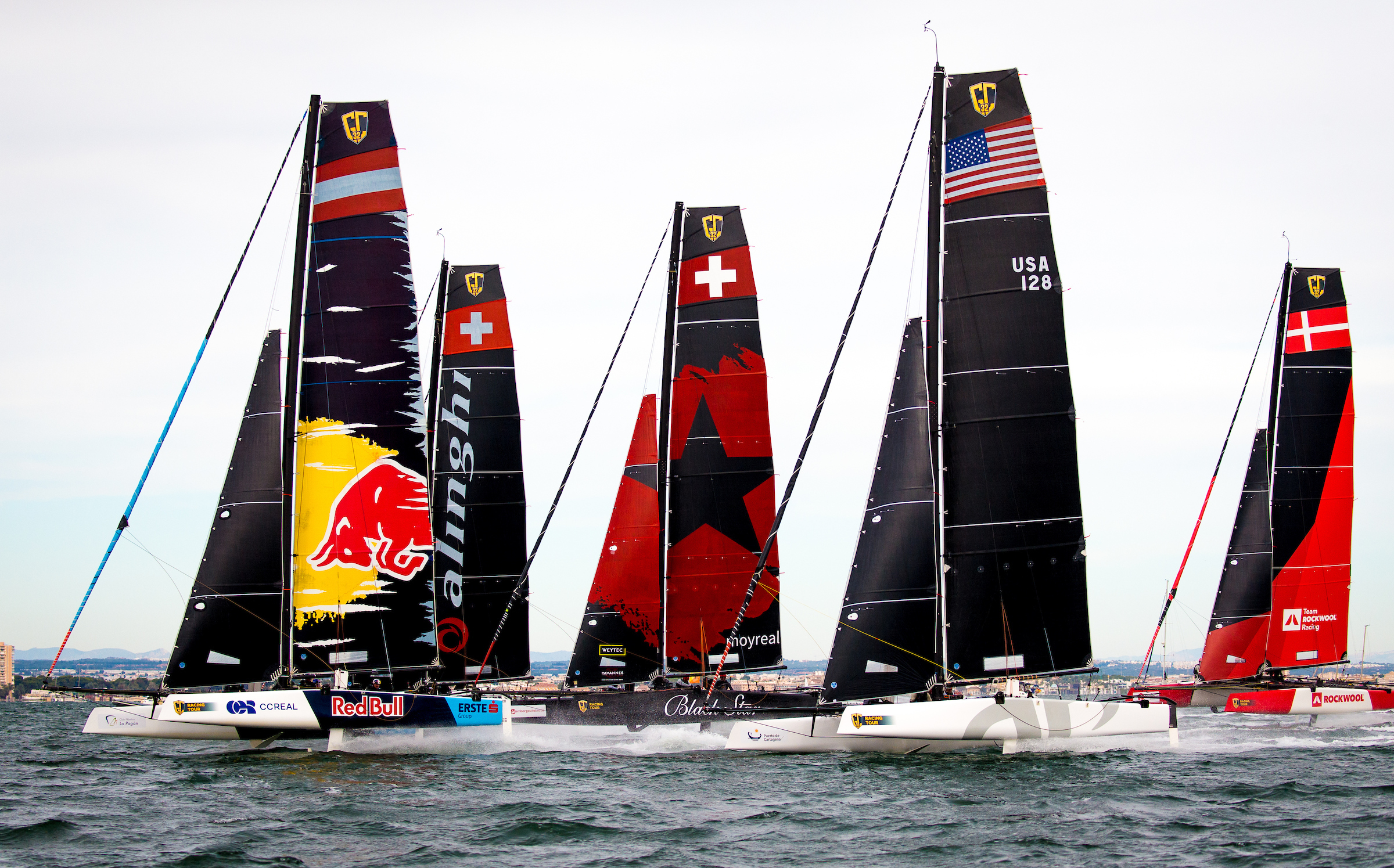 After a blistering five race day on Saturday, the conditions on Murcia’s inland sea for the final day proved challenging with less wind than forecast. Nonetheless one race was held in a 6-7 knot northwesterly.

In this it was finally the turn of Taylor Canfield and his crew on Jason Carroll’s Argo to put in a performance worthy of a former World Match Racing Tour winner and America’s Cup skipper-in-waiting. On board were Australians Ted Hackney and Mark Spearman.

Argo led for the first lap but it was Christian’s Zuerrer’s Black Star that pulled ahead coming into the second top mark rounding to take the bullet with Red Bull Sailing Team and Alinghi second and third respectively.

A second race was held and in this, devastatingly, Black Star Sailing Team was within one boat length of claiming her second consecutive bullet when the 35 minute maximum time limit for a GC32 race (under class rules) was reached and the race had to be abandoned. After a wait to see if the wind would return, the race committee hoisted the AP over A, marking the end of the event and announcing Alinghi’s victory.

“I am really happy – it was good to end the season like this,” said Arnaud Psarofaghis, the Swiss team’s helmsman, who sailed this season with Bryan Mettraux, Nicolas Charbonnier, Yves Detrey and Timothe Lapauw.

“The main goal was to win the season and this event as well. We also almost had a perfect season, winning all the events, but with Roman [Hagara] and Red Bull winning the World Championship. Here, everyone was very competitive and we had a great battle, especially with Red Bull and Black Star, every day. It was really interesting and enjoyable.

“In the end, the thing that helps us a lot is our consistency, and we can come back from a bad position. We are patient and we just wait for the right time to make a move. That is the strength of the team.”

In this shortened season, Alinghi won three of the four events and narrowly missed out on defending its GC32 World Championship title due to a technical failure on the last leg of the last race. Alinghi also won the last season for the GC32 Racing Tour in 2019, their first season on the foiling catamaran circuit, coming straight from overall victory in the last season of the Extreme Sailing Series the year before.

It was a big moment too today for Red Bull Sailing Team’s double Olympic Tornado gold medalists Roman Hagara and Hans-Peter Steinacher for whom this was their last regatta. “I am a little bit sad, but we knew that this would happen,” admitted Hagara, whose team finished the GC32 Mar Menor Cup third overall and the season second, five adrift of Alinghi. “During this season we had really good moments, especially winning the Worlds in Villasimius which was for us a highlight in the GC32.”

Red Bull has backed the Austrian duo since 1993 during their Olympic campaigns, the Extreme Sailing Seires and on to today. Many from the company were in Mar Menor to pay homage to two of Austria’s most successful sportsmen. Among them were Thomas Ueberall, Head of Red Bull Motorsports and Bernhard Scheiflinger, Red Bull’s Head of International Athlete & Event Marketing, both of whom raced on board today as part of the GC32’s corporate guest program.

“This event was fun,” said Maris. “The conditions here were up and down, pretty tricky. Yesterday was just perfect. I think we ought to come back, but earlier perhaps. The flat water, the people, the organisation – everything is good.”

Maris remains hugely enthusiastic about the GC32 as an exciting racing machine for owner-drivers. “The GC32 is the best boat you can get for your money. The fun is incredible. The boat is both simple and very fast, it is engaging and it is the cheapest by far of the flying boats at the moment to both buy and run.

“You know there will be competition. The boats are reliable. Everyone knows how to use them, so it is basically all fun. The GC32 is the best.”

Taking over Argo for this event, was Taylor Canfield and his crew. Despite being highly accomplished in other catamarans, they struggled this week in the 32ft flying catamaran.

“A lot of the conditions were at the extremes which made it really difficult and these boats are very unforgiving,” said Canfield. “It is tough for us to just hop in with a new team, some of whom haven’t sailed the boat and myself having not done this in a while. It is noticeable how well polished the other teams are.”

The GC32 Racing Tour resumes in 2022 with a full five event schedule to be announced in the next weeks along with an enlarged fleet.

Christian Scherrer, manager of the GC32 Racing Tour said: “Despite the difficult circumstances with the pandemic, we had four successful events this season and a worthy winner in Alinghi. I would like to thank all of the teams, partners and venues for trusting in us. We look forward to seeing you all in 2022.”