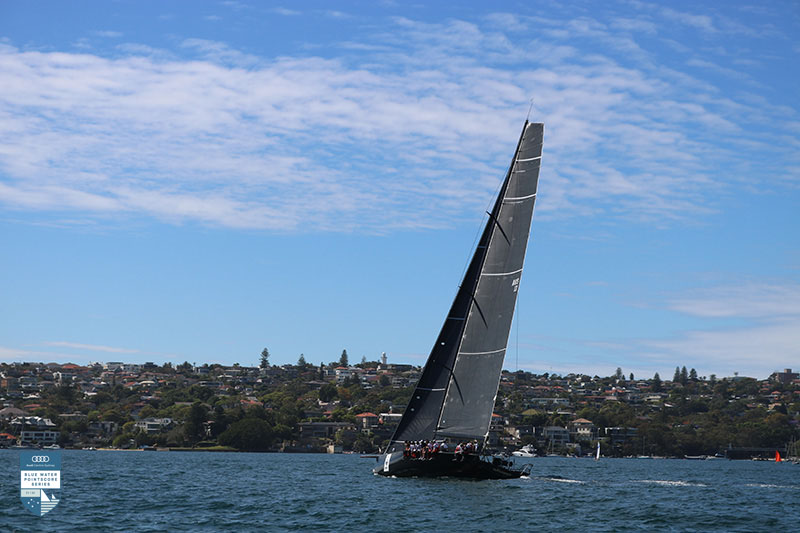 David Griffith's JV62 Whisper leads the way in what is shaping up to be an exciting Audi Centre Sydney Blue Water Pointscore. Pic - CYCA

A fleet of 40 boats was on the start line in Sydney Harbour on Saturday 6 November, greeted by a clear sky and a 10-12 knot freshening breeze clocking NNE to NE.

Whisper was first out of the Heads and hit speeds of 16 knots to slowly pull clear of Matt Allen’s Botin 52 Ichi Ban and the chasing pack of TP52s.

She averaged 9.5 knots in varying conditions, crossing the line in a time of 9 hours, 28 minutes and 30 seconds.

Griffith is pleased to see the continued progress of his JV62.

“We had a wonderful run down the coast,” he said. “The boat is totally different to when I bought it a couple of years ago – new keel, longer bowsprit, all sorts of new sails and great people.

“I think we’ve transformed the boat from a point where, a couple of years ago, we couldn’t beat the TP52s to Flinders Islet, but this time we were in front of them and holding our own.

“With a lot of talented crew, we got home. It was a pretty good day all around.”

This was the second consecutive line honours win for Griffith and Whisper in the Flinders Islet Race, having edged out No Limit in a close battle in the 2019 edition (the 2020 race was cancelled due to COVID-19). Whisper also claimed ORCi honours.

Ichi Ban was second across the line and second overall, less than two minutes away on corrected time from backing up her 2019 overall win.

Seb Bohm, owner/skipper of Smuggler said: “It was great to be out there again. The boat was very well prepared.

“We had a great downwind run, then it was a bit of a bash back, but we kept up with the big boys.

“We’re very pleased with the result, we loved being out there again.”

After more than 17 hours of racing, the battle for line honours in the Two-Handed Division came down to just two minutes.

It was 0303hrs when Salt Shaker crossed the line, with Disko Trooper_Contender Sailcloth just over two minutes behind.

Disko Trooper stayed close enough to claim the overall win on IRC, ahead of another J99, Rum Rebellion (Shane Connelly and Graeme Dunlop).

Peter Franki, owner/skipper of Salt Shaker, was pleased to be part of a competitive race.

“We got a pretty good start, we got out of the Harbour ok,” he said.

“Disko Trooper was in front of us at that stage and they were our main challenger, but we had a lovely sail down to Flinders Islet.

“It was a nice sail back up in varied conditions – the maximum wind speed we had was around 25 knots and it was mostly NNE.

“But I had a great co-pilot, Drew Jones, and the competition was keen but very friendly. It’s great to see so many people embracing this new dimension to sailing.”

The Bird Island Race on Saturday 13 November will be the second race of the Audi Centre Sydney Blue Water Pointscore.

For the full results, see: https://bwps.cycaracing.com/Standings?categoryId=744&raceId=153&seriesId=11