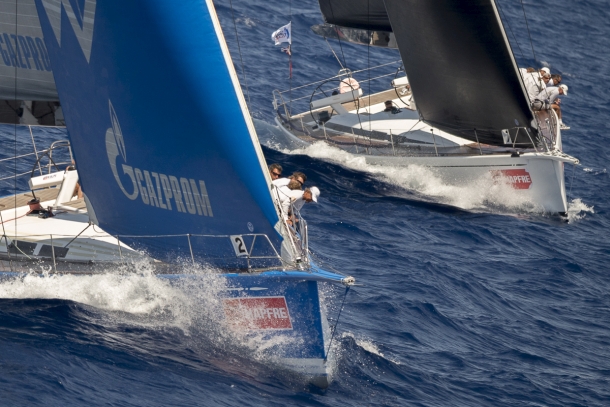 The 2015 Gazprom Swan 60 Class circuit will run from April through to the end of September across Europe and Russia for all Swan 60 and Swan 601 yachts.  The circuit will be sailed as a series of individual events organised by ClubSwan's Racing Office based in Florence.

The five event series will start in Palma, Spain at the end of April in conjunction with Palma Vela, the ten boat fleet will then head to Scarlino, Italy in May for the 3rd Gazprom Swan 60 World Championship.  In June there is the world renowned Giraglia Rolex Cup racing from St Tropez to Genoa. The racing then returns to the wonderful Spanish waters of Palma during the first week in August to enjoy inshore competition during Copa del Rey MAPFRE.

The grand finale, on the 20th September, is the start of the Nord Stream Race this year in Flensburg, Germany. This edition will be non-stop 800 nautical mile race across the Baltic to finish in Russian waters at Saint Petersburg.  The 2015 circuit champion will then be honoured in Saint Petersburg on September 26th at the end of season prize giving.

Vladimir Liubomirov, Gazprom Swan 60 Class President, is confident in the continued growth of the Class and the varied one design racing for the 2015 calendar.  “The Gazprom Swan 60 fleet has grown over the last 12 months and we now have a diverse mix of American, Russian, Chinese and European owners.  The appeal of the ten boat class continues to grow, along with its quality racing circuit.  We are confident that this year’s circuit will deliver excellent racing and we welcome the newly delivered American Swan 60 to our fleet.  The class management is successfully continuing to develop this very high profile one design international racing class”

Class rules have been tightened to place the emphasis even further on the crews' tactical prowess.  Restrictions in sail and crew numbers combined with limitations on sail construction will contain costs for the owners in line with the vision and objectives for the class since its inception.