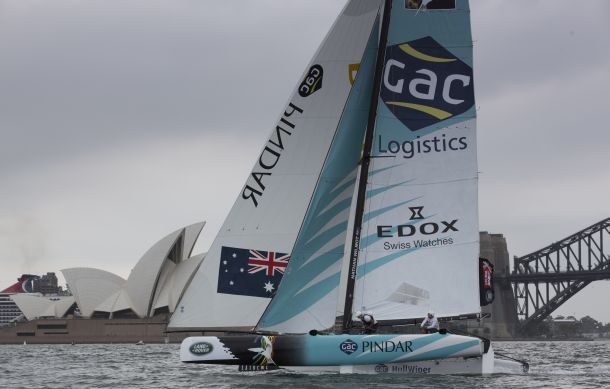 The Extreme 40 skippers and sailors presented today to the media and public at the Düsseldorf Boat Show confirm once again the very high calibre of competitors for the season ahead. The commercial and competitive appeal of the original stadium sailing circuit shows no sign of abating.

“The Series is now firmly established in the arena of world class professional sailing, and we have built that reputation by continually attracting some of the very best sailors in the world, supported by global brands, in iconic and attractive venues – competing annually and on a global scale,” commented Mark Turner, Executive Chairman of OC Sport, the organisation behind the Series. “And whilst the event has never changed its core DNA – racing in a stadium environment where exciting sailing is brought right to the audience – there remains a great deal to do. We must continue to innovate, to break new ground, change people’s perceptions of our sport, find new ways to share it and engage with new audiences around the world. That’s our ongoing challenge.”

The award-winning and ‘ISAF Special Event’ world tour is only made possible by the continued support of its partners, host venues and teams. Mark Cameron, Jaguar Land Rover Global Brand Experience Director commented: “Racing in the Extreme Sailing Series is fast and furious and watching some of the best sailors in the world battling it out in such challenging environments makes for a fantastic spectacle. The boats are quick and tough, just like our vehicles and must perform whatever the conditions. We look forward to watching the inevitable high octane thrills and spills of the 2015 Series with great anticipation.”

Eight Teams Representing Seven Nations
The competition on the water is always fierce, action-packed and down to the wire, and there’s a reason for that. The fleet is made up of many of the world’s leading sailors – Olympic Champions, World Champions and America’s Cup veterans – these sailors are at the top of their game. The 2015 season will see some new blood coming in, and be more open than ever before as Alinghi – reigning champions and two-time winners – step back after five seasons from the circuit to pursue other interests, offering up the tantalizing prospect of existing and new teams making their way on to the podium for the first time. For Alinghi’s part, they leave on a positive note: “Throughout our time sailing the Extreme Sailing Series, the racing has been electrifying, the venues iconic, the crowds huge and appreciative, the organisation superb, and the sport, most of all, exciting, competitive and a joy to be a part of,” said Alinghi team principal, Ernesto Bertarelli.

Britain’s match race supremo Ian Williams will return to GAC Pindar sharing skipper duties with Seve Jarvin, while double Olympic champion Roman Hagara will remain at the helm of Red Bull Sailing Team – his goal is quite simple: “Our objective is to win the Series!”

SAP Extreme Sailing Team headed up by Jes Gram-Hansen and Rasmus Kostner from Denmark will be looking forward to their fourth season with the ambition of improving their performance in the overall standings this year: “Both myself and Jes Gram-Hansen return after a tough year in 2014 knowing we can perform better,” commented Køstner. “We have high expectations to become a podium team, that focus hasn’t changed. We are coming back with an energised crew and an intense training schedule to prime us to fight for every point.”

The Series will see an Italian entry: Lino Sonego Team Italia, fronted by multiple world champion Lorenzo Bressani; Gazprom Team Russia will return for a second season led by Igor Lisovenko and Oman Air will be back, at the helm Stevie Morrison from the UK. From the same stable, two-time overall Series champions and 2014 runners-up, The Wave Muscat, with Leigh McMillan once again at the helm. Having ‘tested the water’ at the Istanbul Act in 2014, Team Turx skippered by Edhem Dirvana will be on the starting line for 2015: “We are finally achieving this great honour of being the first Turkish sailing team to compete at this level,” said Dirvana. “The Extreme Sailing Series has been developing every year and it is one of the most difficult races to win. Over the years this circuit has pushed sailing to be real high performance sport. To become a part of it is every sailor’s dream.”

For Act 1 in Singapore supported by Aberdeen Asset Management, Team Aberdeen will be racing for their country as the ‘home’ team skippered by Nick Moloney, who first competed on this circuit in its inaugural year in 2007.

An 11-Month World Tour
For the third successive year, Singapore supported by venue partner, Aberdeen Asset Management, will host the opening Act starting on 5 February. It will be the fourth time the Extreme 40s have raced in Singapore, racing within the confines of the ultimate city-centre stadium on the world-famous Marina Bay. Muscat, the capital of the Sultanate of Oman, will host Act 2 and China’s ‘Olympic Sailing City’ Qingdao, Act 3 – both these venues have been long-term supporters of the circuit, hosting an Extreme 40 Act since 2011. The UK Act will, once again, be staged in Cardiff moving to an earlier calendar slot in June before the fleet head to 2015’s new venue: Hamburg, Germany. It has been five years since the Extreme 40s have raced in Germany – and the first time in Hamburg – but with a nation of sailing lovers, the event will prove popular. From Germany, it’s on to St Petersburg, Russia’s cultural capital for the second successive season, then Turkey before the final Act in Australia in December.

Land Rover Above and Beyond Award
Hannah White, Land Rover’s Global Brand Ambassador, presented the overall winner of the 2014 Above and Beyond Award at the Düsseldorf Boat Show. The Award, presented to the team or individual who has demonstrated the finest examples of skill, sportsmanship and strength of mind at each of the Series Acts, was hotly contested throughout the 2014 season, but the team who won or was cited in 5 of the 6 Awards was from Oman Sail. As Chairman of the Above and Beyond Committee, Hannah White commented, “As a syndicate of two teams, their commitment to the event, the sport and their performance throughout the entire season both on and off the water is unprecedented. They set a fine example to the world of sport for their professionalism, performance and camaraderie. We look forward to continuing the Above and Beyond Award in 2015.”