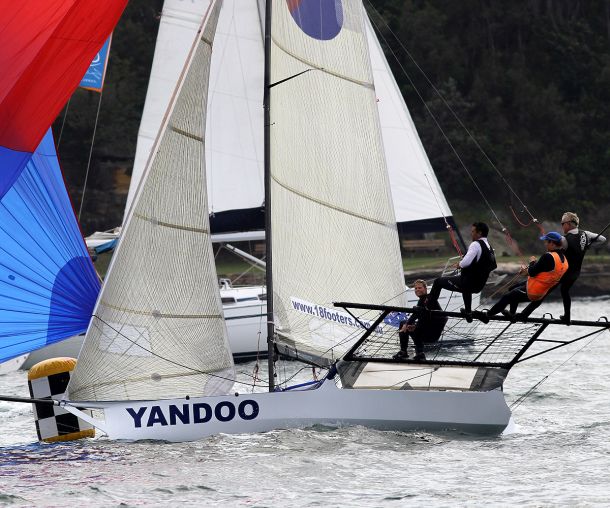 The annual Queen of the Harbour 18ft Skiff race took place on Sydney Harbour today and resulted in Gayle Beck being crowned the Queen of Sydney Harbour for 2015. Gayle, with the help of her crew mates John Winning, Jim Beck (her husband) and Cameron McDonald came home strongly in Yandoo after trailing in third place over the first lap of the course.

To avoid any possible injury with very strong winds expected to hit Sydney within the hour, the starter sensibly elected to run the race over two laps of a windward-return course between Clarke and Shark islands.

From the start, Lumix quickly established a lead and led De’Longhi, Yandoo and The Kitchen Maker (John Sweeny) over the first lap of the course. Lumix continued to hold what appeared to be a race winning lead at the final windward mark but a tangle on the spinnaker set cost the team so much time to reset that both Yandoo and De’Longhi raced past on the run to the finish.

It was important for the club to stage the race despite the approaching storm. Since the formation of the Australian 18 Footers League in 1935, the annual ‘Queen’ race has been one of the most important events on the calendar and still remains that way.

In the very early days of the concept, the club, through the efforts of the various ladies competing in the races, was able to donate substantial funds towards the children’s hospital. A wing of the hospital was actually named in honour of the contribution.

Next week’s race is Race 10 of the Club Championship.  The club’s regular ferry will follow the race, leaving Double Bay Wharf, alongside the clubhouse at 2.15pm.