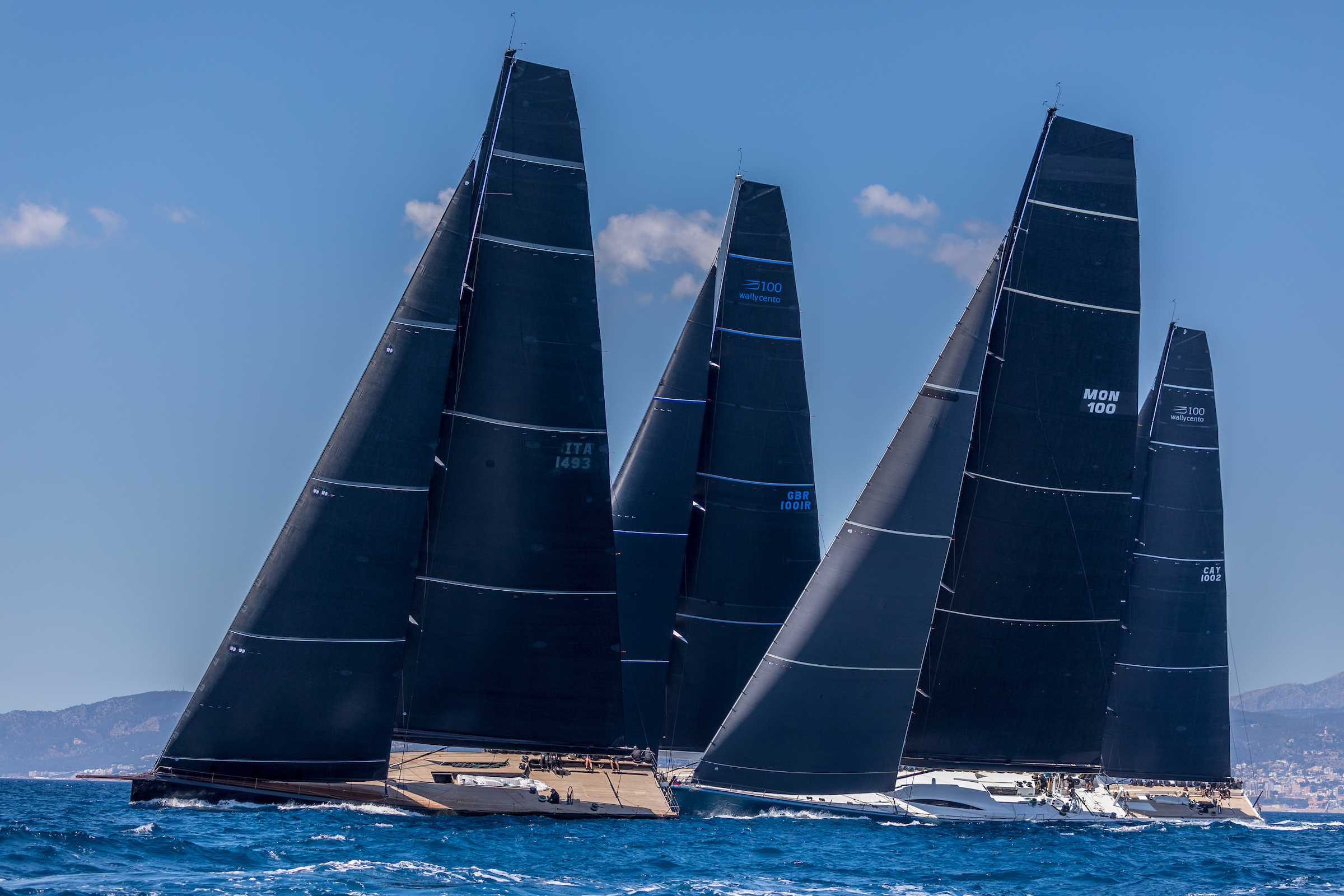 IRC maxis on the Bay of Palma - Nico Martínez pic

Spain: The Wally Cento Galateia retains an unbeaten record at the 18th edition of PalmaVela and after three races leads the IRC-IMA Maxi fleet by six points with two days of racing to go.

After conclusively winning Thursday’s blustery 28 nautical miles coastal race, today’s two windward-leewards yielded another two victories for the crew, which counts on the productive partnership of Murray Jones and Jordi Calafat in the afterguard.

However, the Galateia crew had to defend hard in the closing stages of the first race. A problematic spinnaker drop at the first leeward gate had a knock-on effect all the way through the light airs contest. They only just escaped through the finish line to win by 14 seconds, just ahead of Wally Cento rival Magic Carpet Cubed.

After the wind all but disappeared, the RCNP race management team made the right decision to hold out for a couple of hours for a second windward-leeward.

Everyone’s patience was rewarded with a decent contest, which Galateia won more comfortably, three minutes ahead of Andrea Recordati’s Wally 93 Bullit on corrected time. The Italian flagged Bullit has Luna Rossa’s Francesco Bruni as tactician and is now up to second overall sharing the same nine points aggregate as Magic Carpet Cubed.

Murray Jones, Galateia six times America’s Cup winning tactician reported “We made the first race a lot closer than it should have been. We had a bad drop at the leeward mark the first time. The string came off, so we had to do a manual drop.

“We nearly trawled it, it went in the water, but luckily was not right in and by the time we recovered the other boats were really close behind. We held them up on the beat and because of that we used a heavier chute on the second run.

“It got very light and we were really struggling. It was neck and neck. We were just trying to stop them rolling over the top of us. For the second race, we started on the pin end and wanted to go left. We peeled off Magic Carpet and plugged the left quite well. Jordi (Calafat) was giving us lots of good local knowledge advice.”

Jones is clearly enjoying racing with livewire Calafat who he sailed with at Alinghi.

“It is so great sailing with Jordi again. We spent so much time together at Alinghi but have not really raced together much since then. We worked a bit on Maxi 72 projects but not really racing. He is just fantastic on the boat, he never stops. He is great here. He does not stand still and has an opinion about everything – and he is usually right.”

Galateia is finding some light airs speed her crew felt was previously lacking: “The boat is going well in the light too, upwind and downwind so we are pretty comfortable with our speed, we are pretty confident,” Jones acknowledged.

After their first day of racing, honours are shared evenly in the ORC big boat class, Class 0 where three teams all share the same six points aggregate.

The successful DK46, which has won her class at Copa del Rey Mapfre four years in a row, leads on countback racing here as Urbania, guided Andalucian Iñaki Castañer. Winners of the first race today was the Farr designed TP52, Aifos 500, which has Palma’s round the world Vendée Globe racer, Javier ‘Bubi’ Sansó on board.

“We had two good races. We won the first one in 10-11 knots when it was pretty flukey and then after a two hour wait, we had a stronger wind than we expected and started on the light headsail, when it should have been the medium light.

“We had a few problems in the manoeuvres, so we struggled a little, but it was good on the part of the organisation to have us wait the two hours, because that second race was a good one. Altogether it was a good start for us on this boat where some of us are pretty new to it.”

These two teams are joined on six points by Estonian Rolf Relander and the crew of the Cookson 50, Furiosa, which has landed two third places so far.

With two first places yesterday and a second gained from today’s one race, Nadir leads the ClubSwan 42 division, while in the Dragon and J/80 fleets, the leaders are match racing world champion Torvar Mirsky and double Olympic silver medallist Natalia Vía-Dufresne’s crews respectively.