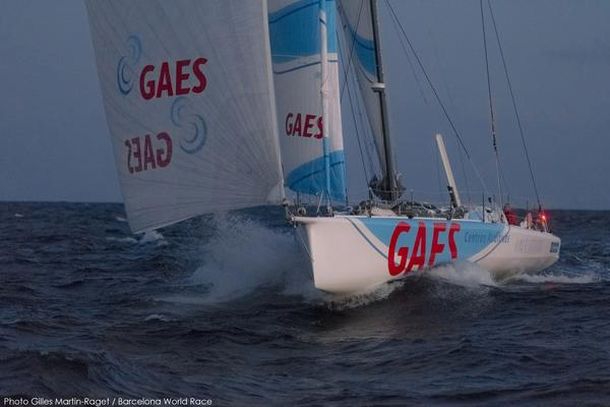 Lining up to pass between the Cape Verde Islands, sprinting south between Sal Island and Sao Nicolau and then Santiago and Fogo, Anna Corbella and Gérard Marin on GAES Centros Auditivos are expected to lead the Barcelona World Race when the fleet negotiates the archipelago tonight.

Being ranked top of the table today is a fitting present for Marin who took a few moments to accept best wishes for his 33rd birthday. The Spanish duo, the only mixed male-female crew in the fleet, has profited short term from their early move to the west yesterday afternoon. But they have also been sailing fast throughout today in the right direction, whilst some of their nearest rivals are investing in miles to the west, seeking a future gain.

This morning’s leader Hugo Boss, Alex Thomson and Pepe Ribes look set to go west of the island group, computed to be fourth for the meantime, whilst Cheminées Poujoulat in third trail Nutrogena who are second. Cheminees Poujoulat's Jean Le Cam should this evening pass the point which he and Bruno Dubois were dimasted in the last edition.

The GAES Centros Auditivos duo were about 80 miles north of the entrance to the islands in the middle of this afternoon, racing in brisk trade winds which are still reaching 23 or 24 knots, allowing continued high speed running, although Neutrogena’s Spanish co-skipper Guillermo Altadill noted that the sea conditions were bumpy and crossed when he spoke to Race HQ in Barcelona this morning.

Corbella, who raced the 2010-11 edition with Dee Caffari, re-affirmed today that their objective is first and foremost to finish this race rather than harbouring high ideas of winning, but through the first week and one day of racing, the duo have not really put a foot wrong. She noted today that their sails are a ‘secret weapon’.

“ Our secret? We have some really good sails and we always push the 100%” quipped Corbella. They have made their own decisions so far, clearly not content to simply pace or shadow the leaders. Their two year training programme as part of the FNOB crews prior to the race included two Transatlantics last year as well as protracted period of practice off the NW of Spain. Rather than go east with Hugo Boss at the Canaries, Corbella and Marin stayed conservative, sailing east of Grand Canaria  and west of Lanzarote and Fuerteventura.

“Going through the Canaries was a good decision, not too risky. We don't want to risk anything. Our goal is not to win as it is for most of the teams. So we don't need to take risky decisions as they will have to. We take the decisions using the brain, we don't want to break anything, neither do we want to be in the wind shadow of an island”

Asked if she was surprised to have been holding their own nicely with the lead group since the start Corbella said: “A little bit. We did not really know at the beginning that we could have the same speed as the boats in front. That is a surprise for us. Once we saw that we have continued like we that, we are not going to slow or give a present to the other boats!”

Some of the gains might be short term. The big changes in the mileage deltas on the official ranking are partly due to the theoretical course which links waypoints down the west African coast. This anomaly greatly benefits teams which are converging with that theoretical route and correspondingly the deltas rocket upwards when crews are racing west, away from that line.

Now the leaders are already looking down the track at a crossing point for the Doldrums where the convergence zone is at its narrowest. Conventional wisdom has west almost always best. In this present case the winds remain stronger in the west for longer as they approach the Doldrums. But the trade winds are forecast to slacken off to more like 15-20kts – still useful enough – by tomorrow.

In fifth the German-French duo on Renault Captur are lacking company, at 145 miles from the second and third placed IMOCA 60s and having One Planet One Ocean/Pharmaton the same distance behind. Indeed the fifth to seventh placed boats are nearly equidistant apart.

Skippers Quotes
Anna Corbella (ESP) GAES Centros Auditivos:
Surprised to be doing so well with leaders?
A little bit. We did not really know at the beginning that we could have the same speed as the boats in front. That is a surprise for us. Once we saw that we have continued like we that, we are not going to slow or give a present to the other boats. Unless something happens we keep pushing like we are, we want to finish, we don’t want to crash, we want to finish the race for sure. We are going to take care. Our routine is very easy, it is three hours on and three hours off. We sleep three hours and work three hours. It has been like that since the beginning. We will maybe get some time in the Doldrums to rest a bit more. The pace has been quite stressful.
Making choices?
We talk and we decide together. We have the same objective, we think, we talk we never take a decision in just five minutes, and at the moment we are all together with the leaders, so it is easy.
“Our secret? We have some really good sails and we always push the 100%. Going through the Canaries was a good decision, not so risky. We don't want to risk anything. Our goal is not to win as it is for most of the teams. So we don't need to take risky decisions as they will have to. We take the decisions using the brain, we don't want to break anything, neither be downwind of an island”

Guillermo Altadill (ESP) Neutrogena:“ The conditions are variable and with crossed waves that is why they have been steering all the time rather than using the autopilot.”
“ We knew it would be close with the three boats and so far there have not been tactical options, no openings really, so all the fleet are doing the same things. We have the same software, the same weather information, but that will be after the trade winds, someone will be pushing harder and then it will be more spirited.”
“ Through the Canaries we more or less knew what was going to happen. I saw one option to go between the African Coast and the Canary Islands and saw Hugo Boss go and line up to do it but I was more concerned to stay with the fleet. He made a gain but not so much.”

Ranking at 14:00 UTC THURSDAY 8TH JANUARY 2015
Please note that some of these figures may be anomalous as they measure to a waypoint to the east of the fleet’s current optimum course and do not measure in the direction of travel.